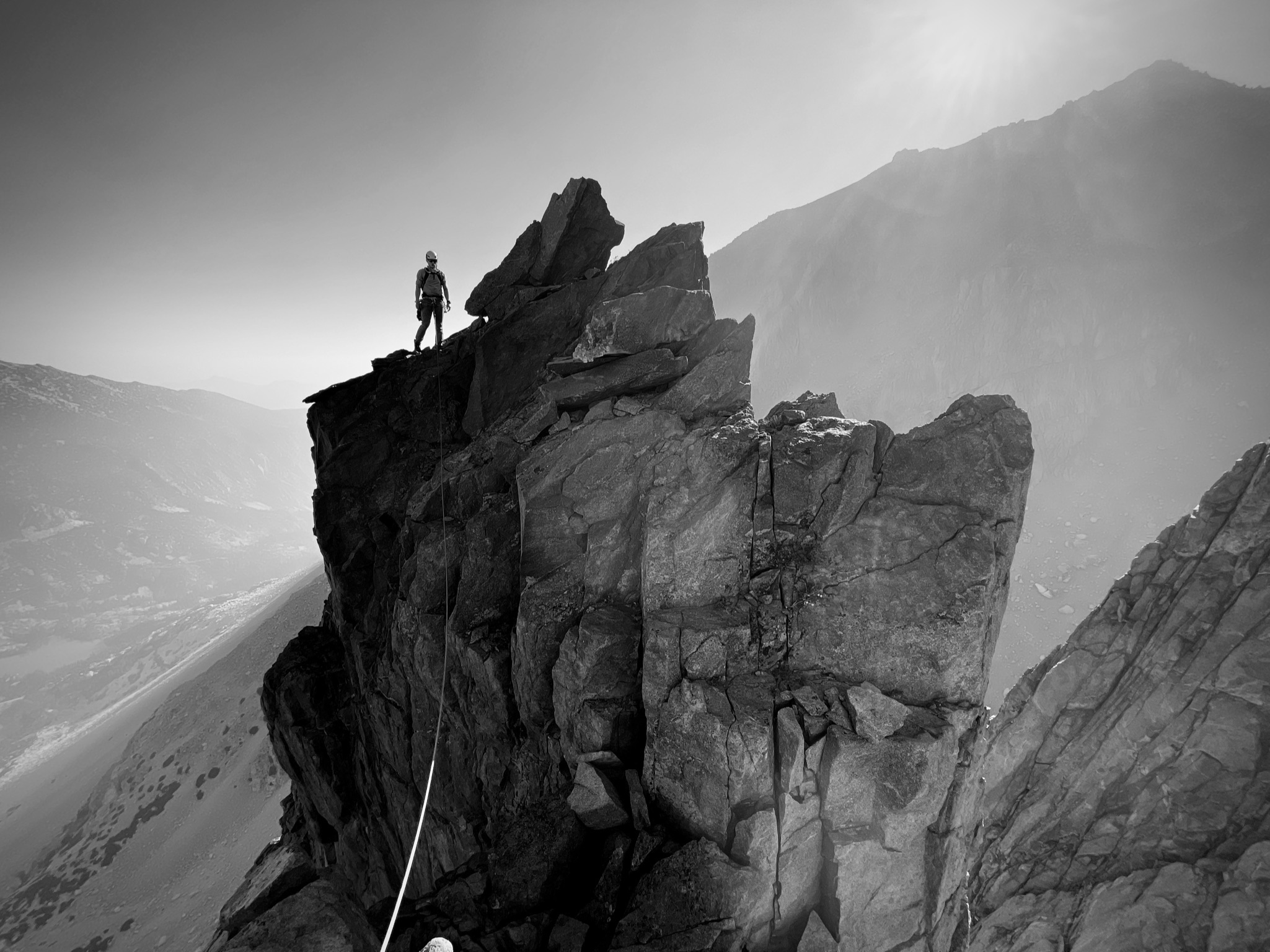 Posted at 09:20h in Adventure, From the Range of Light & Fast by SMG Office

As the days get shorter, the nights get colder, and the fall colors begin to show in the Eastern Sierra, we would like to look back over the past summer’s busy guiding season to highlight some of the memorable experiences we have had in the mountains with our guests.

Despite having a below-average snowfall during the winter of 2020/21, our winter staff had a very successful season skiing, teaching avalanche courses and climbing ice, and we skied right up until the end of April. I was even lucky enough to ski winter powder and spring corn snow in the same run on a fantastic 3 day trip into the Sawtooth Range with Chris and Rob!

But the heat turned on in early May, and with such little snowpack left, we all made the quick transition from ski boots to mountain boots to make use of the excellent early season alpine climbing conditions.

This May saw a flurry of activity in the High Sierra, with many ascents being made of some of the classic early season routes that benefit from some, but not too much snow. Early in the month, I took a very motivated young aspiring alpinist up Mount Whitney’s Mountaineers Route, and Michael went over to the West side of the Palisades and got on top of Thunderbolt Peak.

By the end of May, it truly felt like summer in the mountains, with dry approaches and mild temps making for perfect conditions on the longer rock routes in the range. While we are normally skiing well into May, exploring the high couloirs as access improves and traversing the range on overnight tours, we were just as happy to get out the rock shoes and do some climbing. I had a great week with Brian climbing the North Ridge of Lone Pine Peak in a classic carry-over style, followed by the East Buttress of Whitney (yes, we were both pretty wiped by the time we got to the Portal!). Geoff climbed the Thunderbolt to Sill section of the Palisade Traverse with Scott, and Bernd and Jen rallied up the East Arete of Mount Humphreys.

Once June rolled around, it felt like we were already halfway through summer after all of the trips that had already been run! Bear Creek Spire and Mount Russell received a lot of attention, with multiple ascents being made of both peaks, and I got to take Cinda and Jane (the Badass Ladies Club) on a whirlwind itinerary that included Lone Pine Peak, East Arete of Humphreys and the North Ridge of Conness. I hope to be in half as good of shape when I grow up!

A standout from the summer was the successful Wounded Warriors program that took place, which brought veterans to the mountains for a facilitated challenge on the cliffs of the Eastern Sierra, and Geoff, Michael and Neil had a great time with the event.

With trails clear of snow and no mosquitos in sight, our backpacking guides got after it too in July, with pack-supported hiking trips into the Ritter Range, an Evolution Loop and an epic Kearsarge to Whitney trip along the JMT. We also had a number of big family trips who were a blast to work with. Geoff, Michael and I got to work with the Myers Family, climbing Mount Russell via both the Fishhook and the East Ridge, and Danny, Geoff and Neil took a plush pack-supported trip to climb Ritter and Banner with the Howard Clan. Missing the snow a bit, I took a trip to the Cascades to climb a number of quality alpine routes with motivated guests, but was happy to get back to the Sierra where the approaches are much easier and the rock a lot more solid!

While we love taking folks into the mountains to climb their dream routes, that desire has to start somewhere, and Geoff and Michael did a great job facilitating the Eastern Sierra Scramblers kid’s climbing camp, getting a new generation of young climbers stoked on climbing.

A stoked kid himself, there is no one as happy to be out climbing as our veteran guide Peter Croft, and he took a number of excited guests up the best cliff around, the Incredible Hulk.

Another one of our guides who just can’t seem to keep her enthusiasm bottled up, Lindsey “The Hamminator” Hamm, took countless trips up Crystal Crag and lapped the North Ridge of Conness a number of times with climbers who were sure to catch a case of her infectious stoke.

August continued to be incredibly busy, with multiple guides in the field most days of the month. Despite the unfortunate addition of wildfire smoke into the area due to the historic fires burning in the north of the state, our guides were able to work around the smoke and still make ascents of Temple Crag, the Hulk, Mount Emerson and the 3rd Pillar of Dana amongst many others.

September is poised to be just as productive, with trips to Charlotte Dome (perhaps the best rock climb in the entire range in this humble guide’s opinion), Mount Whitney and Russell, and a Palisade Traverse to cap it all off.

This has been one of the busier summers in recent memory, and the guide staff feels fortunate that we have been able to work with such amazing guests, having rewarding and challenging experiences in the mountains, and staying safe for yet another year in the face of the pandemic. While we are all looking forward to a bit of rest, the Fall is prime time for rock climbing, and I’m looking forward to a trip up El Cap and a 3 week sport climbing trip to Greece, Geoff heads to the desert to instruct AMGA courses, Hamm is bound for the Utah sandstone, Bernd is enjoying life on the Eastside and Michael stoked for some rock sending in Pine Creek Canyon before the snow starts flying and the ice starts forming.

Thanks to everyone who has made this season what it is, we’ll see you back in the mountains again soon!