We are in the full steamy heat of the summer season. Climate change is real and we have seen multiple days in the past month with high temperatures in Bishop above 105 degrees. Some days in the mountains have felt too hot and lately I have not had any need to zip myself completely into a 40 degree sleeping bag, even at elevations up to 12k’. It’s been a good summer though. More snow around in early season than in the last 5 drought years. A slightly better winter for snowfall and a stormy late spring helped to create those conditions. Unfortunately, it was all too little, too late for preserving what little is left of our permanent snowfields, glacierettes, glaciers, and alpine ice couloirs. 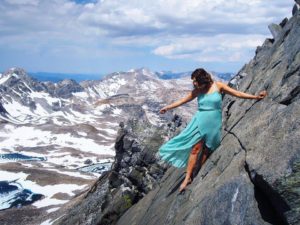 The North Couloir on North Peak still contains decent ice to climb, but by the time it fully

emerges there will likely be significant rockfall hazard. All of these, like other features that lost their alpine ice in earlier times, can still be climbed on frozen nevé in late spring/early summer, depending on the year. Some climbs may form ephemerally in late spring (or late fall after snowfall and subsequent melt) as water ice climbs. These may both be quite enjoyable, but not the same as climbing 3-5 pitches of pure, solid, reliable alpine ice. By mid-summer these places become death traps as running water lubricates shattered bedrock and loose stones are dislodged. Climbers are highly vulnerable to rockfall hazards in these terrain features, and the problem does not improve until a strong snowpack and sustained freezing temperatures lock everything back into place for the winter/spring.

Once alpine ice is gone, it takes a long while of favorable weather conditions to re-form. The ice we recently lost had been there for many thousands of years. The reasons we are not likely to see lost alpine ice return to the High Sierra are twofold:

This report will probably assume that you are no longer using older informational resources to choose your late summer classic alpine ice objectives. Be warned that generally from now on, attempting to climb alpine couloirs this time of year through at least October will be highly dangerous and relatively unrewarding. We stopped guiding in couloirs of the Palisades this year in early July, just before a fatality occurred in the U-notch Couloir. We do not have any information to speculate about the cause of the climber’s fall, but if there was rockfall involved it would not be in any way surprising. If you are interested in climbing northern Palisades 14’ers we recommend access via Bishop Pass and Kings Canyon NP. The access to Glacier Notch for climbs of and descents from Mt. Sill back to the east is fairly “un-classic” at this point, in our opinion.

As for the rest of the range, It is a great time for getting out there and going light and fast. Sleeping bags have been practically optional for sleeping comfortably below 11,000 feet. It is recommended if planning to hike or climb in the sun to get an early start and get as much as possible done when temps are cool, if possible. Drink lots of water and consider supplementing with electrolytes.

Smoke is becoming a slight nuisance. The Sand Fire is well-contained at this point but it, along with the Soberanes Fire are still putting a haze into the air. We also have some new local fires: the Clark Fire, which has affected all climbing in Clark Canyon and the Rock Creek Fire, which has once again threatened the community of Small Meadows after a fire last year destroyed dozens of homes there. We can expect that fires and smoke will be a big consideration for Sierra recreation into the foreseeable future.

Well, I guess this report contains a bleak outlook and some nostalgia for the past, so let’s end by saying with utmost optimism that this has been, and remains, an incredible season for alpine rock climbing and wildflowers. Compared to last year the smoke is completely tolerable so far. People are more psyched than ever before to be in the mountains, and while we are more likely to run into each other out there, this can also be a good thing.

Reminder for Mount Whitney climbers that the Whitney Portal Road has construction this year that will cause delays and inconveniences in accessing the Portal.

I hope you enjoy the rest of summer and we will be in touch again with this report as conditions change. 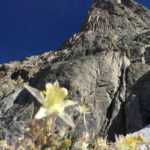 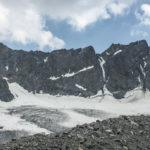 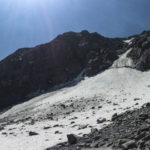 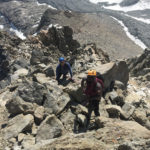 Climbing Winchell with Thunderbolt Glacier below. 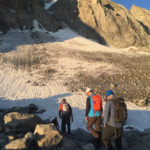 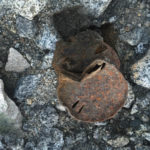 Artifacts from the melting glacier. 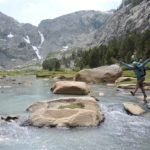 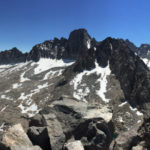