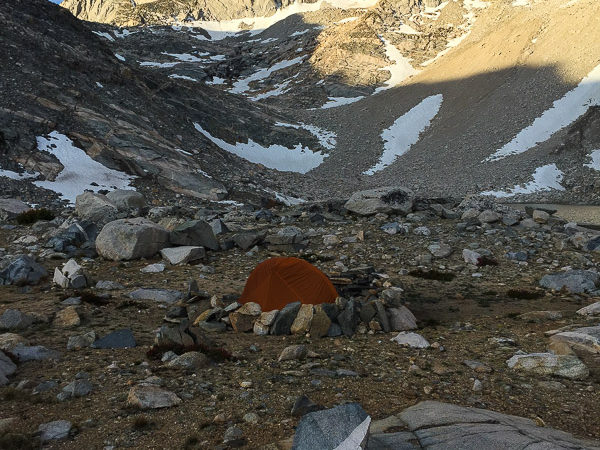 Hope you are all enjoying summer at this point. We are! After the driest winter on record, the High Sierra experienced one of the wettest calendar months ever. The town of Bishop hit May records for amount of rainfall and consecutive days with precipitation. In June, mountain weather has remained somewhat unusual with daily high temperatures spanning more than 30 degrees F in many locations. In Bishop, 17 days have hit highs in the triple digits, three of those days surpassed 105 degrees, and one hit 108 degrees. We have seen up to 1-2 inches of rainfall over the last month especially in the northern part of the area. This is from the very frequent thunderstorm activity that has dominated the weather pattern, and looks to continue to do so through at least the first part of July.  Smoke from the Washington Fire near Markleeville has made it down to the High Sierra on some days, particularly days where the weather would otherwise be nice and thunderstorm free. The mosquitos are out in full force which, for those who know about Sierra mosquitoes, is pretty little to complain about. As usual, they are confined to narrow elevation bands and wetter terrain. We will have to see if continued hot and stormy weather makes them linger in spite of the mega-drought we are experiencing. 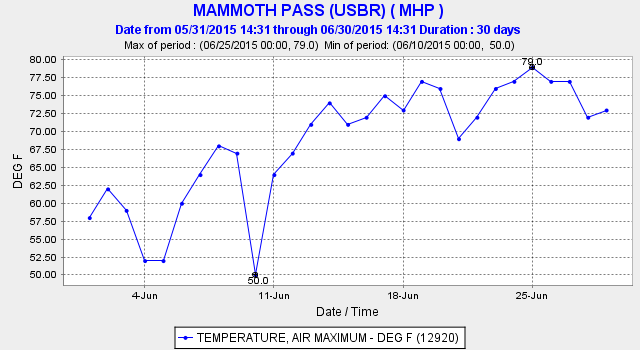 Backpackers and general mountain travelers are out and about. The PCT is a wildly popular place to be this year. Lakes, rivers, and streams were briefly swollen from the melt-off of May snows but flows have dropped considerably in the last couple of weeks. Water sources for drinking abound. Alpine rock climbers can enjoy long, hot days out there with light approach shoes and in most places can leave the ice axe and crampons behind. Climbs like Bear Creek Spire’s North Arête and Mount Whitney’s Mountaineer’s Route can now be done without bringing the extra weight of spiky equipment or getting feet wet at all.

For alpinists that fancy the snow and crampon type of clambering, we have some important observations to share. Most of the snow still clinging onto mountain slopes fell in May. This means that it is not very well consolidated and often lies upon rock rather than snow or ice. The snow is saturated with water from melting and rain. Low temperatures to ridgetops have been well above the freezing point and they will continue to be for many weeks. What this means is that climbs in snow/ice couloirs are currently out of recommended condition. We have been seeing massive regular rockfall releasing naturally as the mountains shed snow, often seen during or soon after rainfall which percolates into cracks and lubricates large detachments. A big one was caught on camera from Cloud’s Rest recently (certainly not a predictable occurrence, but interesting and cool to watch from afar. Fortunately, none was hurt.). Any remote hopes for climbing snow and ice couloirs in early season are diminishing. It is likely that by the time it freezes up again at night we will be back to the grim scene we saw last summer, with dirty, dying glaciers, disappearing snow fields, and sublimated ice climbs. To be an alpine climber in the Sierra these days is to be all too familiar with the recreational impacts of a changing climate. It’s a first world problem, I realize, but we don’t write this report to talk about the global food shortage and rising sea levels. On second thought… we need food for energy to climb mountains and if sea levels rise then all our mountains are getting lower. Now I do have an ice axe to grind!

Hope this information helps you to plan your next foray into the mountains. As bad as it is in some places, it is as good as it gets in others. We have certainly been making the best of it and hope you will too. Weather extremes demand some patience and acceptance. Look forward to what the future may bring… a mega El Niño! 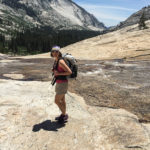 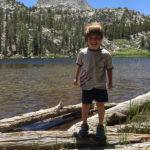 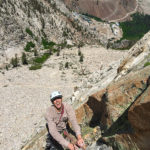 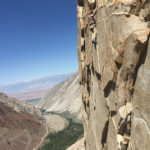 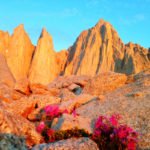 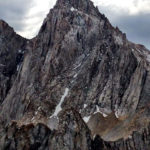 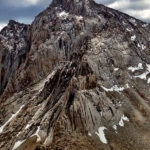 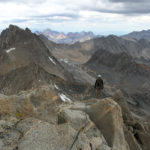 Racing the thunderheads on Bear Creek Spire. We summitted but the sky won this time. 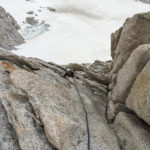 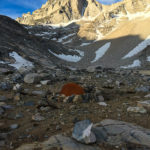 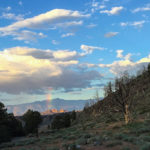