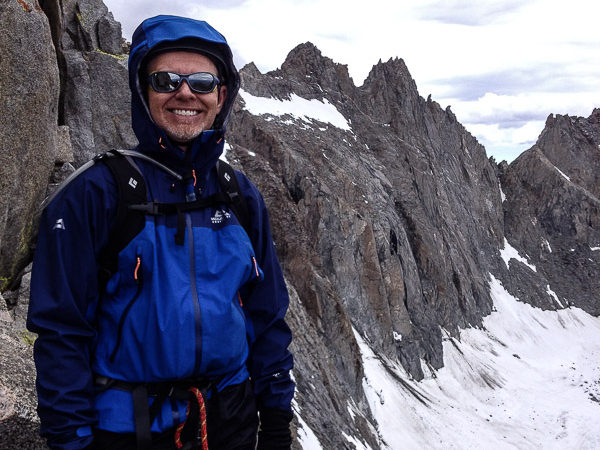 Quick update to our last report on July 1, as things in the high country are changing quite rapidly. As we have been reporting, the Sierra remains in a steady stream of daily thunderstorm activity from monsoonal air flow and warm, moist air rising that condenses clouds, resulting in precipitation and electrical activity. Precipitation has been in the form of intense short or, in some cases, up to a couple sustained hours of rain or hail. High and low temperatures continue to fluctuate wildly.

All of this is contributing to a high degree of instability in the Sierra. Our last report talked about a massive rockfall event on Cloud’s Rest. On 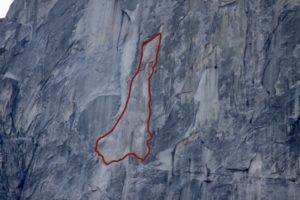 Missing rock on the Regular Northwest Face of Half Dome.

July 4th or thereabouts, an 800 cubic meter flake exfoliated from the Regular Route on the Northwest Face of Half Dome in Yosemite, rendering the route unclimbable (at least for now). More details on the Supertopo forum, where the story emerged, about how a team of local Eastside climbers had their upward progress thwarted unexpectedly. Park geologists say that the frequent rains likely contributed to this mass wasting event. Find out more updated info from the Park on this event here. In the High Sierra, the rains are having similar effects. We witnessed a house-sized chunk of granite peel of of the north side of Bear Creek Spire after a thunderstorm a couple weeks ago. Couloirs in the Sierra are seeing signs of a lot of smaller rockfall. Even a golf ball sized rock traveling at speed can be deadly, and what we are seeing is a sign that the mountains are more unstable than usual for mid-July. We consider the U and V-notch Couloirs in the Palisades, for example, to be out of reasonable condition for climbing at this time. 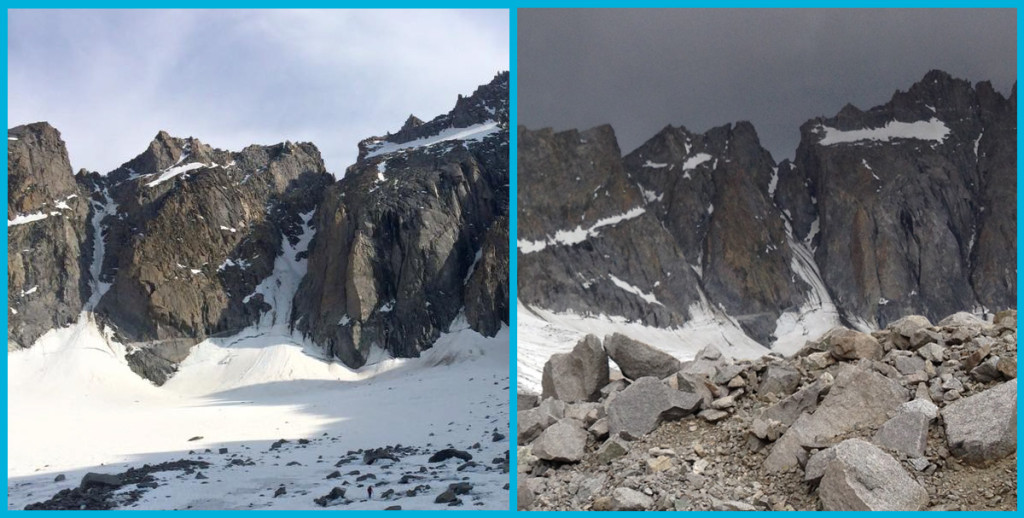 On the left, a photo from Forrest Schwab of the U and V-Notch Couloirs taken June 28th. On the right, the same terrain on July 4th in a photo from Viren Perumal showing significant signs of rockfall into the couloirs.

For mountain travel in general, check the weather forecast before you go. It’s not very accurate most of the time, but it can give you an idea about what you may be getting into. Somehow weather forecasters can be completely wrong more than half of the time and still keep their jobs. I guess it’s because they are the best we have. Most of us get complacent and expect sunny days for weeks at a time in the Sierra, but we are seeing a very wet extended period that may last well into summer this year. Plan for the best, and prepare for the worst. Hope to see you out in the high country, or down in the lower country as the case may be.  ~Howie 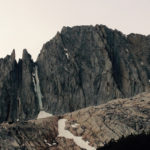 The North couloirs on North Peak on July 2nd. This one is a real tragedy. The right couloir was the holdout that we could always rely on for summer alpine ice and it is one of the few easily accessible in a day from the car. This photo shows that the upper couloir, which melted out for the first time in ice climbing history, near the end of last season has already begun to melt out again. This exposes loose rock that comes raining down the couloir. 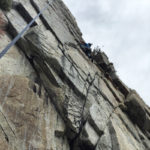 Making the best of a poor forecast. Alex wanted to climb the 3rd Pillar of Dana but due to thunderstorms in the forecast we settled for climbing 12+ pitches at 2 different crags in the Mammoth Lakes basin. This is a classic 10a at the Dike Wall. 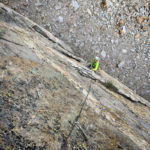 Taylor wanted to do some alpine multipitch adventure climbing, but the weather forecast was awful. So we stayed around 9000′ and got in 6 pitches of 5.10-11 at the Brownstone Wall before the rain and hail beat us down and out. 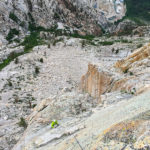 Mine In the Sky, Brownstone Wall, Pine Creek Canyon 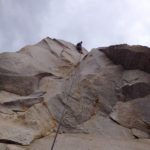 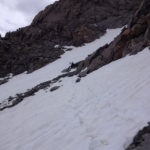 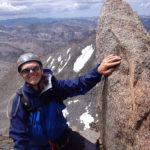 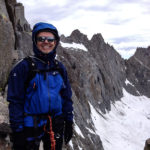 Palisades. Note the still disappearing hanging snowfield on North Palisade and the debris down on the glacier. 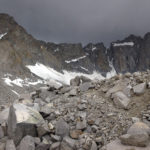