It is that time again when we start getting calls and questions asking us about mountain conditions for alpine climbing and general mountain access. We have been running this report for the last 7 or 8 years, but we hope to up our game this year with this new website format to give you the best, most useful, and most up-to-date information on the web about conditions in the High Sierra.

After the record breaking winter of 2010-11, we are in the grip of a 3-year winter drought. During this time, we have seen glaciers and snowfields retreat dramatically. Couloirs choked with ice in September are barren of snow and ice by July or August. Even some of the most reliable ice couloirs in the range, such as in the Palisades, North Peak, and Dana Couloir have been out of condition by mid to late summer when snow and ice melt back from the top and sides and send rocks careening down upon climbers with high frequency and random timing. U-notch was a good example last season, as we stopped climbing it by mid-July due to snow melt and warm temps so intense that it created a “river” flowing down the couloir. This is partly due to warm temperatures, but also comes from the fact that the old alpine ice has disappeared. Alpine ice is is more resistant to disappear than seasonal snow. Snow resting on ice disappears slower than snow on rock. The disappearance of alpine ice has led to an increase in the rate of snowmelt, and low snow years cover the ice with less snow. For these reasons, alpine ice is becoming exposed earlier than ever in the summer, and it is causing the ice to disappear. There are fixed anchors in many couloirs that used to be at arms reach that are now 15-20+ feet above the ice surface. The game has changed for alpine ice climbers in the Sierra. Reliable alpine ice takes multiple seasons of aging, metamorphism, and pressure from overlying seasonal snow to create. There are some ice climbs in the Sierra that are gone, and won’t be back in our lifetime.

This season, we saw significant ice exposed in the Palisades in late-February and even again in April, when snowpack is supposed to be at maximum.

At this time, we have an interesting alpine situation. Below 10,000 feet there is little snow. It is easy to walk through lower elevations with only a few patches of snow here and there in shaded and sheltered locations. Alpine lakes at these elevations have melted or are starting to melt such that they are probably no longer safe to walk on. Above 10,500′ there is actually quite a bit of snow coverage. Snow surveys have found 50-60% of average in a number of high locations north of Big Pine Creek. Skis or snowshoes are advisable for traveling over high passes. Crampons and ice axes may be necessary as well. Expect easy step-kicking and cramponing on high elevation, steep North aspects, and melt-freeze conditions on any sun-exposed slopes in the range that still hold snow. The coming 6-8 weeks will be a great time to get out and enjoy long days in the mountains with relatively easy approaches and good snow/rock climbing.

For ice climbers you have only a few options in strategy:

The flip side of our changing climate is that alpine rock climbing is arguably much more of a signature draw for the Sierra than ice climbing is, and the lack of snow is making more of the season possible to approach or climb in approach shoes with aluminum crampons, or no crampons at all. This allows the freedom of going lighter and faster. This is certainly a bright side to the situation, for those mourning the loss of our glaciers, snowfields, and ice couloirs.

As for access, all mountain roads are open at this time.

We hope this report will help you with your decision making in ice couloirs this season. Please feel free to comment and ask specific questions that we do not address. Check out these photos to help you get up to speed with what we have been seeing out there this winter and spring. Good luck and be safe with all of your Sierra Mountain endeavors. And stay tuned for more updates as the season continues! 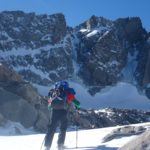 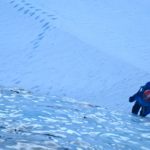 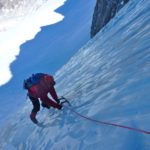 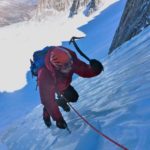 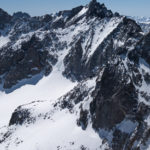 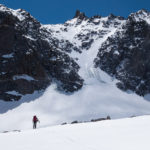 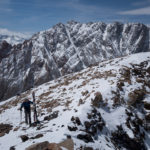 May 8, 2014 – Nearing the summit of Mt. Locke, Mt. Emerson behind. Emerson North Couloir not fully filled in at the top. 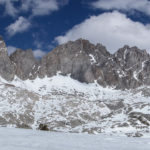 Palisades from the west. late April 2014 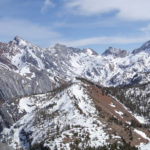