After a busy Labor Day weekend here, we are coming into our favorite time of year in the Eastern Sierra. The aspens are beginning to turn, the fireweed has gone to seed, the night air is getting crisp and cool, the sun is getting lower in the sky, the days are getting shorter, and the sunlight sparkles a bit more against the granite. These changes signal the coming of fall and we are pretty excited about it. At this time we would like to give you an idea about the conditions to expect in the mountains for your last ventures into the high country before the snow begins to shut things down, likely in the next month or two. At that point we will transition to our Backcountry Snow Report and take it from there.

First of all, an El Niño Watch is in effect. Forecasters at the National Climate Prediction Center have backed the likelihood of an El Niño developing by winter down to 60-65%. That said, the seasonal forecasts still predict normal temperatures with above average precipitation for the southern High Sierra in the key winter months.

This is somewhat encouraging but remember that these ultra long-term climatic forecasts live in the world of fantasy like that which inhabits the imagination of a 4 year old, or internet games. The Farmer’s Almanac for comparison calls for a mix of good and bad news: below average precipitation overall but most precip in November through March, the best time to get big snow for a good backcountry ski season.

We have been very fortunate that after 3 seasons of winter drought we had an overall wet summer and we did not experience the magnitude of fire and smoke that we have in other summers recently. But the dry climate has taken its toll on the most alpine areas of the range. It is incredible to bear witness to the death of Sierra glaciation as we know it. Though glaciers can be pesky and irritating to travel on at times, retreating glaciers and growing, unstable moraines are generally even worse. Above the glaciers, ice couloirs that would be in great climbing condition right now look about as inviting as the Owens Lake looks for waterskiing. Even the Dana Couloir and North Peak couloirs, which have provided at least some good ice climbing this time of year are off of the list of recommended fall activities. I cannot think of a single Sierra alpine couloir that I can recommend to even the most enthusiastic of alpine ice aficionados at this time.

There is always the possibility that early autumn snows will melt and refreeze providing a window of alpine ice climbing this fall, but otherwise you’ll have to wait until the waterfalls freeze this December for real ice climbing. Rumors suggest that (due to unknown reasons) we could see ice climbs form on the Bard-Harrington wall this winter, but having been there a couple weeks ago to check it out (and climb some rock), I was unable to verify this rumor. I will remain skeptical until I see it happen. On the other side of the rumor mill, an Edison representative informed me that a lot is uncertain about the future of Bishop Hydroelectric operations. There is apparently a remote possibility that the Rush Creek Power Plant (and associated Penstock) will be taken offline in the relatively near future. This would be an historic and monumental change to the entire Rush Creek drainage and downstream, as SCE would assumedly be required to remove dams and structures and restore the water to it’s natural course. IF this were to happen, there would be no more ice climbing on Horsetail Falls, as the force of the full flow is too powerful to maintain stable ice in that location.

As for other current conditions, expect to see low water levels in all alpine lakes, streams, and springs. The flow perked up briefly during and after a few weeks of heavy storm activity in late July and early August, and things are actually still looking greener than normal for this time of year. But the effects of drought are evident at this time. Realize this in your travels and planning and you will be fine. Good season to climb alpine rock routes with approaches on snow/ice without the need for crampons and ice axes, and with approach shoes rather than boots. 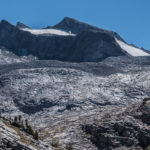 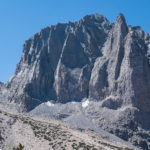 Temple Crag and Contact Pass, August 2014. No snow/ice travel required for any routes. 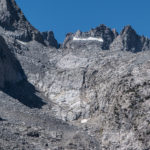 What remains of the iconic hanging snowfield on North Palisade, August 2014.

Palisades Panorama, August 2014. Note the dramatic retreat of the NE terminus (left side in photo). 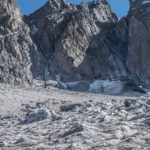 V-notch and U-notch couloirs and the sound of silence. Hello darkness my old friend. August 2014

Growing terminal and surficial moraine on the Thunderbolt Glacier. Not making travel any easier. August 2014 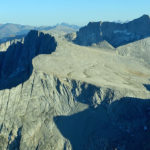 Hope this information is useful and helpful for planning your last forays into the Sierra this summer/fall. We probably won’t update this again until we get our first major snowfall. Enjoy and be safe! ~ Howie