April Fools? Ski Touring in the High Sierra is Alive and Well. 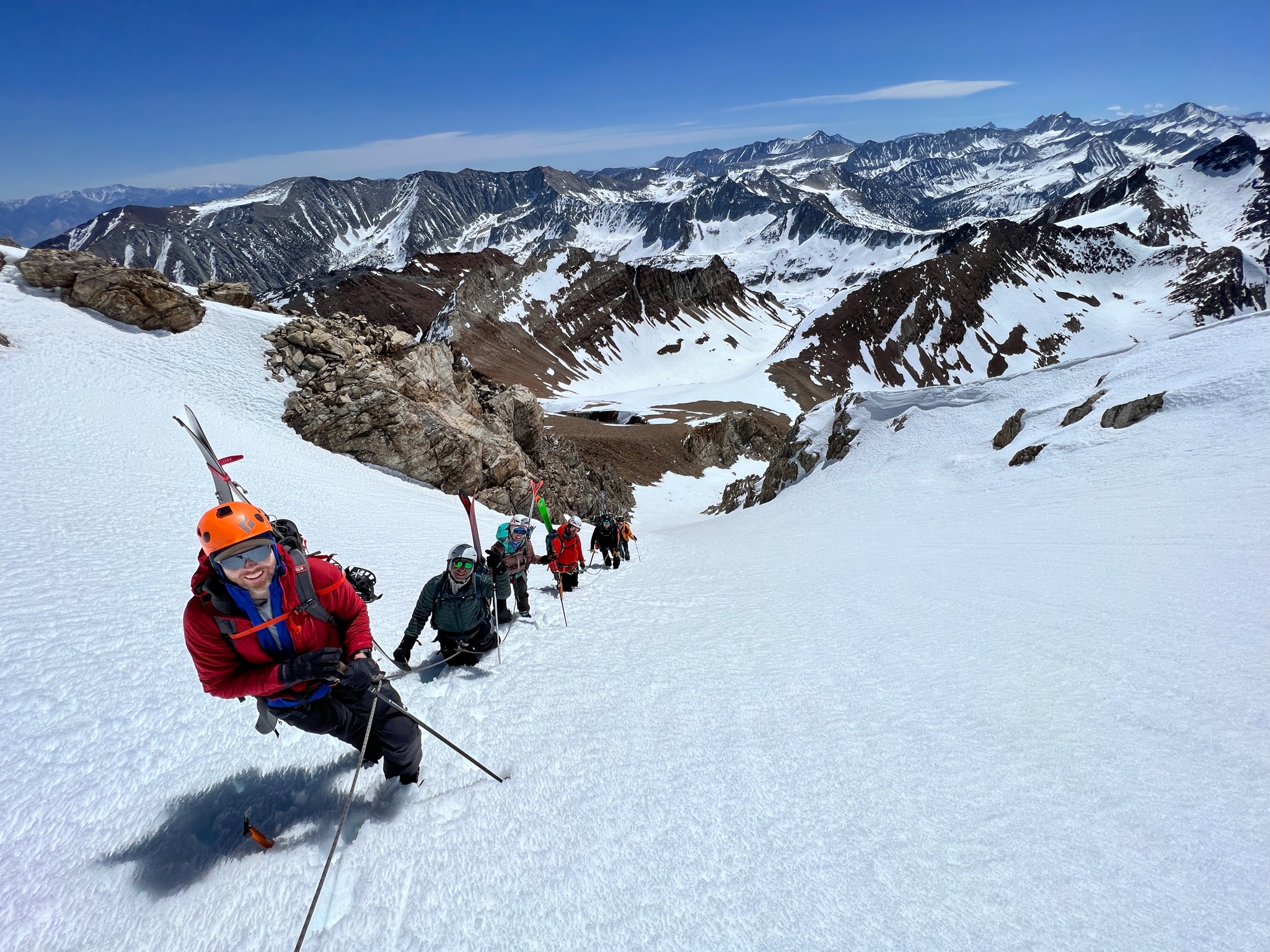 11 Apr April Fools? Ski Touring in the High Sierra is Alive and Well.

If you look at the numbers, skiing in the Sierra Nevada seems like a challenging undertaking. The April 1 snow totals are out, and by all measurements, we are at 35% of average statewide, although local drainages like the Mono basin is closer to 50% and the Kings snow course is at 41%. While these dramatic numbers have given skiers pause, reconsidering high tours, we have yet again managed to find good to great ski conditions, with just a little extra effort.

From April 8-10, we had the pleasure of guiding a group of friends into the upper reaches of McGee Canyon, with the intent on skiing one of the classic ski peaks in the area, Red Slate, but via one of its lesser known descents, the South Face. Recent satellite imagery (we love the Sentinel weekly update available on Caltopo) has been showing a rapidly retreating snow line, so we began the tour in running shoes, and walked on dry trail or firm snow for 3.5 miles before donning our ski boots. From 9,100’, we were able to keep our skis on our feet the entire way to our camp at Big McGee Lake, although crossing back and forth from one side of the creek to the other is getting more and more challenging as high water flow opens up more of the creek and snow bridges become more suspect or collapse.

After a prolonged period of record high temperatures and no overnight freezes aside from minimal surface freezes, all elevations were suffering from a poorly supportable snowpack by midday, especially approaching through low and mid elevations, so early starts are very important for travel. Alpine lakes are beginning to melt out around the edges, with open water increasing not only at the inlets and outlets, so extra caution is needed now when crossing lakes.

The next day, we packed our ski crampons, ice axes and boot crampons for the ascent up Red Slate via McGee Pass. These tools are critical to traveling on firm and fast surfaces in the early morning before the sun has the chance to soften the snow, and we found travel to be easy and quick with the harscheisen (ski crampons) on our skis. Before long we were transitioning to boot crampons below the twin couloirs on the south side of Red Slate, and we booted up the steepening feature, roped up to protect against a fall, and sweated our way up to the 13,123’ summit. The views from the summit are incredible, but we could not enjoy them for long as we were just a bit behind schedule for the optimal descent time given the very strong solar radiation.

Our group split into two and we each chose a couloir to descent, and found a few hundred feet of heavy, isothermal snow where the angle was steepest, but as soon as the angle lessened to the low 30s, the quality of the skiing was really good and we made fun turns all the way down the drainage to our camp back at the lake where we hid from the sun in tents and behind boulders.

The following day, with an incoming winter storm slated to bring extreme winds and new snow, we decided to ski out a day early, to optimize the ski conditions getting back out to the trailhead. So taking a short tour in the morning we were able to climb up below the imposing rocky face of Red and White Mountain towards Hopkins Pass, and enjoyed a pleasant, if a bit firm and chattery, descent back to camp before we packed up and skied out. What was remarkable was how much snow had been lost in the two days since skiing in – far more open water was visible in the creek as bridges collapsed, and we required nearly an extra mile of trail walking to reach the trailhead.

With this storm, surface conditions will surely change, and the new snow will take a bit to transition and get back to the corn cycle we have been enjoying, but will do little to change the vanishing lower elevation snowpack. While ski touring right now might take a bit of extra dedication and more time spent in trail runners, there is certainly still enough snow to go and have a good adventure.