Posted at 12:37h in From the Range of Light & Fast, Trip Reports by Howie Schwartz

Kyle and Kurt Kupiec engaged our services for a journey from the Eastside, through the Ritter Range, to Tuolumne Meadows and we sent them out with one of our best – Jen Reynolds! Here are some excerpts from her report with some photos of the team:

I met with Kyle and Kurt the night before the trip and did a gear check so that they could get packed and ready that night before heading out. I brought the group gear and their bear canisters over so that we could pack them that night. We were able to lighten their loads a bit and educate them on better packing practices.  I was also able to answer any questions or concerns and discuss what they wanted to get out of the trip. We agreed to meet at their place the next morning.

I picked them up at 7 am and we headed up to the shuttle pick up at Main Lodge. We started hiking around 830am. We enjoyed the cool morning as the temperatures were expected to become warm for the high country. Along the way I was able to teach Kurt and Kyle about some of the flora growing on the trail as well as pointing out some of the neighboring peaks nearby. We arrived at our first break spot which overlooks Shadow Lake and we took a moment to snack and drop our packs. An old mine shaft happened to be next to where we walked out to enjoy the vista and we checked it out.

We arrived to the outlet at Thousand Island Lake around 12:30 pm and lunch commenced while enjoying the view of Ritter and Banner. I was able to show Kurt and Kyle some possibilities for our itinerary the next day and we discussed our camping options. It was hot and the mosquitos were out in force. We decided to head over to the backside of the lake for camping options near the inlet after lunch. Once we got to the first inlet on the backside of the lake, Kurt and Kyle were ready to drop their packs and set up camp and get to some long awaited fly fishing. It was about 2:30 pm when we headed for the backside of the lake to dip flies and see what the fishing was all about. It was quite beautiful back there and Kurt and Kyle enjoyed the time spent on the lake. We ended up fishing till almost 5:30 pm when we headed back to camp to have dinner.

That evening we started with brie and crackers while I prepared some miso soup to start with and to rehydrate the guests. The main entree was chicken pad thai with cabbage, bean sprouts, carrots, peanuts and cilantro. Dessert was chocolate chocolate chip cookies. We decided the next day I would take them for a hike either towards North Ritter Pass and beyond, or if they were feeling up for it, up Mt Davis which is class 2.  We stayed up until the light began to fade and the showy alpenglow had died. We crawled into our tents with much anticipation for the next day’s adventure. 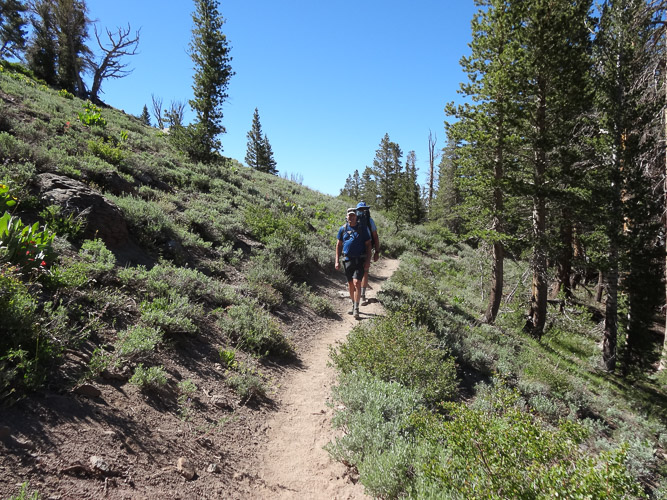 Bright and early we rose with the morning sun just before 6 am. The coffee was put on as we sat and watched the sunrise over the lake. Fish rose that morning as breakfast was served: hot oats, slivered almonds and berries with cream. We got our packs cinched down to accommodate a light load of snacks, lunch, layers and water and we set off towards North Ritter Pass. The views were great across Thousand Island Lake as we climbed gently up alpine meadows with bubbling creeks. Eventually we came upon talus and scree with the occasional snowfield. Kurt and Kyle had never really walked on extended talus so I gave them a impromtu instruction about walking on it. I explained the dangers of talus as well as the risks of walking on snowfields, particularly when snow becomes isothermic. I led them through the talus making sure the path we walked was stable and if I found something loose I pointed it out to them. Thus far they did fine with the balance, although it was a challenge for them walking on uneven ground and at altitude. We had one more rise to go up before we were awarded a view into a very blue Lake Catherine. Ice sheets still donned its surface in places. We took a nice break at the pass enjoying the view and a marmot sunning itself. I explained that there was a better view if we continued along the north side of the lake and down stream a ways. We would be looking at the North Fork of the San Joaquin and beyond to the West. After snacking we continued this path along the edge of the lake and followed the creek past a tarn which brought us to the end of a shelf overlooking the glacial canyon of the N. Fork of the San Joaquin. We couldn’t quite see the Twin Island Lakes but it was tempting to continue on. It was decided this was enough for the day and we headed back to the pass for lunch. Afterwards we made quick work back down to our camp to break down.

The guys didn’t enjoy all the bugs the previous night so the goal was to move camp somewhere over Island Pass with hopefully less bugs.  Tired from the day’s work, we headed over the Pass slowly and made our way to Davis Creek. I was able to find a camp spot perched up high above the creek with a nice view on it. The guys really loved it. There still were some mosquitos however they were not as bad as the night previously. The guys cleaned up while I put water on for soup and got our dinner put together. We had tacos that night which were thoroughly enjoyed along with some chocolate for dessert. We decided that the next day we would get over Donohue Pass in the morning since there were thunderstorms forecasted and make our way down Lyell Canyon to camp.

They guys slept in a bit so we didn’t get moving till after 8:30 am towards the pass. The trail was busy that morning and we ran into several PCT’ers and normal JMT traffic. We got to the top of the pass with minimal stops for water/bathroom breaks at around 11:30 am. We decided to have a snack and get over the pass for lunch. We made our way down the pass to the second lake and found a nice shady spot for lunch. The heat was diffenently on at this point and we knew it was only to become more intense. Before heading on down canyon we got our shirts and hats wet and began dropping down onto the canyon floor. It was beautiful when we arrived in the flats; the meandering river with clear waters, meadows and flowers. And as predicted the signs of thunderstorms were popping up. It was nice to know that we were below where the action would soon ensue. Around 4 pm we decided that we were ready to find “the Hilton” and make camp somewhere along the river. I found a great fishing hole with a waterfall off the trail where I spied a potential campspot just down the way. I had the guys sit tight while I scoped the area and I found the perfect campsite just down the way. We made camp and got our kitchen set up and made sure everyone had water. Thunder brewed up canyon and the occasional breeze picked up but we knew that we were too far away to enjoy any rain. At this point we decided that some flyfishing was on the agenda so we got our set ups out and went down to the river to make some casts. We each caught a few and they were very pretty. I wasn’t sure what they were, a hybrid or possibly a lahontan cutthroat. Either way we were admiring their coloration and markings. Eventually we called it a day and headed back to camp where soup was put on and we put up our feet. I started to get our dinner pulled out for that night which was tortellini, real pesto, pine nuts and kalamata olives with red pepper flakes. Dinner was a winner. Afterwards we ate the remaining cookies and chocolate and sat out till dark telling stories and laughing. It was time for bed. We turned in and decided to try and get an early start because of the heat.

We rose about 6:30 that morning and started with coffee and granola.  Afterwards I gathered everyone’s trash and we packed up our backpacks one last time. We hit the trail around 7:45 am. We soon came upon the junction for Ireland Lake and knew we had about 6-7 miles till we got to Tuolomne. We enjoyed the cool temps of the morning however it became hot quickly as most of the trail was exposed in the sun. Eventually we made it to where the trail was covered by treetop which made things much more comfortable. When we started to see more and more people on the trail we knew we were getting closer to Tuolomne proper.  We arrived in Tuolomne close to noon which called for a stop at the grill for a well deserved hamburger. We sat in the shade eating lunch and enjoying some cold beverages, realizing we were no longer in the woods. After lunch we made our way to the river for some well deserved rest and to stay cool at water’s edge till our shuttle arrived. Our ride took us through the June Lake Loop and I was able to tell Kurt and Kyle about the communities over there as they had never really been. I explained the skiing was great there in the winter backcountry, and on crowded days in Mammoth. We arrived in Mammoth at Juniper Springs Lodge at 6pm and we walked 5 minutes to my house where we picked up my truck and I took them to their home. 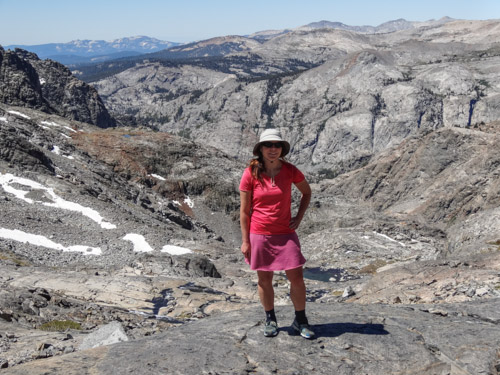 Kurt and Kyle got to go off trail for the first time and go somewhere most people don’t get to go. They really enjoyed this part. It taught them an appreciation between a “trail” mile and a “non-trail” mile. I was also able to educate them on better packing techniques, gear choices along with making steps towards an overall more comfortable and lightweight set up. I was able to show these guests that you don’t have to eat just freeze dried meals in the BC and that you can eat very well without carrying to much and a short cooking time. I was able to give a good education about route finding in varying terrain and teach them about mountain topography/weather. They learned about flora and fauna that live here in the Sierra. I feel that they could see that there are a lot more areas to see and experience after this trip.