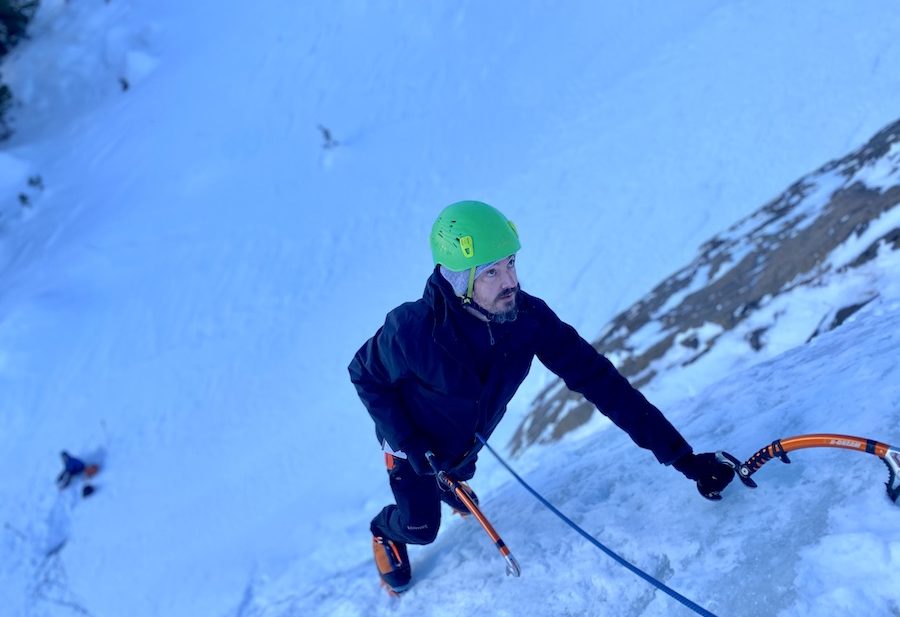 Well, we definitely got JanuBURIED last week and I’m just now making my way back out to our ice venues here in the Eastern Sierra. Avalanche hazards were a big concern the weekend after the storm, but things have started to mellow out a bit. But be aware we still have some lingering “dragons” out in the Eastern Sierra Backcountry! Keep up with the Eastern Sierra Avalanche Center bulletins and make sure you are staying tuned in to the local weather patterns. Local Forecaster, Steve Mace, from ESAC put on a great virtual educational event Feb 3rd covering a lot of really important information including, how to use the website, how to read the bulletins and use that information as well as a recap of our winter season here in the Eastern Sierra. Click here for a link to the recording of the event.

Yesterday I was out at Horsetail Falls with two guests, and somehow with a packed trailhead parking area, we had the entire zone to ourselves on a beautiful day.

Approach: Thanks to Anouk Erni, there is an amazing track on the approach. Thank you Anouk!!! We were able to follow her track and boot up the entire way. Things did soften up in the afternoon on our descent but snowshoes were not necessary. The fixed lines getting up from the base of North Gully to Horsetail Falls proper are mostly excavated, and there are good steps kicked in, that probably won’t last long. From there it was a good boot back over to the falls. The approach over to Tatum Falls would likely require snowshoes.

Horsetail Falls: We spent the entire day out on HTF and had the whole place to ourselves! The hole in the middle of the falls is still quite large, but we climbed ice pitches on both sides and found it very enjoyable. A few note worth observations to mention for this zone were one; since the last storm there is still a significant amount of snow lingering about on these ice climbs which could create some hazardous conditions in the coming weeks if these get frozen over and create huge pockets. Next was the ice on the climbers right hand side of the hole, it’s very sun baked! Be extremely strategic about where you are placing ice protection. The left side of HTF was in a bit better condition as it receives less sun but there is still a lot of snow covering the lower angle sections. There is also a very small bergschrund starting to form at the base of the ice formations on the right side, so be mindful of where you are traveling.

North Gully: Well if we get one more storm this may morph from an ice climb into a ski run. There are two sections on the route that contain a substantial amount of snow, as well as the top. We did not observe any indication that this has been climbed since the storm last week.

Tatum Falls: The falls looks like its in a bit better shape than the last time we reported. Again, I observe zero evidence that anyone has been out sin this one since the storm. Has anyone climbed Tatum Falls this year (before or after the storm)???

Summary: It seems like there is a lot of good ice to be had out here in the Eastern Sierra! Keep up with the avalanche advisories and look out for another Ice Report next weekend. Thanks for reading!