It’s Groundhog Day!!! Punxatawney Phil saw his shadow this morning which means 6 more weeks of winter. We had a couple weeks of it so far this season and we are looking forward to some more of it. Fortunately, the Sierra backcountry season really is best and most reliable in what is technically considered spring, but the spring season is usually just better and longer when we have a big winter too. Though we die every time there is snow in the forecast that doesn’t arrive by morning, we are getting pretty good at dealing with the October climate over here. Kinda like Phil in the movie Groundhog Day…

We can rule out a big winter this season, but if the little marmot has it right (did you know that a groundhog is basically a marmot with the same genus Marmota?) – and it turns out he has a 40% accuracy rate, which is not that bad compared to the fancy climate models – then we have 6 more weeks for winter to kick in. Remember that we could be back to average in a couple major storms so we can’t fully despair yet. The only interesting hint in the more modern computerized forecasting models is an atmospheric river event forecast to hit northern CA (and the rest of the Pac NW) around Feb 5 and last until the 9th. If it digs far enough south it could collide with the Sierra for some of that time. Right now models suggest up to a foot of snow in the 7-day QPF model. Anything white that falls from the sky would be awesome. But let’s not get too excited until it happens.

At this point the mountains are so incredibly dry for February. We did get a couple inches Fri-Sat that were enjoyable for some on and off of the resort, but not enough to even brag about on Instagram or Facebook apparently. On Thursday, I had a surreal experience. Drove up to the Onion Valley Trailhead at 9200′ and hiked a 40+ lb. resupply to one of our guides and friends, Justin Lichter, who is on a winter PCT thru-hike, up to Kearsarge Pass. Yes I hiked up there, with remorse but no regret. Skis would have been much more inefficient, and less fun. On the way up I ran into 3 people unexpectedly, not including my PCT hiker friends. 6 people from 3 groups all in the Kearsarge Pass area in late January is unheard of. Two of the people were friends conducting a monthly snow survey. They only brought 2 core tubes, and they could have done it with just 1, but they were afraid that 1 wouldn’t have enough weight to get the scale to register. The other guy I met was a Frenchman who had taken a bicycle from LAX airport up to Independence, then up to Onion Valley. He pushed his bike with road tires up the Kearsarge Pass trail a few miles then spent the night. His footwear was a pair of black leather sneakers like they make the checkout staff at Vons wear to work. I ran into him as he was starting his descent to bail from his original crazy plan, which was to push his road bike with his gear and supplies strapped on the back over the pass and down into Bubbs Creek to Cedar Grove, then back to LA to fly back on the 10th. All he had was a California road map, and it looks like a pretty good shortcut looking at that. The craziest part is that if his footwear was slightly better and not so soaked, he probably could have reasonably made it. Instead, I advised him that pushing over Highway 120 was probably a better plan, even if the mileage was greater. With my limited French language skills, I didn’t bother trying to explain our wilderness laws regarding bicycles.

If that doesn’t describe conditions in the Sierra backcountry then I don’t know what else to say, so here are some photos. Enjoy and keep up the snow dance for this weekend! 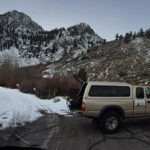 Parking at Onion Valley Trailhead. on 1/29 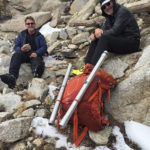 Jay and Kevin on their snow survey. 2 snow tubes were more than adequate. 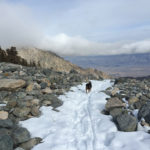 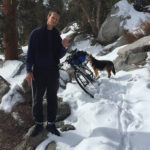 Frenchman enjoys the seasonable recreation opportunities of the High Sierra in late January. 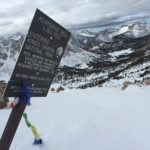 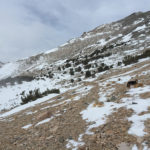 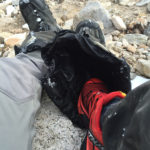 Ideal backcountry footwear for 1/29/15 on the Kearsarge Pass Trail.