Posted at 15:54h in Trip Reports by Howie Schwartz
THE EVOLUTION LOOP

Two hours on day two brought the only stint of bad weather. Driving sleet blinded us from the East as we scrambled over high granite slabs, rounding pristine lakes and crossing primitive streams to the top of Muir Pass. I am wearing my only layers and they are covered in a coat of sticky white crud. Justin and Blake are setting the pace, their sights set on the hut situated on the summit of Muir Pass. We hit the hut in three waves and take the place over. It is cold, but not unbearably so. Jed starts wrapping himself in the mega-mid he is carrying as the sole shelter for three of the hikers. Chris gets up to help him and Blake is shouting suggestions from a bench on the side. They are functioning as a team with a mission now, trying to create a streamlined hiking tarp from a piece of gear many alpine climbers already own. Multi-purposing is one of the keys to going light and fast. But this one is a failure. He looks like a raddish on steroids dressed in a body diaper. Humor is another key to success with minimalist adventures. 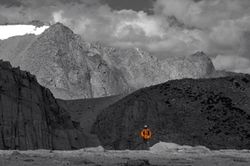 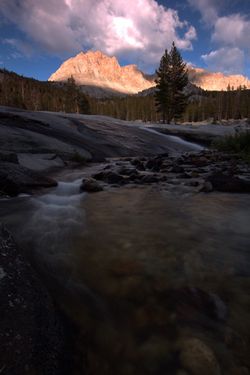 The Evolution Loop tracks from North Lake to South Lake through the Evolution basin up and over three 12,000 foot passes (Piute, Muir, Bishop). It is 55 miles and surprisingly run-able. We had the chance to take an experimental test run of the route with Sierra Mountain Guides a few weeks ago. Along the way, we are testing lightweight gear, learning about hyperlight strategies and tactics from frontrunners in this area of study like Justin (Trauma) Lichter and Howie Schwartz, and we are blessed with a stunning overview of the high Sierra. I am ashamed to say that before this, I had never seen the Sierras more than the highway drive from Reno to wine country. So much climbing, so little time. I am delighted to report that the range blew my mind as expected. The entire range from the Palisades to the peaks over Piute rises from the most solid layer of granite bedrock I have ever seen. This makes the terrain feel flat and continuous, even at elevations of 12,000 plus where 14ers loom overhead. It is strikingly different from the mini-ranges that form the Rockies where the elevation tends to drop sharply between each cirque. 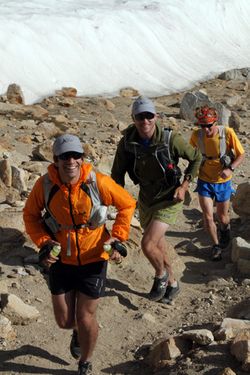 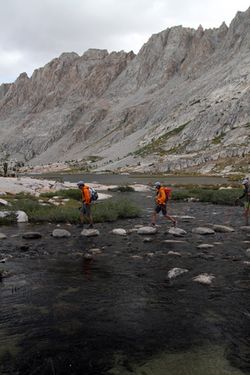 There are also fewer roads. We are on a loop that is part of the longest continual stretch of roadless country in the nation. As such, we are self-supported for most of the trip. This is fine. Our packs average around 15 pounds for days two and three. We are breezing past hikers with huge loads covering the same ground in six days. But even this is not the best way to run this route. This is an exploratory outing and we are minimizing some costs and taking time to put some new gear to the test. We have the luxury of experiencing the mule-supported camp on the first night, then we are on our own. The trip from Sierra Mountain Guides will feature mule-supported camps (with chefs) on both nights. So sick! 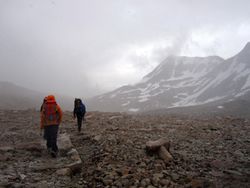 For us, day one was 25 miles of mountain running. We wore shorts and our gear is minimalist with only a water bottle, snacks and lightweight wind gear. The next two days we covered the remaining 30 miles bagging high peaks along the way and stopping frequently for mini product review sessions with the seasoned team. Water was straight from the source with no treatment the entire way and the wilderness left its mark on us with bronzed skin, clean air, and a genuine feeling of detachment from the rest of the world. Content and happy, we wonder if it should ever end. But like any trip, this one has a beginning and an end. We are happy they are both (along with everything in between) beautiful, and rugged, and entrancing … the way our wilderness was meant to be.
Sierra Mountain Guides
Special thanks to the photographers:
1. Blake Herrington
2. Matt Irons
3. Matt Irons
4. Dave McCoy
5. Dave McCoy
6. Howie Schwartz
7. Blake Herrington