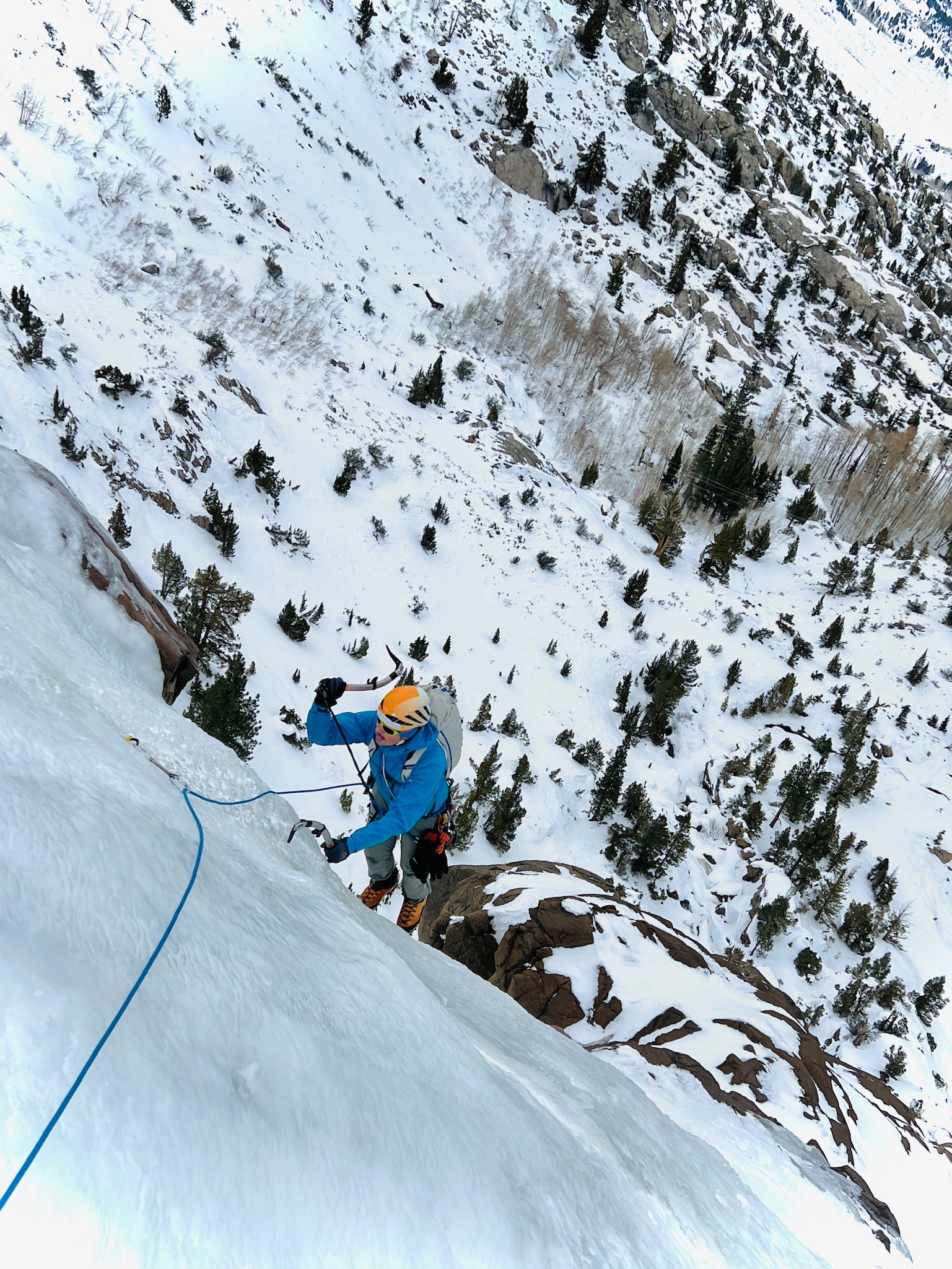 Winter has finally decided to settle in here in the Eastern Sierra, and the ice seems to be forming up quite nicely at the moment. This past Tuesday I had the chance to check out June Lake and Lee Vining Canyon with my friend and local guide, Jessica Olson, to get an idea of how everything was shaping up.

Jessica and I decided to go scope out North Gully first. We took flotation for the approach and were glad to have it. The snow surface has been faceting in this area and was not very supportable for just our boots alone. With the recent snowfall at the beginning of the month we were skeptical of how much “ice” we would find in the North Gully but when we made it to the base we decided to give it a shot. Even with the current amount of snow on the route I found it to still be a worthy adventure. We climbed 3 pitches of mostly ice and had a blast.

Pitch 1 has the most snow currently, and is very thin at the top of the first ice section. Pitch 2 is mostly ice with a funky hole to manage leaving the belay. Pitch 3 again was mostly ice to the top. We found the ice to be in great shape and took 13-17 cm screws. No stubby’s were needed. The Pitch 2 anchor took medium sized cams. From the top of the route we used a naked thread to descend to the top bolted anchor on the climbers right side of Horsetail Falls. From that anchor we used our 60m rope and a tagline to descend to the ground. As we descended HTF the ice looked to be in stellar shape. We could hear the water flowing under the ice but there was no exposed water at this point. The base was also clear of debris but this may change as we see temperatures rising over the next several days before the next storm cycle hits. On our way down from HTF the fixed rope was still in place and looked to be in great shape.

After our June Lake mission Jessica and I cruised up to Lee Vining Canyon to see how things were looking up there. The road is plowed all the way to the power station and is mostly dry until the last ¼ mile. No 4WD was necessary. The snow on the approach was supportable with just our mountain boots, no flotation was needed.

Chouinards Wall is looking pretty nice this time of year compared to 2021. We took one lap up the center flow and found the ice to be in “hero” condition. Tree Route still needs some time to shape up, but the far left corner known on Mountain Project as “Comrades Corner” has ice from top to bottom. It’s looking a little boney at the moment but if we keep our fingers crossed we might see this one shape up nicely this season.

We did not climb on the Main Wall but things looked to be in good shape on the center flow. Caveman looks like it saw some action but my guess is it’s too thin for screws down low. Spiral Staircase looks like it might make another showing this season and there are some rumors that it has already seen an ascent this season.

Alrighty, that’s all we got for you at the moment. Remember that it’s still early season for the ice out here and conditions can change rapidly and even hourly in some locations depending on sun exposure, etc. We should also take note that in a winter mountain environment, everything is just harder. Make sure you pack extra layers, extra food, hot water and be prepared to self rescue in the event of an emergency and keep your belay positions clear from ice fall! Search and Rescue can take hours before they are able to reach you. Keep your decision making conservative and know your limits. Ice is nice, but tools are sharp!