It has been a wild week for the early season ice in California.  Very cold days with brittle ice and arctic winds, some fresh new moisture in the form of rain, and warm cascade temps have given our ice the full spectrum of conditions this week.  Overall there is fun ice to be climbed in all of the standard venues. The ice continues to be thin in places, and during the warmer spells not well bonded and with water running behind the ice.  That said the fatter flows are taking screws well and with the long nights once we get some cold nights the ice should fatten up quickly.

Yesterday Rich Kohler and I enjoyed a fine day adventuring in Lee Vining.  The ice was nice on several different routes that we climbed.  The Poole Powerplant road was mostly snow free and possible to drive in with a low clearance vehicle.  The approach was the most memorable part of the day and in short was “rowdy”.  It is the time of year where new snow that is unconsolidated can make the hike in and out from the ice the most grueling and hazardous part of the day. We only got about 2-3 inches of new snow but it was enough to cover the gaps in the talus and make some sections of the approach miserable.

It rained the whole way in on the approach and I credit the fact that we even made it to the base of the climbs to the fact that both of us have lived in Western Washington in the past and have gotten accustomed to rainy approaches that can lead to fun adventures.  The approach to the narrows was pretty decent but once past the narrows there were sections of undignified wallowing in deep snow to get us there.  It was the kind approach where 1/2 the time snowshoes would have been ideal and the other 1/2 you would have to take them off.  We just dreamed of that 4 foot storm that will fill out this gully where a nice boot pack will lead to the ice.

On lookers right of the approach there was new ice forming that was not there a week ago…this ice is fun to climb but should be attempted only really early in the morning on a super cold snap.  Sun hits the upper ice causing quite a lot of spontaneous morning ice fall creating high objective hazards for these climbs. 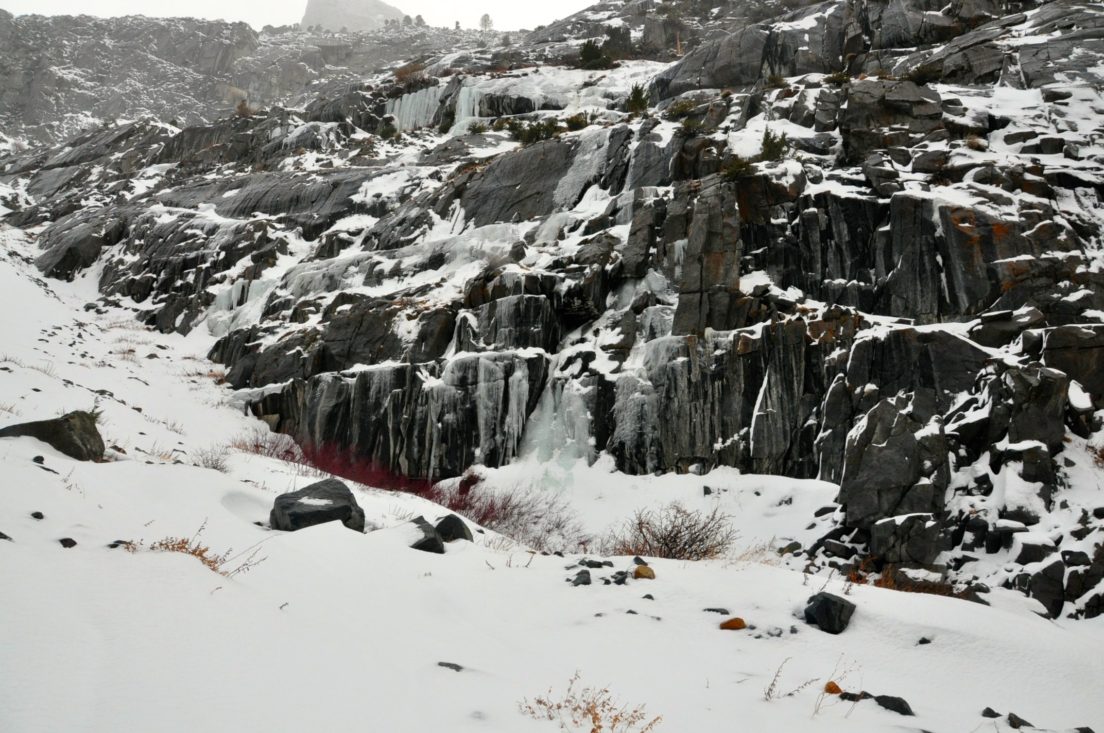 We chose to avoid the main wall due to how warm it was and the higher chance that the steeper less well formed ice may have a higher chance of falling.  The main wall is still thin at the bottom but the left side (spiral staircase) looks like it will be in great shape once it cools off in the next few days. As has been the new norm….the Bard-Harrington wall is dry and no ice has formed except for a few hanging daggers. 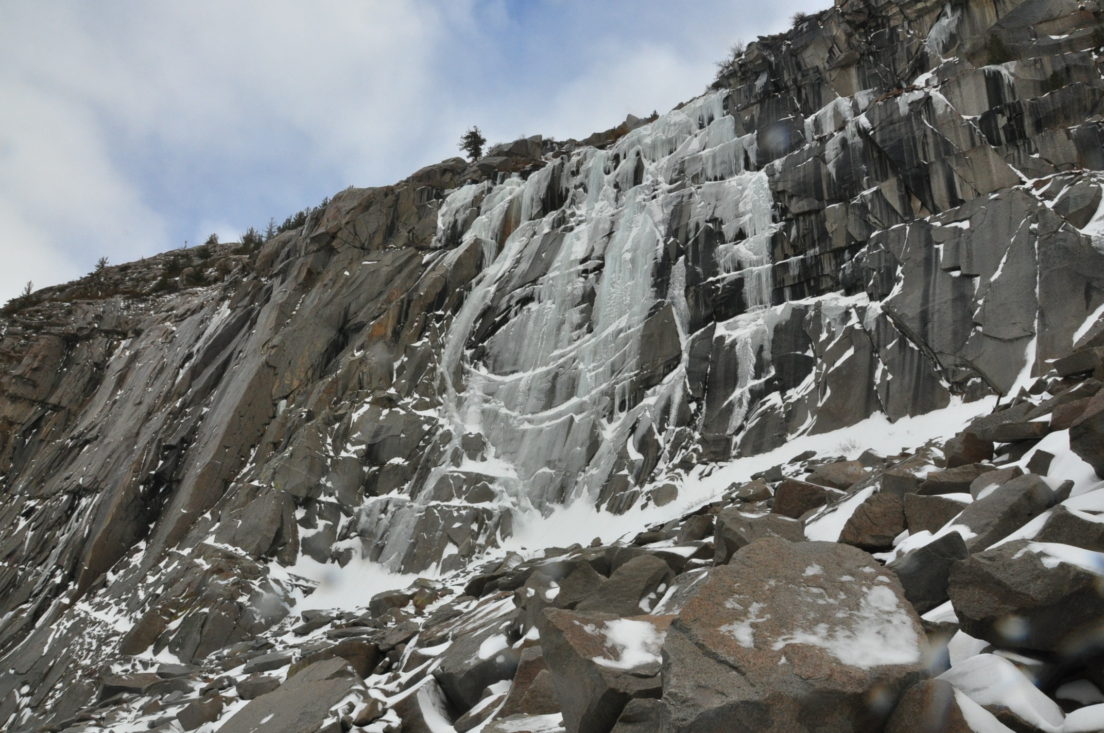 Main wall still thin but climbable with spiral looking fatter than in years past. lower part of main line is still too thin for screws

Chouinard Falls has fat ice on the left and center and a nice thin line has formed in the right corner as well.  there are probably 5 distinct lines to lead that would take screws up to 13 cm in length, however Thursdays conditions had a layer of slush on top of nice plastic ice. 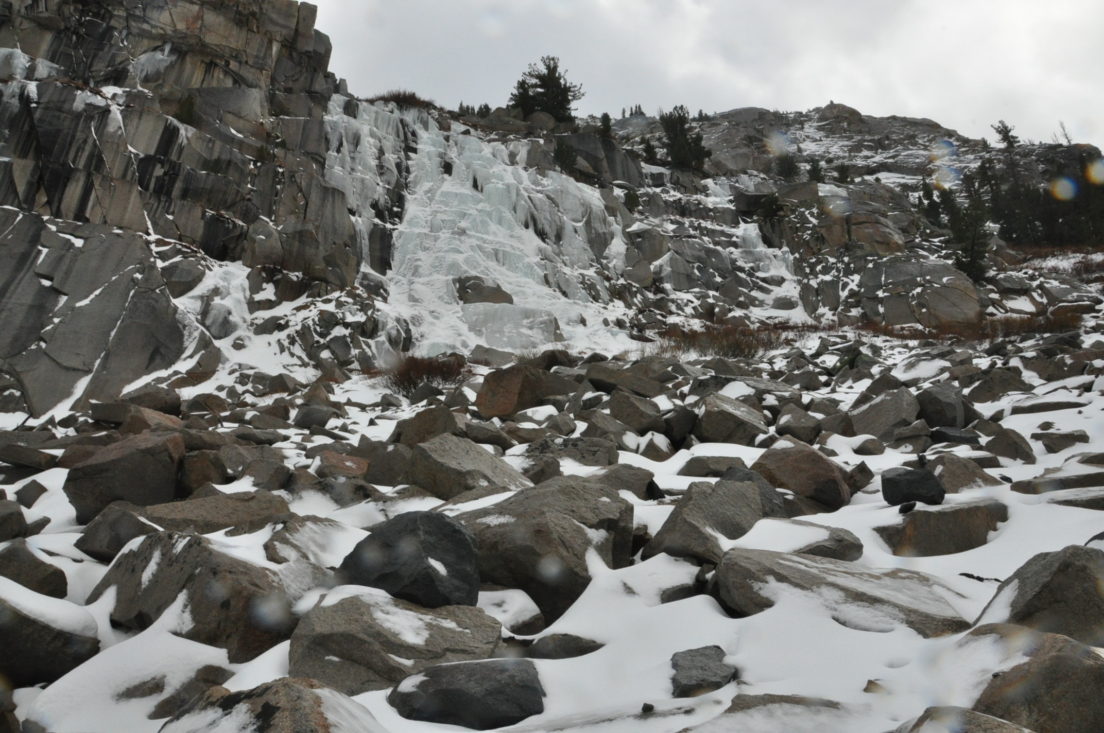 4 of the 5  bolted anchors (left and center routes) are well exposed and free from ice but the 4th from the left set of bolts were buried under a 6 inch thick layer of ice. I spent about 15 minutes hacking the ice from around these bolts and chains and hope that more people will continue this early in the season.  Last year we exposed them in the early season and they stayed free of ice throughout the season…see photo for location of bolts/chain anchors. 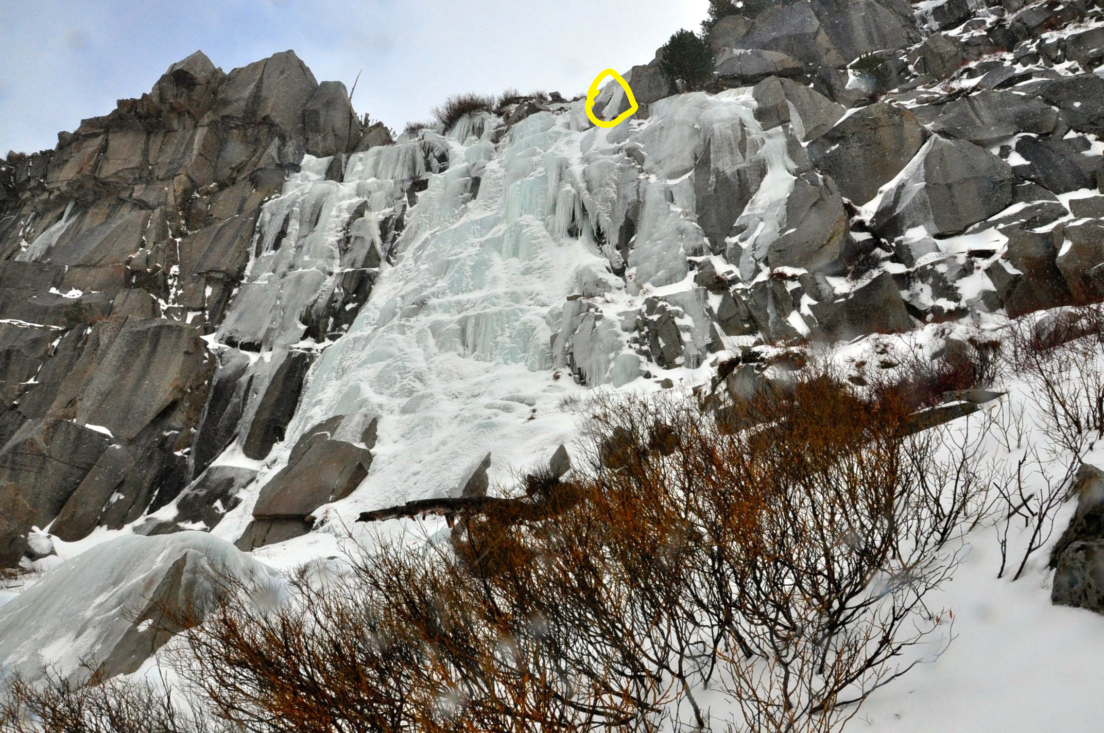 Anchors that were iced in that we cleared

Overall it was a fun day and we were glad the rain turned to snow and cleared throughout the day but overall it would have been nice for a colder day for ice formation.  Meltwater puddles, and running water are not ideal but as long as it gets cold we will take any moisture that we can get.

Thanks to Chris T. We have some photos from December 4 from Coldstream Canyon….It looks like ice is forming up well and some lines that can be lead and toproped but still some early season conditions. 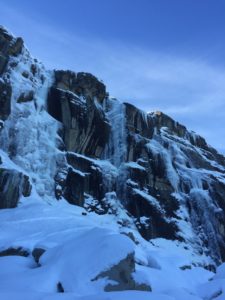 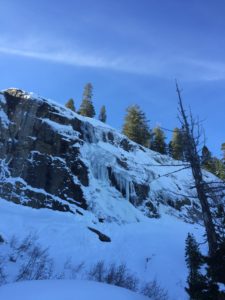 Looking good and in great shape for those willing to make the trek…. 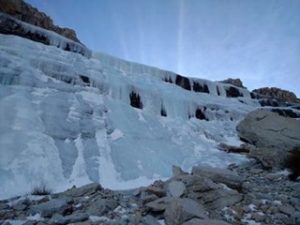 Our Friend and local guide Ryan H. climbed at Lundy Canyon on 12/4 and posted this report on www.mountainconditions.com.  It is reposted here with his permission….

Climbed the Three Wise Men route in Lundy Canyon today.
Was able to drive (high clearance 4WD) to the trailhead, and followed the summer trail. We brought snowshoes, put in a good track, though the track will likely be filled in again by tomorrow with moderate to high winds.
Route has mostly good ice with some hollow sections and thin ice over running water. Most of the truly funky stuff was avoidable by staying along the right margin and then crossing over the open water at the beginning of the 3rd pitch.
The descent is a bit icy right now, and crampons would be useful for at least the first traverse along the summer trail.

I know several parties who have had fun sessions climbing ice at the roadside ice this week, and reports that the right side of horsetail are looking good.  with the warm temps I am still avoiding this area until there is more coverage and freezing of the running water.  Ditto for Tatum….we need cold cold temps for this ice to get solid and less wet.

Hoping to keep these coming all season and get some videos and ice tech tips plugged in so feel free to comment and share.