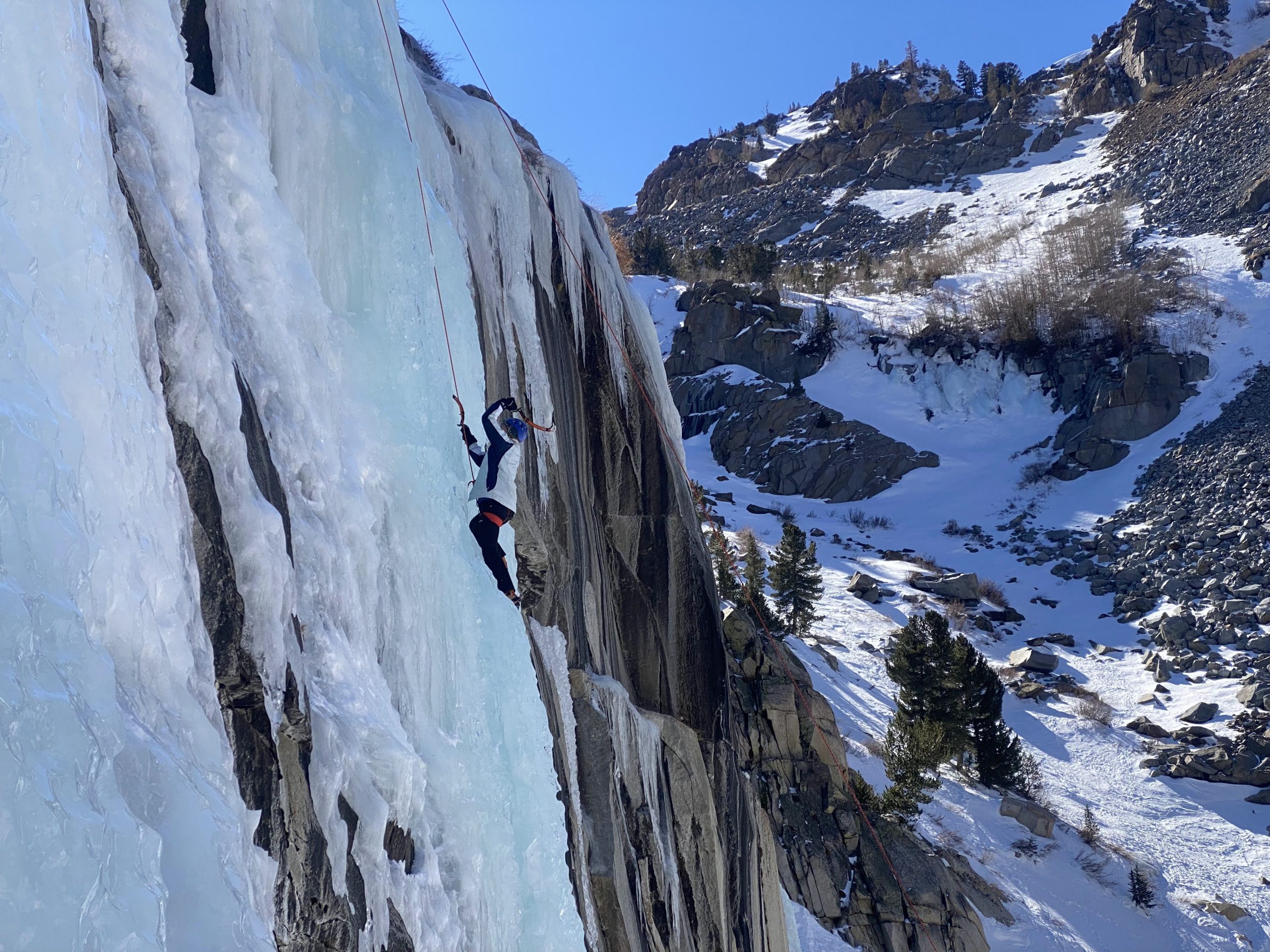 Well the 2021/2022 ice season is a wrap for Sierra Mountain Guides and I’m happy to say that it was another successful one! This season we provided 72 different guests ice climbing instruction on a total of 51 different trips. A huge shout out to everyone that joined us this season and to all the guides that provided these amazing experiences! Job well done!

To finish off my ice season I was just out for the last few days in Lee Vining Canyon (Friday-Sunday) and enjoyed some really nice ice. Chouinards Wall still has more ice than I’ve seen in a long time and is climbing really well. Comrad’s Corner has finally made an appearance this year, coming in late but better than never. The center flows are fat with pick placements getting filled in overnight and almost climbing fresh every day. The anchors in between Comrad’s and the Center Flow are still accessible as of Sunday, March 20th in the ice cave. Tree Route has been taking a beating this year but is hanging on well. Moe on the far right side is still offering up some fun short ice and was a really great option this season for the budding leader or the new ice climber looking to test the waters in this crazy sport. All in all Chouinards Wall is climbing fantastic right now but it won’t last long. The sun is starting to hit the cliff in the afternoon and with temperatures moving into the high 40’s and low 50’s next week things will start to deteriorate quickly.

The Main Wall has been looking grimmer and grimmer each week. The ice down low is not growing at all anymore and is feeling the effects of the warmer temps. I climbed the first pitch of Caveman today and had to venture quite high before finding any reliable protection. There is still a lot of ice on the upper section of p1 but it’s now taking on a deteriorating picked out character, making it quite technical to climb. The Plumb Line still has a lot of ice but lower sections are looking thinner and thinner with the Main Line looking the thinnest of all.

For anyone wondering, the “Adventure Flows” have been falling down for a while now. I witnessed very large (refrigerator size) sections come down this past Friday landing close to the base of the initial pitch. We’ve also been watching rock fall occasionally for the last several weeks too.

To summarize the conditions, I’d say that there is still a ton of ice up in Lee Vining and for the enthusiastic ice climber good fun can still be had if they’re paying attention to the weather and getting early starts. My guess is that Chouinards Wall will likely have ice on it until the middle of April. If anyone makes it out there in the next few weeks let us know what you find!

Final Thoughts: There is one last thing I’d like to comment on- We had a great year out on the ice but two weekends ago we got really lucky. One of our guides was injured last week at the base of Chouinards Wall. A neighboring party called “ICE!”. We looked up but one of our guides was right in the line of fire. Luckily his injuries were relatively minor considering what happened and he’s home recovering. Accidents happen and to some extent it is part of the game we play while venturing out into the mountains. As guides all we do is assess and evaluate risk but it’s impossible to eliminate it, unless perhaps you choose to not leave the trail head. But for those that do, all you can do is try to stack the deck in your favor. I keep replaying the incident in my head wondering how we got there. It’s easy to look back on a situation that has gone poorly and say “yeah we made the wrong call because look what happened.” But what actions were taken and what decisions were made that led us to where we ended up? The easy answer is: we should have been positioned further away. I would have much rather the ice not hit my friend in the face and the day to have gone on as we planned. Today I witnessed two more close calls from neighboring parties shelling ice down on top of each other. One climber was able to duck out of the way but was still hit in the shoulder and dropped to his knees but was luckily able to maintain the belay. The other climber took a piece of ice to the helmet which seemed to have dazed him but he was also able to maintain the belay. Overall nothing really “bad” happened, no one was missivly injured, but they were only inches away from a much different outcome. One of the most astonishing things I find about these incidents is that the climbers continued to operate in the same fashion, making no changes to avoid future ice fall. Getting hit with large/catastrophic ice fall should not be part of ice climbing. But when belayers find themselves at the base with ice fall coming close it’s always an option to have the climbers stop, and move the belay position further away. I have certainly learned a valuable lesson this season and I think everyone that was involved with this incident did too. I’m just glad my friend is going to be ok.

Thanks to everyone that has tuned in to the ice reports this year. I’m happy they have been helpful to some of you! It’s been a great season on the ice but now I’m looking forward to getting my rock shoes out and soaking up some sun down here in Bishop! See you all next season!