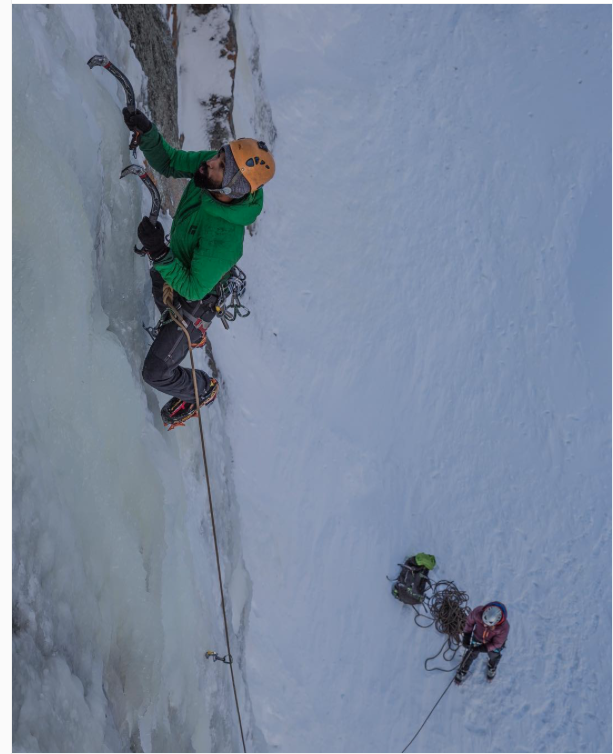 Welcome to our first report since our big early January snow dumps. It has been a wild past week since our last report.  Mammoth pass hit 20 Inches of water that fell from the sky in all forms.  Heavy wet snow,  flood causing rain, and light fluffy powder.  Luckily the eastern sierra has the elevation to have more of the latter than other parts of the west coast.

The good news is that the 5 days of high pressure in combination with the high traffic of a busy MLK weekend has brushed the snow off from the ice and beat in one of the most mellow approaches to the canyon that we have seen in the past several years.  It is safe to say that with the high elevation rains and now the freezing single digit nights we have some amazing conditions for ice climbing that have not been seen for a really long time.

This past Saturday was the first big break in a series of storm days and several good folks went in with snowshoes to beat in a solid track into the ice.  SMG had an ice 101 group but it sounds like there were many other folks wanting to climb ice in the canyon.  Part of the congestion in Lee Vining could be contributed to the fact that much of the lower angle ice is still buried by snow in the moderate angled ice venues such as Horsetail Falls and June Lake Roadside Ice.

I have been out of town for the past 2 weeks teaching a course in Tahoe…hence the delayed “weekly ice report” but was able to get out yesterday to find the approach as good as I have ever seen it and the ice as fat as it has been in years.

Things in the narrows that are normally thin desperate testpeices that are rarely climbed are now fat and taking screws and almost even getting picked out…but by no means like some of the other more popular ice venues in the country.

The fact that this year has seen several FDA’s (first documented ascents)….of routes that may have been climbed in the past given the popularity of ice climbing and the caliber of climbers that have wondered by these spots.  That said many local Ice climbers have no recollection of seeing these Narrows climbs having formed so fat.

Many of these routes have names that follow the trend that was established by local climber and route developer Luke Lydiard.  He established some mixed lines in the narrows named after Star Wars Characters such as Jenga Fett, Boba Fett, and Wicket…..The new routes this season have been documented (from left to right starting just right of Zippos Frozen Booger and just left of Wicket) as:

“R2D2” (Viren and Julie Perumal 12/2017) Due to bluish ice in the corner and because that is the coolest droid ever.

Luke Lydiard also established a mixed ice and rock route called Jawa which is to the right of Zippos.

These newly documented routes can be found on Mountain Project at this Link:

These climbs have had many ascents this season…they have all been climbed without the use of fixed anchors and are clean climbs (with the exception of wicket). many require some rock gear for top anchors and a scramble off or a rappel from a small tree. As of 1/16/2017 there is a small cord and a locking Carabiner that has been left on the rapell tree as the old anchor is buried under snow. The anchor for zippos takes gear from .5 Camalot to #1 Camalot and good constrictions for stoppers and small hexes. Many of these will change throughout the season and were first led with thin pro but currently take good screws.

Overall besides the approach being phenomenal there are loads of good lines to be climbed and the conditions are great.

Yesterday I was able to leave the parking lot at around 11:30 – have a 20 minute casual approach and climb 3 pitches in the narrows and 3 pitches on the main wall and back at the car before dark.  Zippos, Womp Rat, and R2D2 were all fat and taking screws the whole way up and we climbed Caveman and Plumb Line which were also in great shape.  Bolt anchors are free and clear of snow.  sections of the main wall are very wet but it is easy to avoid.  There is wall to wall ice so it is easy to find a line that has not been climbed if your not interested in drafting on old pick holes.

Spiral has a lot of snow on the lower parts and the cave entrance is getting much smaller.

Bard – Harrington – has more ice and snow than I have seen in the past 5 years.  It looks claimable for those who want to get rowdy but the conditions look like things are lining up to have fatter ice on the Bard….lets keep our fingers crossed.

June Lake – Friends of ours climbed today at June Lake Road Side Ice (1/17) Right now the lower angle ice has plenty of snow still covering it though there are streaks of water ice sticking through.  Now is the time to get on the steeper ice that is really accessible in Lee Vining.  I am not considering June Lake as a viable option for guiding in the next week.

We have some storms and precipitation on the way in the next week. The models still disagree with the Precipitation amounts as well as the freezing elevations but the good news is that the approaches will get better and we will have more moisture.  More of the lower angle ice will still continue to get buried but the steeper routes that are lead only will continue to grow.

#1 –  Our friend Doc Clark walked around the top of main wall to drop a fixed line to take some photos and reported that there was a slide with a bed surface and it was super sketchy to down climb to the anchors. Recognize that even though it may take a little longer – it is often safer to lead ice at lee vining than risk a sketchy down climb to try and find anchors.

#2 – We saw another guided group climbing on the north side of the canyon and doing some instruction on some really awesome teaching ice.  This ice is really fun to climb and is a great venue early in the morning after a really cold night.  Just be aware that just because you see tracks going over to the base does not mean that it is a great idea to climb in that area.  Many folks who have spent a lot of time in the canyon have witnessed very large ice fall events once the sun hits the slopes above that are full of hang fire for point releases and ice fall.  Please exercise caution and if you choose to climb here … start early and move quickly and get out of there before the sun hits the upper slopes. (see photo below) 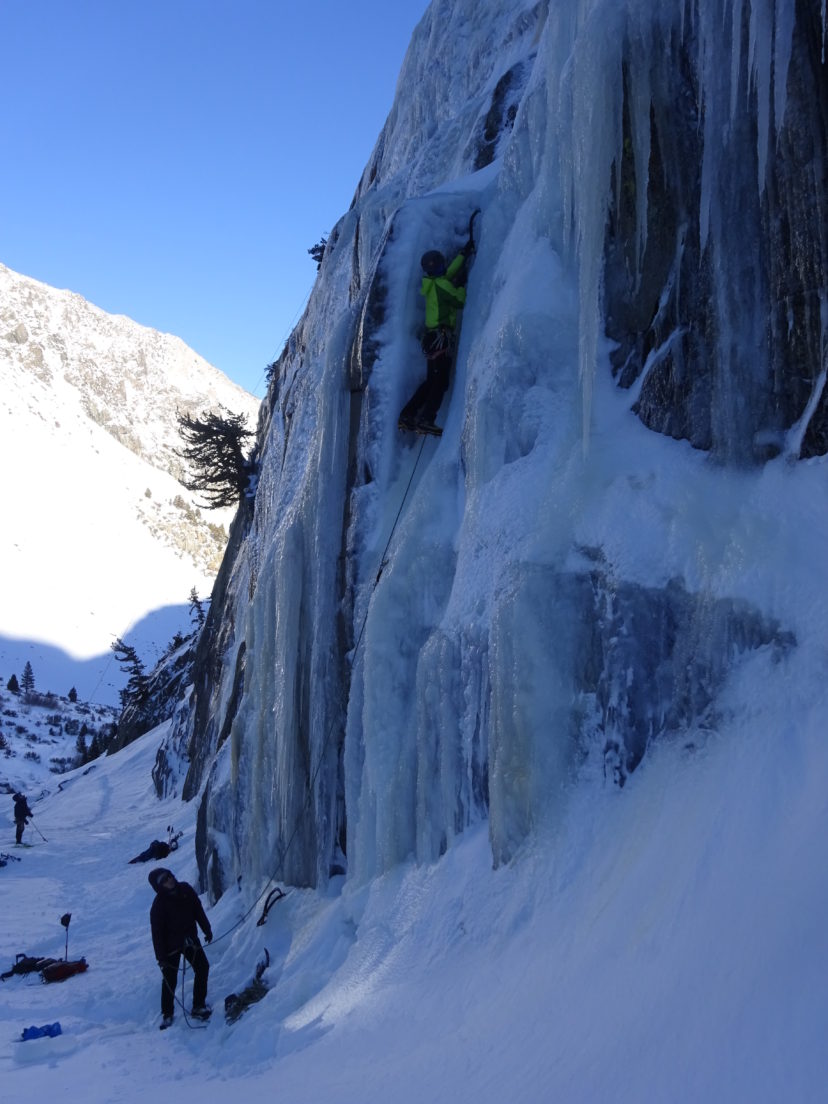 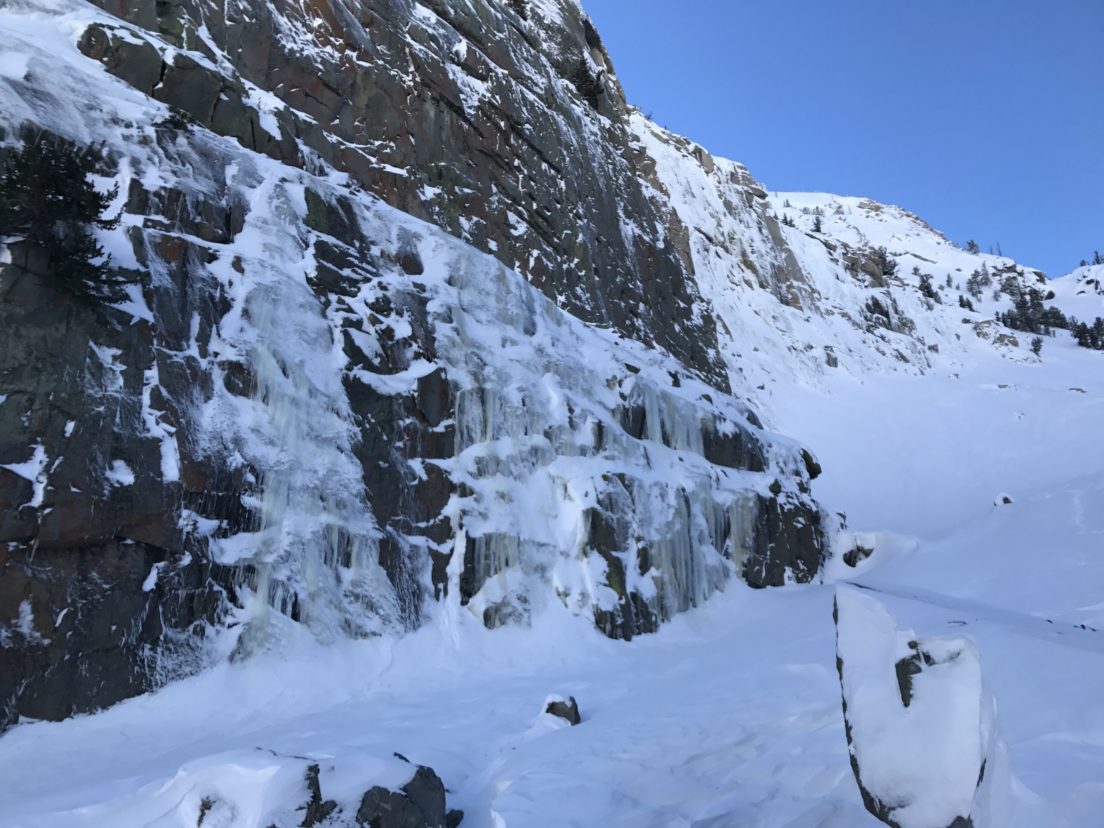 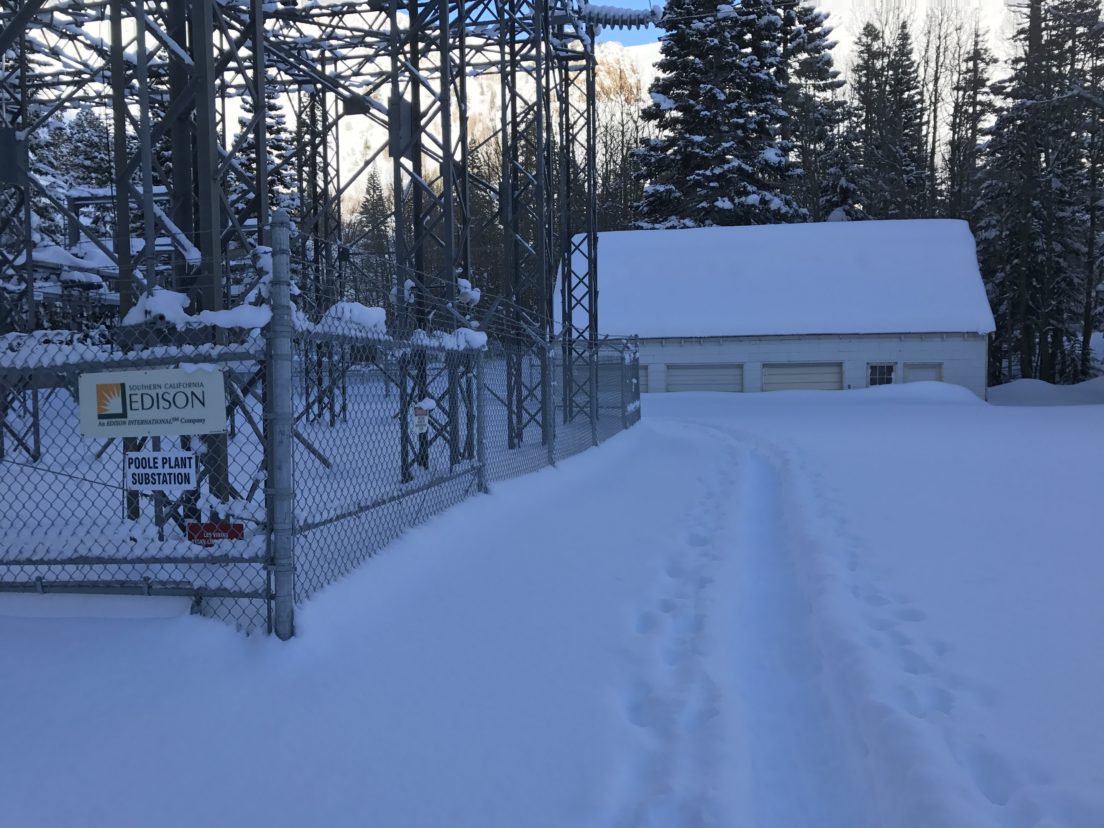 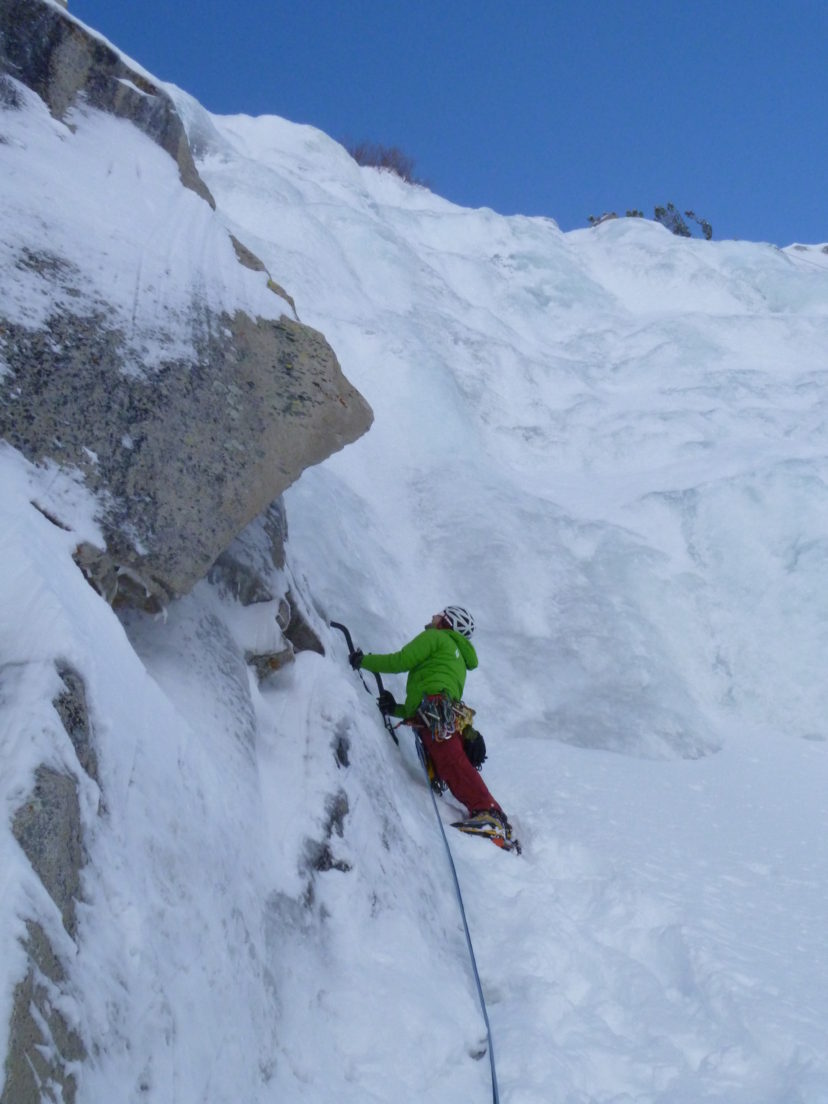 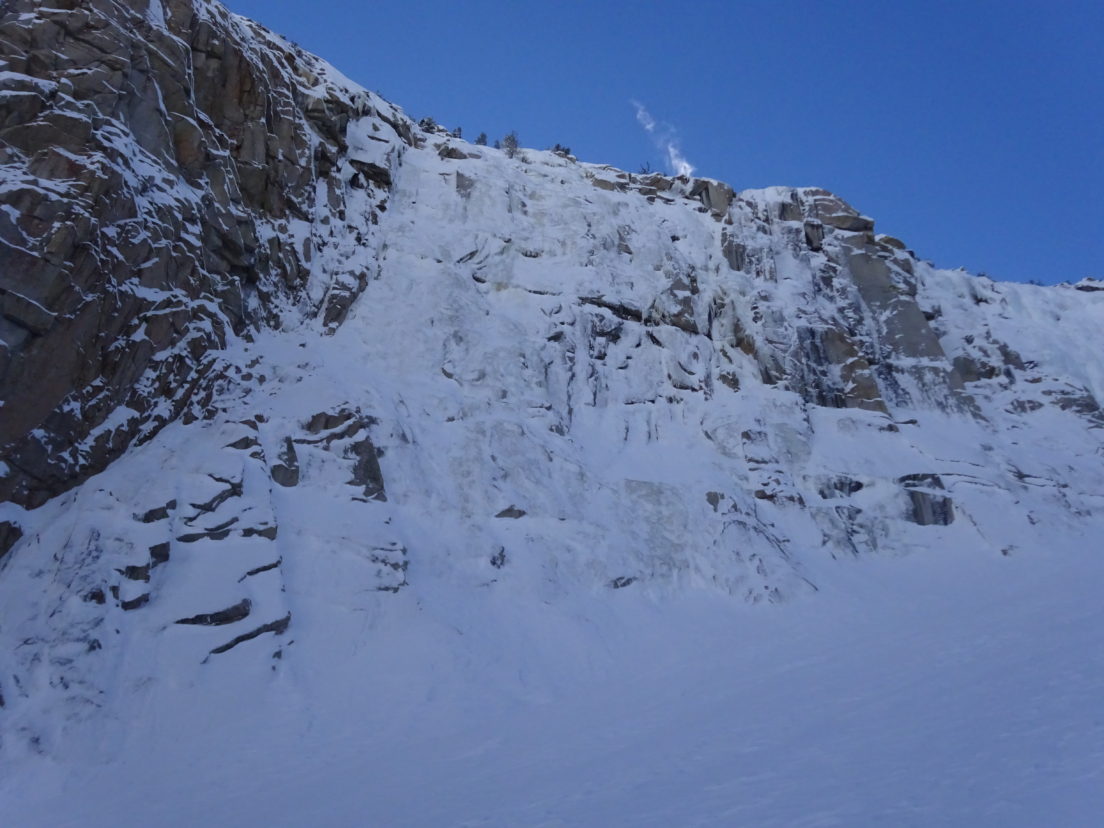 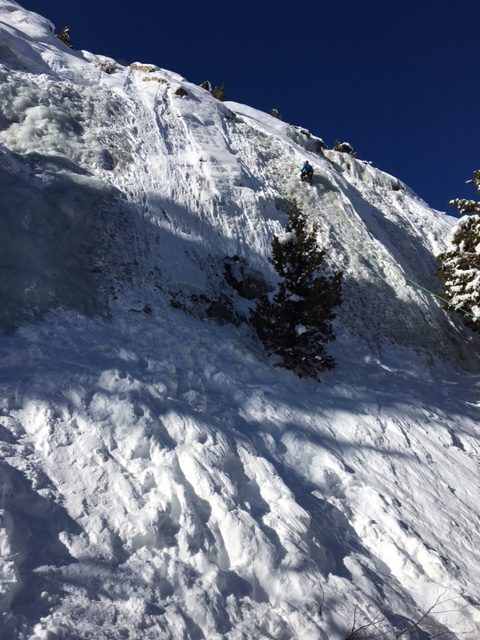