Greetings Ice Climbers….What an exciting week of weather for California Ice climbers and backcountry mountain users.  The conditions are constantly changing during one of the wettest winter months that we have had in a long time.  Since our last report we have had nice well forming ice on new years day with lots of folks out climbing at Horsetail, Roadside, and Lee Vining Canyon.  I spent my New years Day climbing pitches on the Main wall which has been fattening up and hosting a really cool cave belay with a steep and exciting 2nd pitch start as you exit the belay cave.  Since New Years Day we have received several days of snow dumping on the sierra crest with the area 7 day QPF’s (Quantitative Precipitation Forecasts) having amounts as high of 30 inches of water.  Mammoth Mountain had a base of over 80 inches at 9000′ which is good news for approaches into the high sierra later this season.

There are some significant problems that face the ice climber though during these storm cycles!!!

Please be careful out there and stay conservative with your decision making.  This week in the Tahoe Area there was a Skier buried in an avalanche, and there are several naturaly occurring avalanches. Today the Sierra Avalanche Center issued a forecast of Extreme Avalanche Hazard – Due to significant loading from rain and heavy wet snow, natural and human triggered avalanches are certain in the next 24 hours. Avoid travel in or near avalanche terrain or in runout zones. The avalanche danger is EXTREME!

This is not an avalanche resource – As ice climbers before you go out please check the most updated avalanche forecast and discussion on the local area avalanche centers.

Historically Skiers traveling in similar terrain will have avalanche training and carry avalanche gear before leaving the car but in the same terrain climbers enter avalanche terrain without giving 2nd thought to the hazard.  It is becoming more common for ice climbers to carry Beacon/Shovels/ and Probes on approaches in many climbing venues, and there are plenty of examples of accidents involving ice climbers due to Avalanches.

If you have not taken any avalanche training or are a little rusty consider taking an SMG AAIRE Avalanche course this season…. 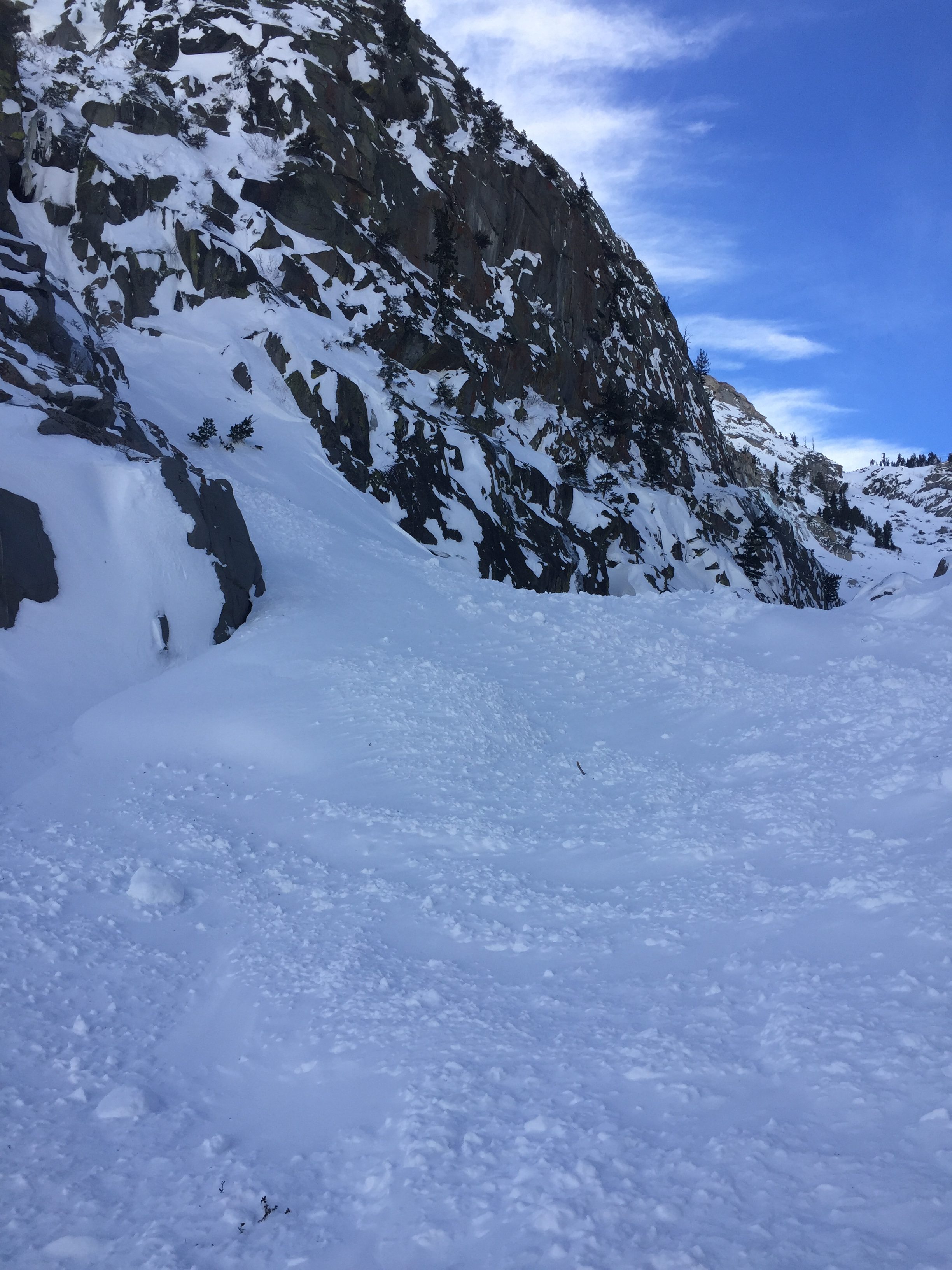 On January 6 SMG guides Lindsey Fixamer and Geoff Unger Lead a group of Guests into Lee Vining Canyon for a day of custom private ice climbing.  We were closely watching the weather as well as the avalanche bulletin and the wind graphs that showed significant wind transport that could have loaded slopes on the approach.  We discussed a known avalanche slide path that crosses the approach path between the creek crossing and the narrows.  The guides chose to have each individual carry avalanche equipment. and managed the terrain and had backup options as well.

Info from a trip to Lee Vining last Friday ….”Avalanche debris was present in the narrows.  Avalanches that ran in the 1/4-5 storm estimated a size D2 to D 2.5 in LVC.  Evidence of these was readily apparent Friday, but no movement of snow was observed.  We did have some whumphing on the approach, which would indicate some underlying instability lurking in the snowpack.” – SMG Guide Geoff Unger (IFMGA Guide) 1/6/2017 trip

The June Lake Loop road is now gated and closed to traffic just past the SEC power plant.  Please remember to park off the roadway and make life easy for the Cal Trans plows.  Carry a shovel and a tow strap because there is a good chance you may be plowed in on one of the upcoming storm days. 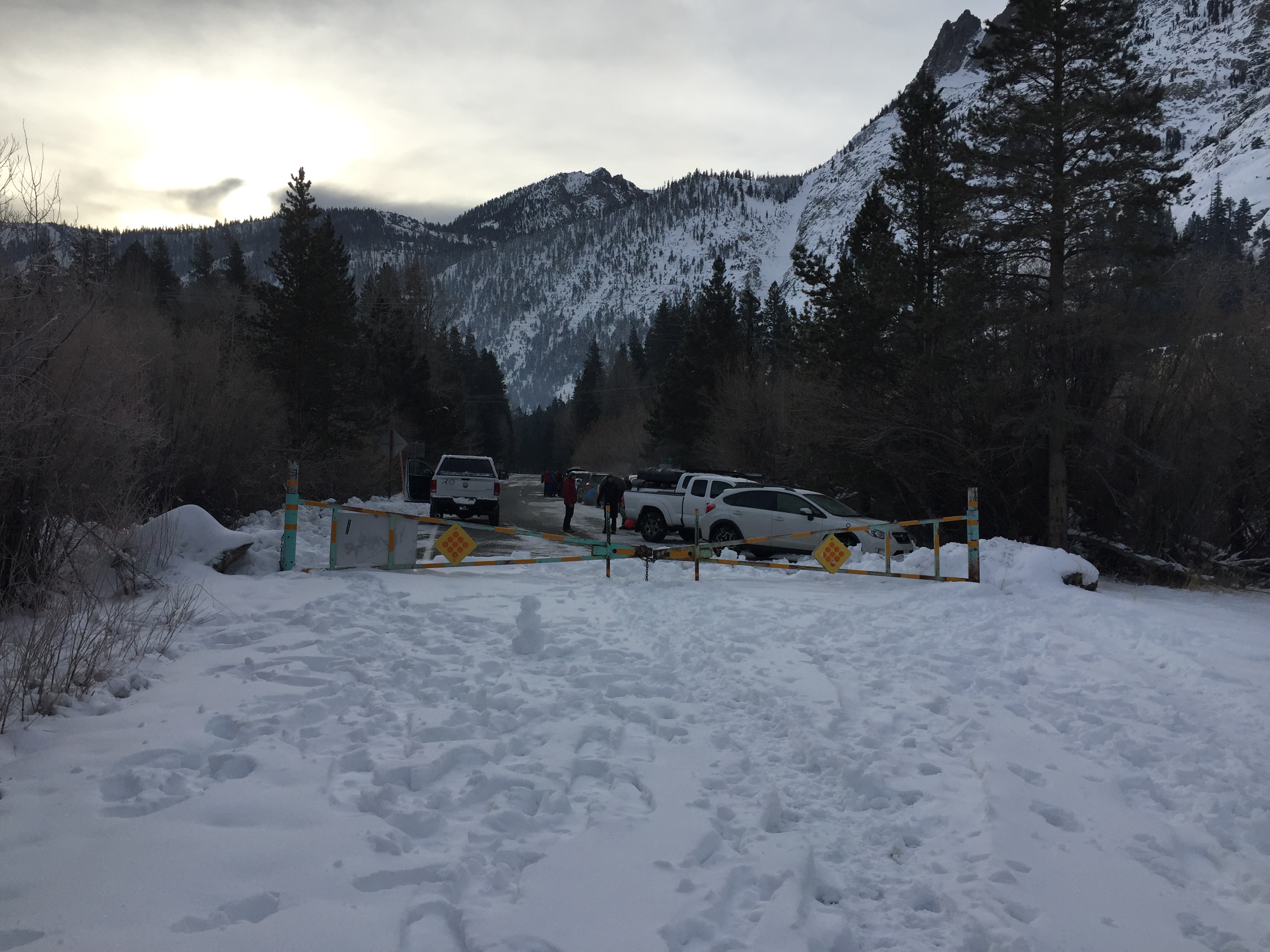 Please remember Roadside Ice is on SEC private Property and so is the approach for Horsetail.  Minimize your impact by having a small group size, Carpooling, and being respectful.  Access could be closed if this site is used inappropriately.

LVC 1/6/2017
We had the Canyon to ourselves, which was no surprise given the 2 hour snowshoe approach to reach the narrows!  Avalanche debris was present in the narrows.  Avalanches that ran in the 1/4-5 storm estimated a size D2 to D 2.5 in LVC.  Evidence of these was readily apparent Friday, but no movement of snow was observed.  We did have some whumphing on the approach, which would indicate some underlying instability lurking in the snowpack.

The ice conditions were just fine.  It was almost as if no one had been there this season.  The magic of a multi-day Sierra storm!  Ice was fat on Choinards and Main Wall.  Even the Bard-Harrington zone was looking ‘climbable’ if you want to put on your sendy pants.  The narrows ice was definitely looking a bit worse for the wear, although the south facing flows on climbers right after the narrows were looking really good and saw some action.

Have a care for the avalanche danger in there as things are always changing with new snow/rain and wind. 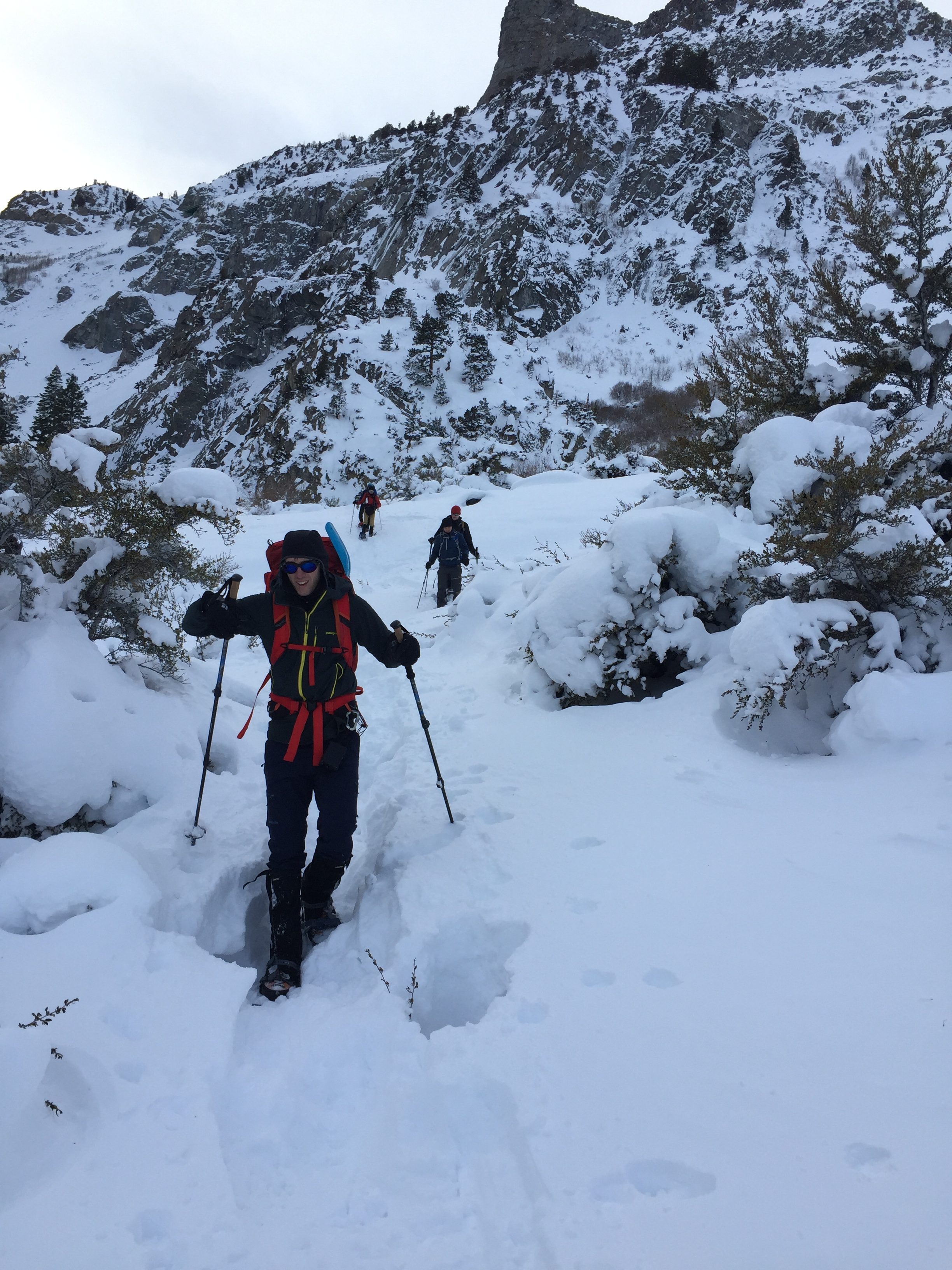 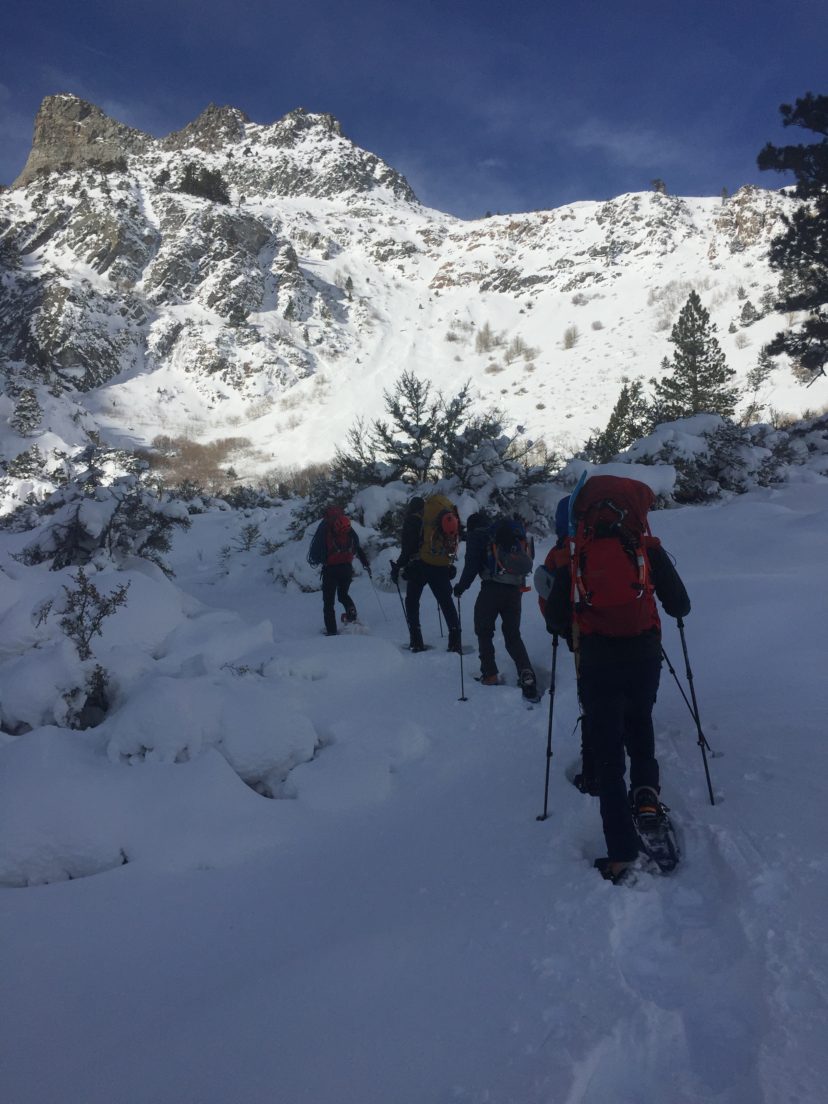 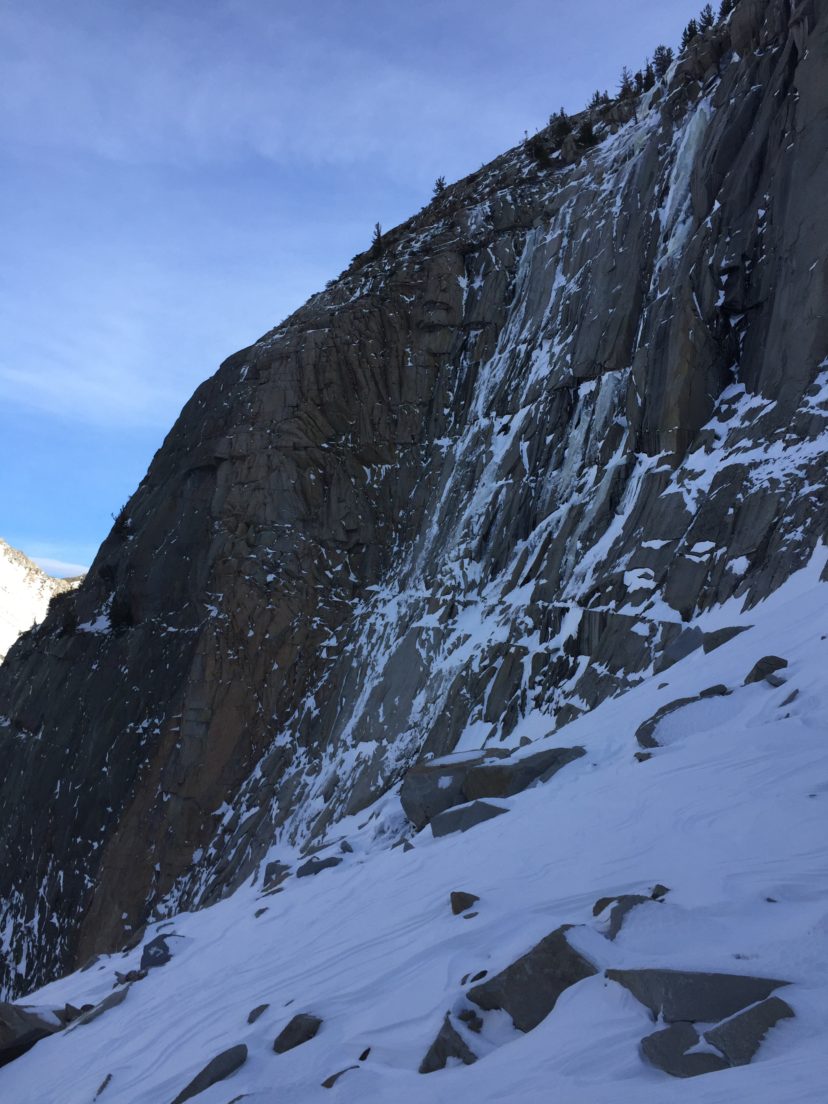 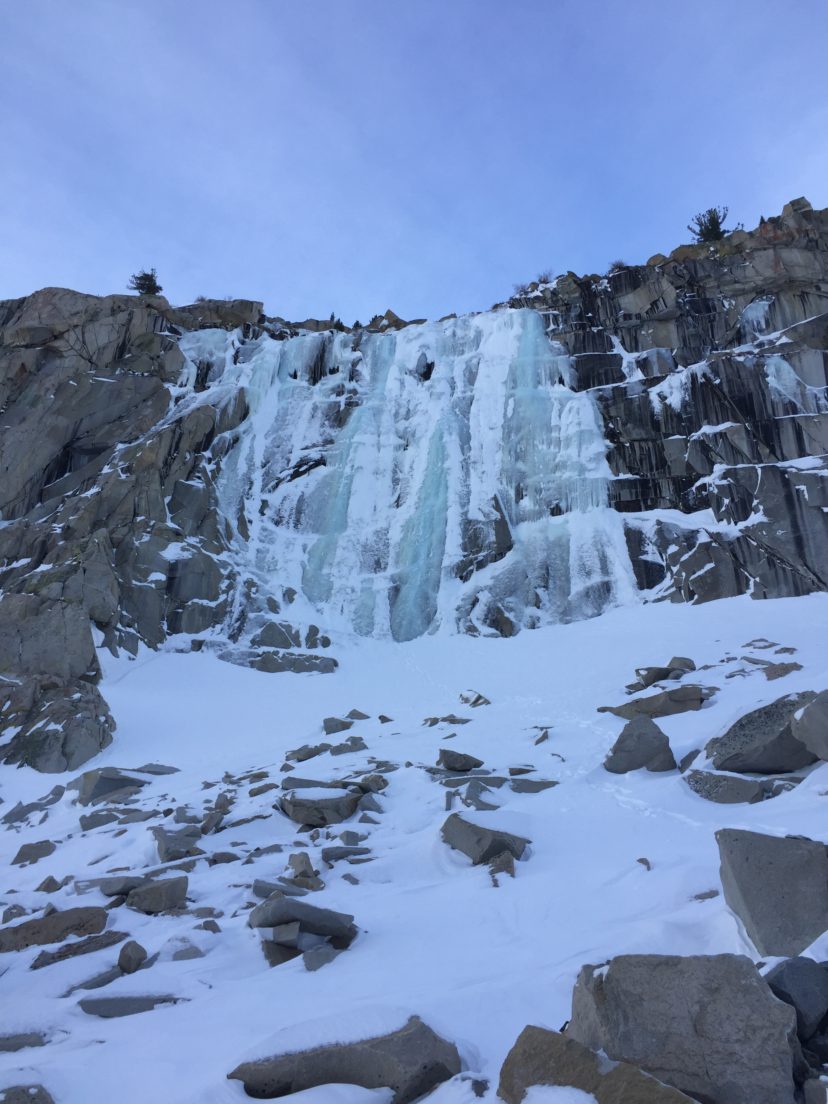 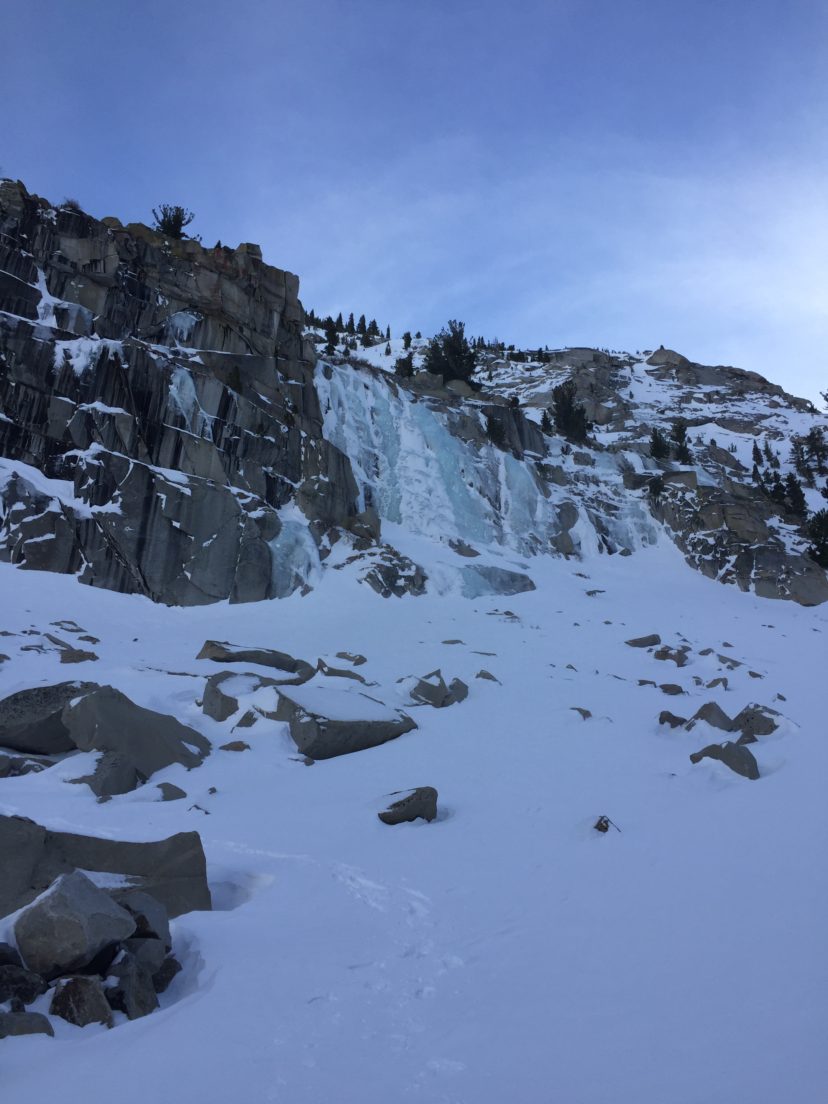 More Rain – then snow – then cold  – then more storms – ….”many of the ingredients for amazing ice formation” – stay tuned for future weekly conditions reports and please help support this report with trip reports, photos and video