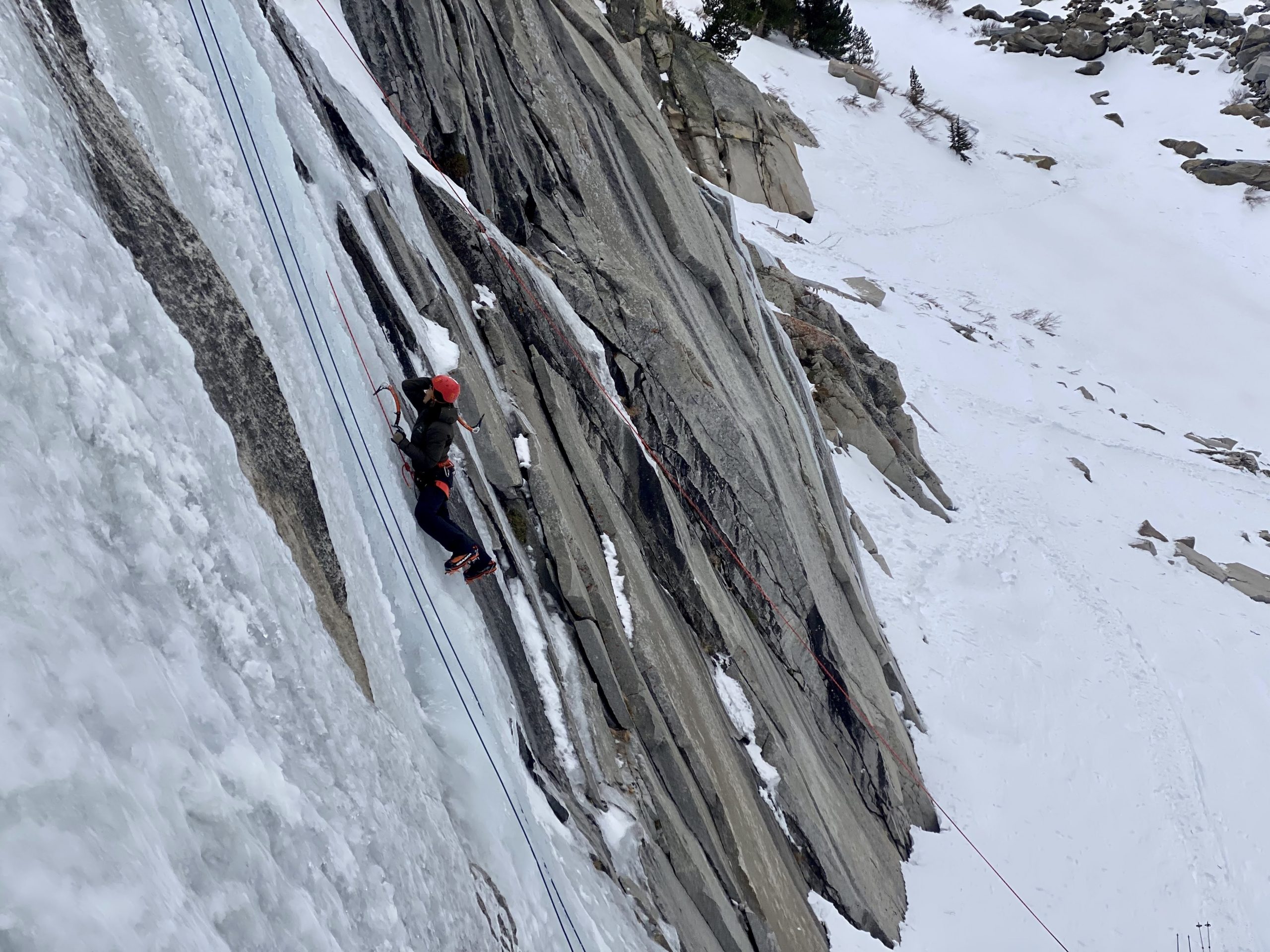 Posted at 22:16h in Conditions Reports, Eastern Sierra Ice Report, From the Range of Light & Fast by Michael O'Connor

Just had another really good weekend of ice climbing in Lee Vining Canyon with four stoked new ice climbers. This might have been the busiest weekend that I’ve ever seen out in LVC in the past several years”. The parking lot was completely full and had cars overflowing down Pool Power Plant Rd and I  counted 30 people just at Chouinards on Sunday with probably at least 6 more on the Main Wall! Busy, Busy, BUSY! But It all seemed to go off without a hitch.

Not much has changed conditions wise in LVC. Chouinards Wall is still climbing pretty much the same as last weekend with the center of the cliff getting the main source of water and filling out nicely. Tree Route and Comrads still have ice on them but it’s been bone dry for the last couple weeks and starting to deteriorate. The far right side still has a nice flow growing. Still hoping the flows change up a little bit in this area and spread out some more ice for us. But we’ll see if that actually happens.

The Main Wall was getting a lot of action this weekend with people leading the main line and some groups top roping on the first pitches of Caveman and the left side of Main Line. We even observed a party climbing up Spiral Staircase which might have been the fist of the season.

There are a few other little flows on the opposite side of the canyon just uphill from The Narrows that have some neat looking little flows going on them now with some evidence of people climbing on them. On a nice cold overcast day these could be fun little missions. We also observed one party venture all the way to the top of the canyon to climb a small flow of ice as well which looked to be maybe 15-20 feet of ice. Worth it if you want to climb by yourself on a busy weekend!

One thing to note about this weekend was how full the parking got so quickly with not many cars in there. If everyone parks head in on each side as opposed to parallel, we can fit quite a few cars in there. The last thing we want to do is block each other in and cause issues for the power plant. So if you show up and you’re the first car, park in this orientation and we’ll be able to fit plenty of cars.

Fellow SMG Guide and IFMGA Mountain Guide Bernd Zeugswetter was out in June Lake today (Jan 17th) with one guest and climbed the North Gully at Horsetail Falls and reported back that they encountered very pleasant conditions with some good ice! They descended on Horsetail Falls and also reported good ice there as well. It’s encouraging to hear about such nice conditions in June Lake right now especially with the warm temperatures we have had over the last several days.

With a busy holiday weekend I shouldn’t have been surprised by the crowds but I think what was more surprising is that we didn’t see more people getting hit by ice. I cannot stress enough that climbing ice is absolutely NOT like climbing rock. Climbers WILL knock ice down the wall and it will be big enough to injure or kill a person positioned in the wrong place. I saw about 50-60 percent of the groups out climbing this weekend positioning themselves directly under their climbers while belaying and there is just no reason to do this. Please do yourself, your partners and all the other folks at the crag a favor so we don’t find ourselves in an unpleasant situation with someone getting injured or worse from ice fall and position the belay stances out of the way from ice fall. At Chouinards wall specifically there are a few spots that offer good shelter or distance from ice fall, the far left corner where the rescue sled is hanging is one good option but is really only enough room for 5-6 people. The big rock in the middle of the base of the base of the cliff can be a good stance for a belayer but I’ve also seen big ice fall in this spot. So for a belayer watching the climbing happen and being able to move out of the way it can work but it’s not the ideal location to set up a basecamp and be hanging out with your back to the wall unable to see what’s happening.