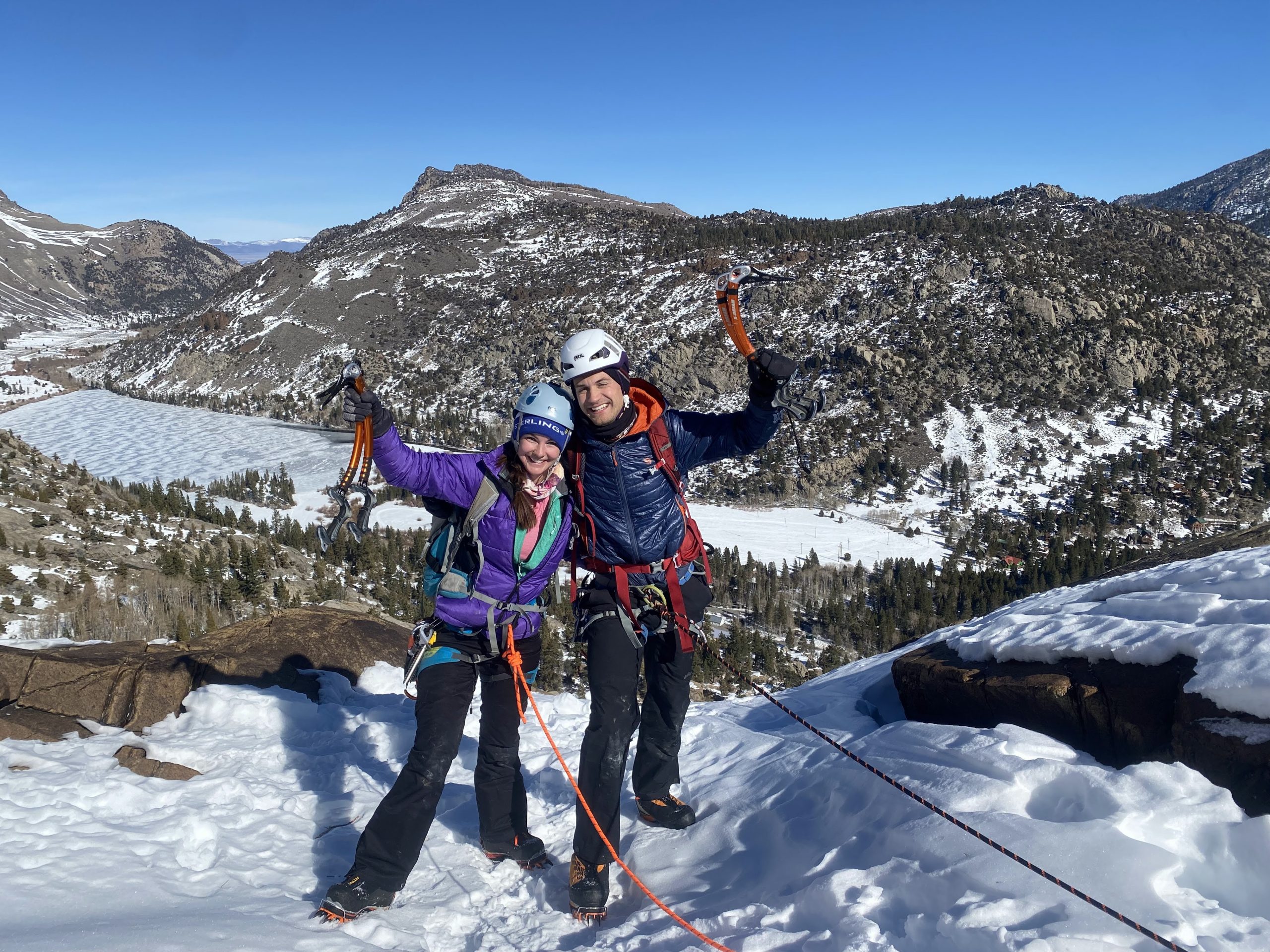 Posted at 14:24h in Conditions Reports, Eastern Sierra Ice Report, From the Range of Light & Fast by Michael O'Connor

“Getting into the Swing of Things”

While we have been having some unseasonably warm weather lately here in the Eastern Sierra, without a single drop of precipitation in the month of January, the ice seems to be coming into its own. While the overall conditions are certainly still on the low tide compared to seasons past, the ice is actually climbing really well and it feels like we are finally getting into the swing of things!

I spent Saturday out in Lee Vining at the good ol’ Chouinards Wall with two really fun guests (Jacob and Bridget). I was really surprised to see how much things have filled in and fattened up where the flows are running. Some sections are still flowing with some pretty wet ice but we were finding really awesome “plastic” conditions just next to these sections. Comrad’s Corner is almost a full dry tool route, and the Tree Route is not far behind it. The flow on the far right side has grown quite a bit and is looking really nice right now too. One of the chain anchors is now covered by ice and would take a hell of a lot of digging to make it usable. Even if you did excavate it, it would likely be covered back up by the next day. This is the anchor up and to the climbers left of the bolts for Tree Route.

The Main Wall is looking really nice right now with three main flows that all seem to be climbing really well. Folks were climbing all over these flows on Saturday top to bottom. Spiral Staircase filled out a bit more in the middle as well, but the start certainly will involve some rock scratching.

What was even more surprising was how fun the flows across the canyon looked! I referred to them as the “Adventure Flows” in the last report (does anyone know if these actually have a name?) and these things have fattened up quite a bit as well with some nice blue ice. Anyone looking for a fun early morning adventure would have a blast on these with several hundred feet of ice separated by a few rock/snow ledges. Walking off to the climbers left looks pretty mellow and there seemed to be some evidence of a track from someone who had climbed it fairly recently. The upper sections were starting to hit the sun by 11am with the entire flow from top to bottom in full sun by 2:30pm. By 3:15pm it was back in full shade.

Sunday I was out in June Lake with the same folks and we had a really nice time on the North Gully to start the day. While it may look a bit rotten and funky from the ground there are some really fun sections with more “plastic” ice conditions and some really wild, completely translucent ice, where you can see the falls rushing under. Pitch 1 has a short section of WI 2 ice with an easy snow ramp at the top that leads to the huge block anchor. Pitch 2 wrapping around has some really nice ice on the climbers left side (WI2+/WI3-), and the right (WI2) is a bit lower angle with some snow filled in to the sides leading up to a nice alcove on the climbers left side providing a nice belay stance just before the final head wall of ice. Pitch 3 might be the spookiest of them all right now. Each swing and kick towards the top will get your heart pumping when you hear and feel the vibrations of the huge shell of ice that has formed over the top of the falls that is somehow supporting your entire body! Topping out will likely leave you with a nice face full of sunshine and a beautiful view of the June Lake area to finish things off. We spent the rest of the day running a few laps on the far left side of Horsetail Falls and found yet again some amazing plastic ice conditions. Overall the June Lake area might have the best ice in the Eastern Sierra right now! And if you look hard enough, you might be able to find some rarely formed ice with no one else around!

The ice in the Eastern Sierra is climbing really well right now where it’s flowing and I think that February could be even better! With a cold snap on the way to start the month off we might be finding some really fat conditions and maybe even some flows that have not formed in a while or even some that haven’t formed “ever”? It’s really nice to see some many folks getting after it this season and I’ve really been enjoying the good vibes at the ice crags this year. Folks seem to be climbing responsibly and being considerate of their fellow climbers sharing the ice. See you all out there next week!