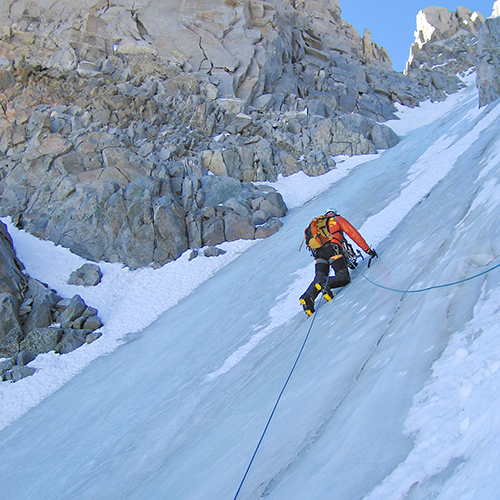 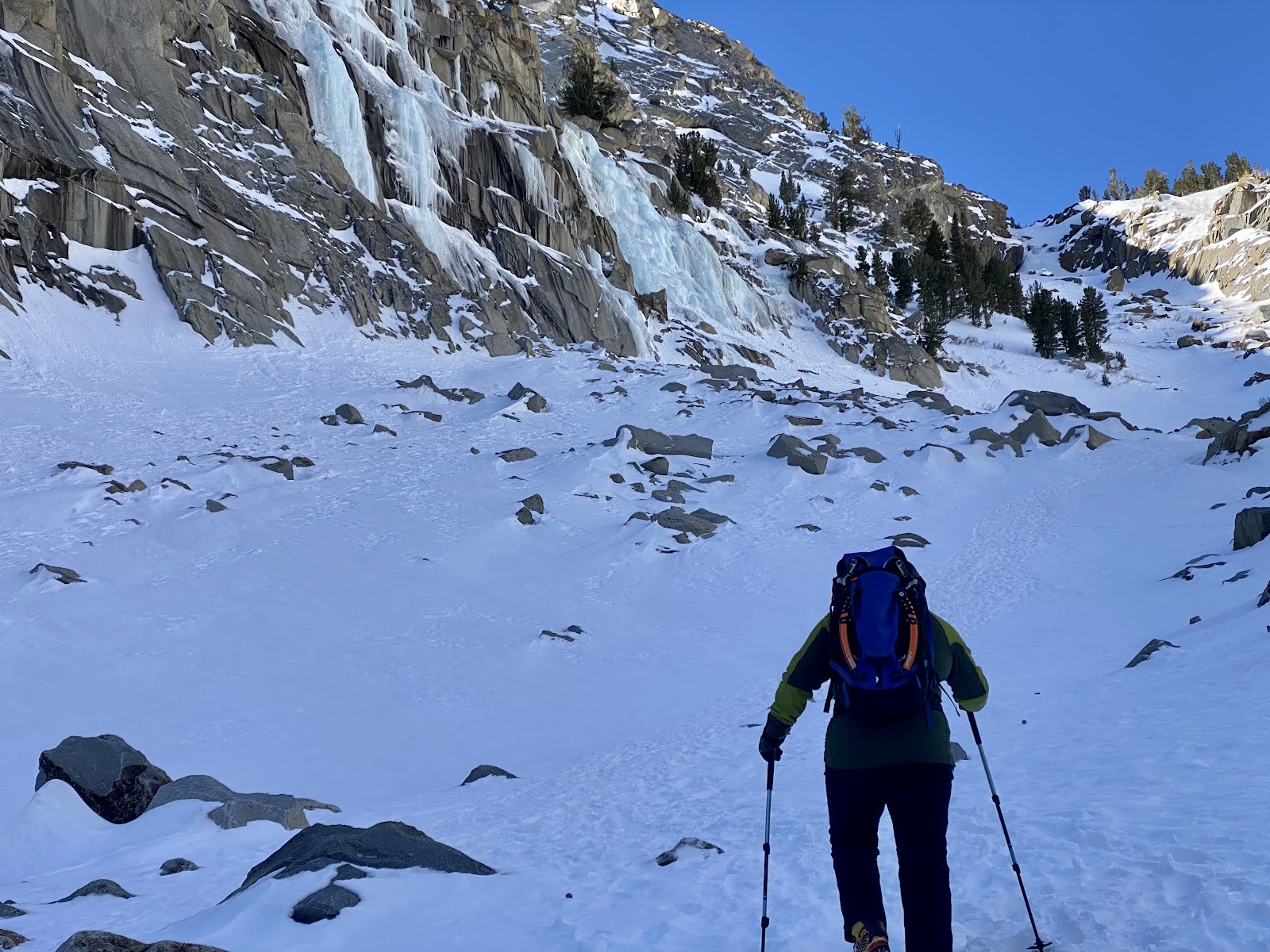 Well folks it’s been a pretty dang good season for ice climbing here in the Eastern Sierra, if you went to Lee Vining that is! Just kidding June Lake had some stellar days too! As well as a couple other early season backcountry zones. This will likely be the last Ice Report for the 20/21 season. 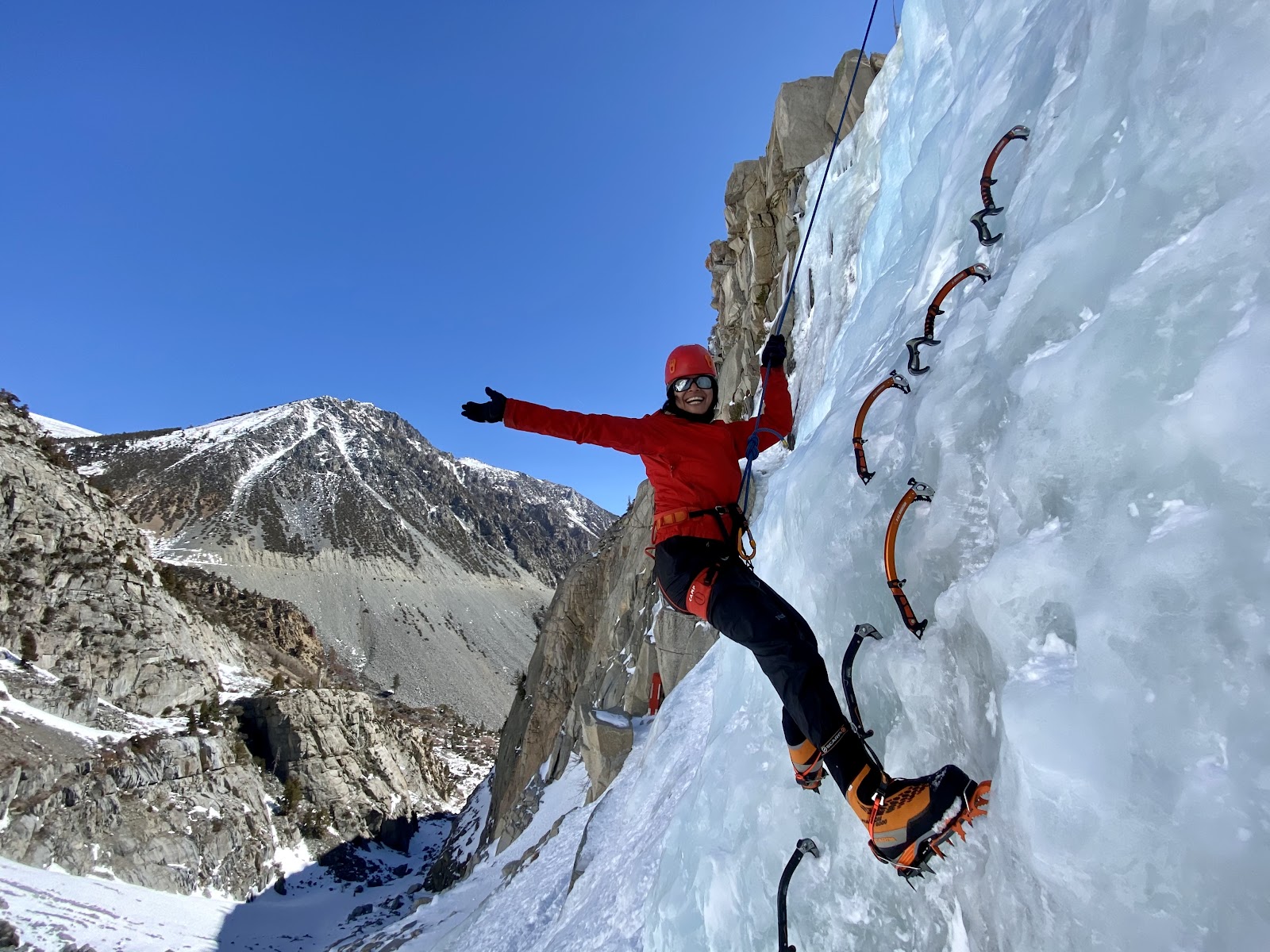 This past weekend I climbed in Lee Vining for my last days of ice guiding in the 20/21 season. It was an incredible weekend out there with almost the whole zone to ourselves, on bluebird, perfectly cold enough, zero wind days! Chouinards Wall is actually still filling back in overnight with essentially only the flanks not really healing up. Comrad’s Corner will likely become a fully mixed route in just a day or two. The ice just to the climbers right of Comrad’s Corner is starting to hollow out and will likely be the next thing to go. All of the ice in the middle of the Chouinards Wall, over to where Tree Route starts, is still climbing really well. Tree Route proper could be climbed quite easily without a single swing at the moment and seems like it’s going to stay that way. All of the bolt anchors, except for the middle set, were all still accessible. 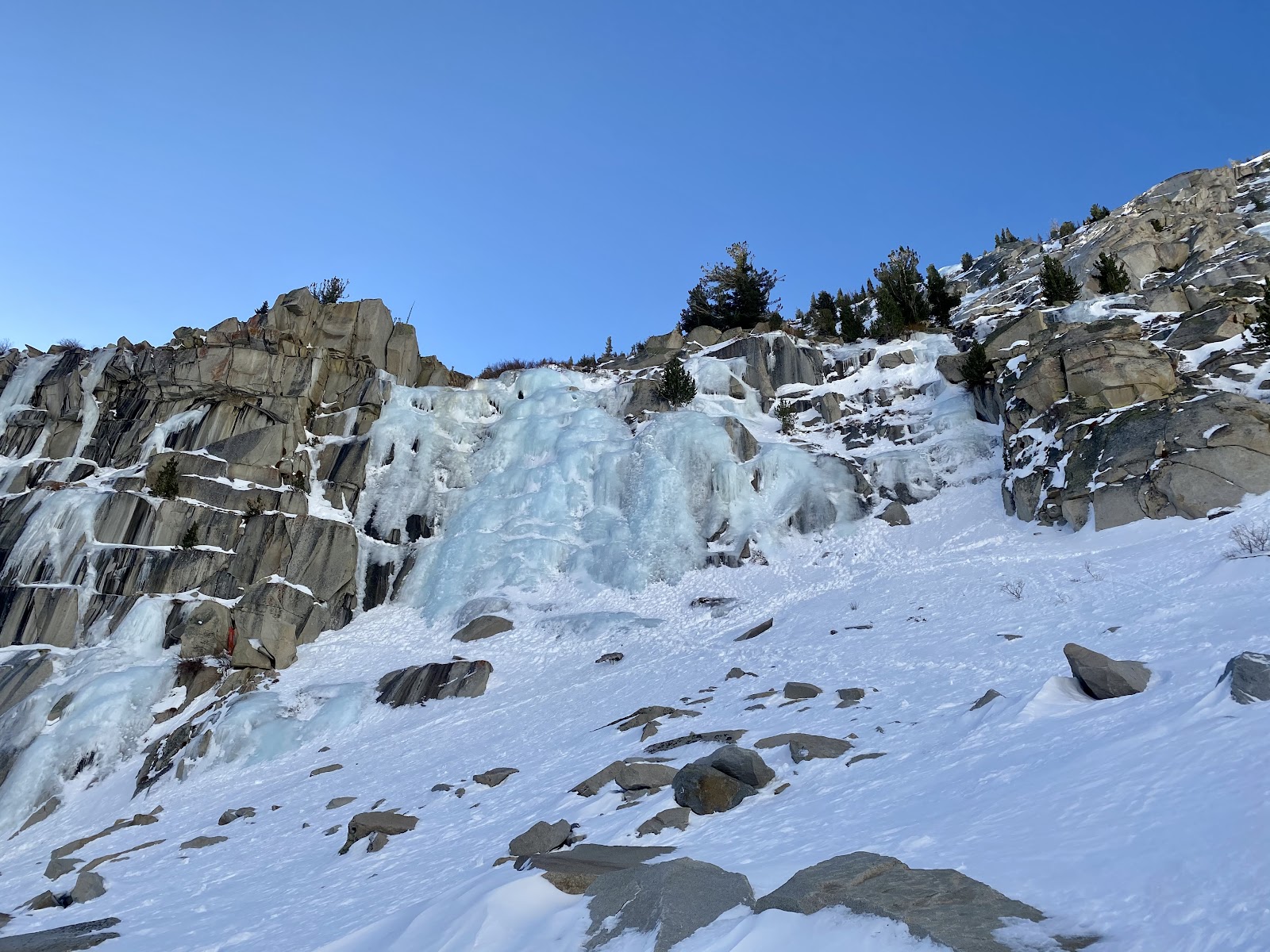 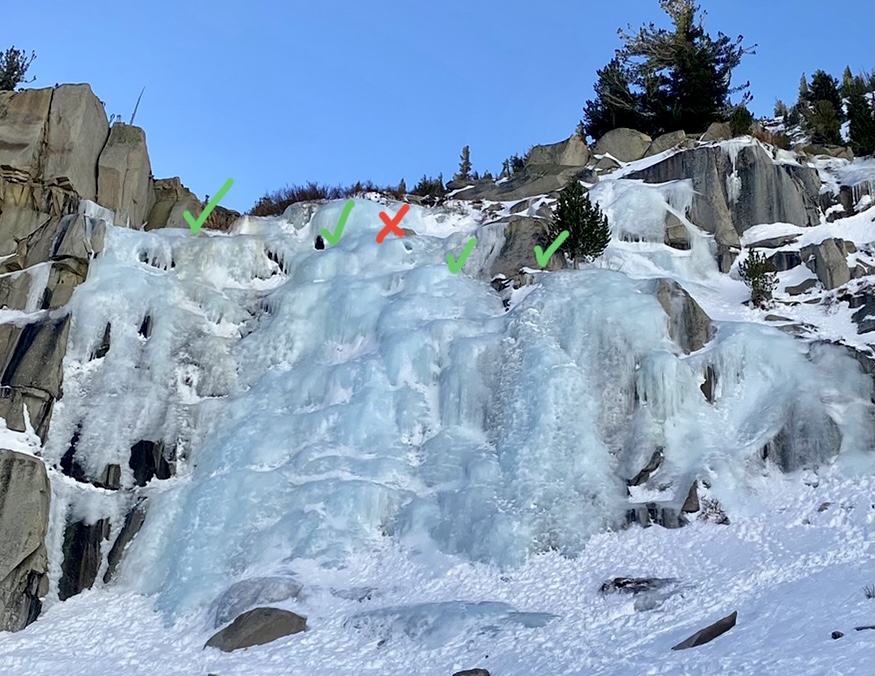 Accessible anchors 3/28/21 Note: the second anchor from the left is deep inside of an ice cave.

The approach to LVC is starting to melt out down low and the initial talus field will start to get pretty cruxy in the next few days. Past the first creek crossing, just below the Narrow, still has a great boot pack in. 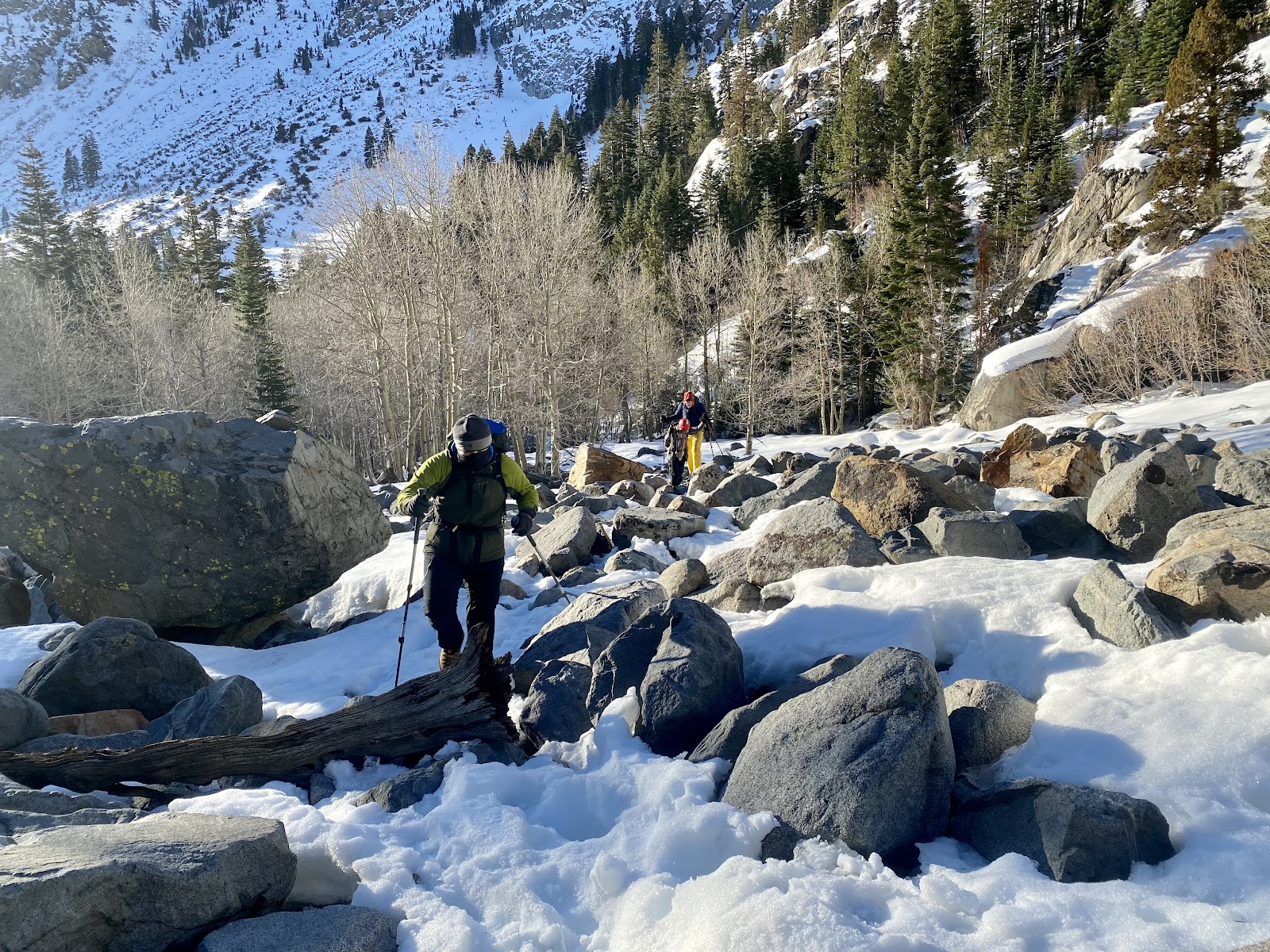 The Main Wall still looked climbable for Caveman the Center Flow, although I haven’t been on either of these in a couple weeks. 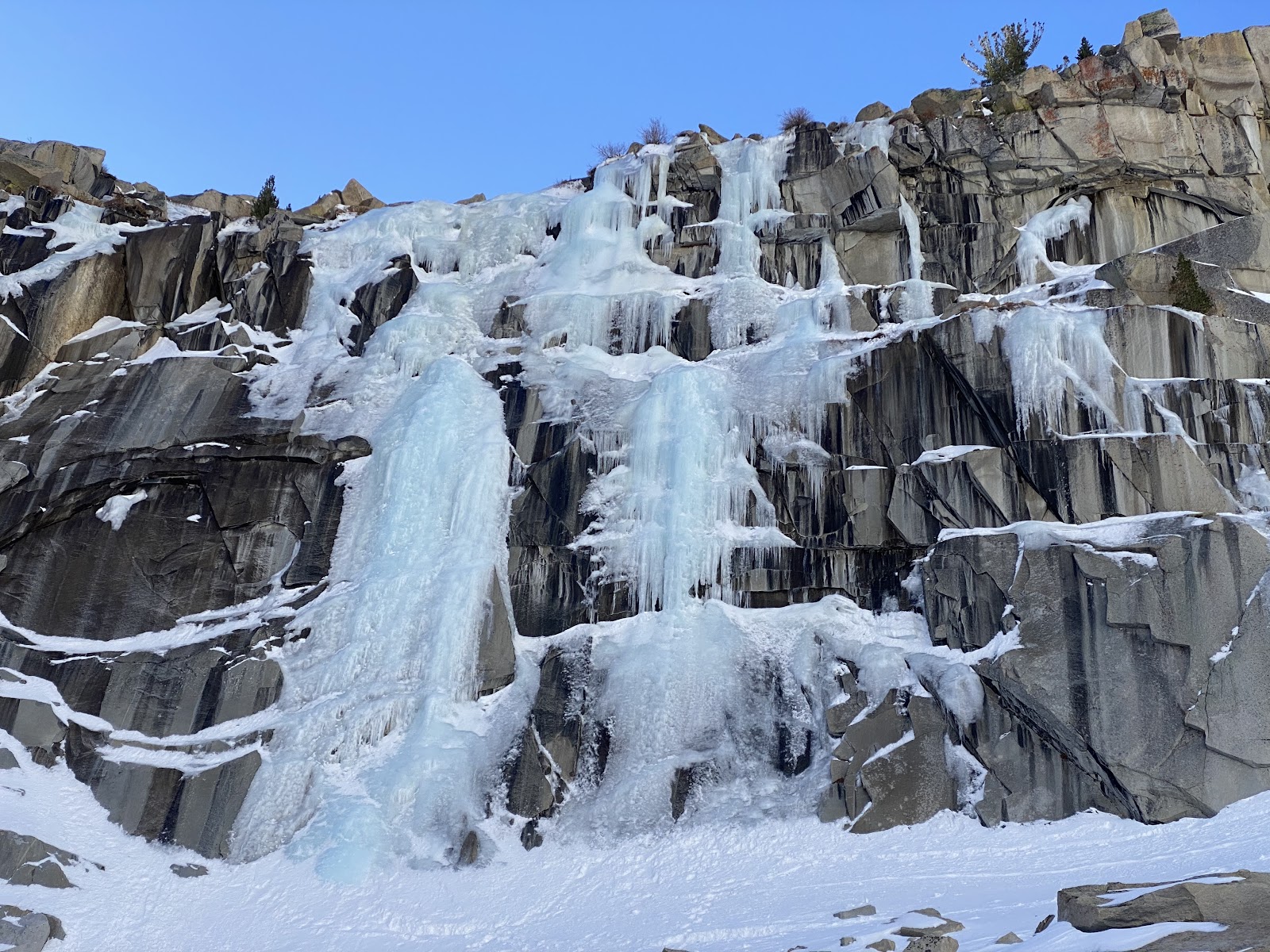 Aside from some stellar climbing, and very few other users out this weekend, I did witness quite a bit of ice falling off of the wall in between the Main Wall and Chouinards Wall, as well as some

things falling off near the Comrads Corner route at the Chouinards Wall. Both zones from top to bottom are coming into full sun from around 3pm to 4pm. I didn’t see or hear anything too big come down but they’re likely just around the corner by a couple days or so. The forecast next week has 4 days (Thursday-Sunday) in a row with temps not getting below freezing for the LVC area.