Posted at 00:07h in Trip Reports by Viren Perumal
The lack of snow and cold short days may get some skiers down this time of year, but not for those willing to hike a little and swing some tools in the frozen seeps of the Eastern Sierra.  The Parker Canyon trail head typically gets buried by big early season storms making the approach way too long for short winter days.  However this season, we have little to no coverage at the lower elevations and were able to drive up to the upper trail-head access for Parker Lake (High clearance and 4WD needed)
The drive in was an adventure in itself, as Lyra’s 4-runner bounced around the road and those of us in the back wished we had our helmets on. The approach hike which was an enjoyable 2 hours and 15 minutes had us going up and over a moraine, on a good trail to Parker lake, crossing the glassy lake that was iced over, and then traveling cross country with a little bushwacking up to the base of the ice flow. 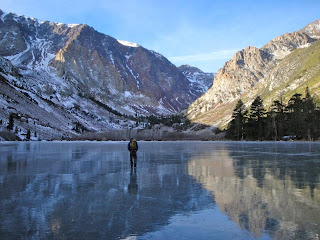 the view up-canyon from Parker Lake (you can see the climbing higher up the canyon in the shade)
The bulk of the ice was around 60-90 Meters tall and had several different sections of varying difficulty (WI – 2-4).  We chose to start on the left flow which had really nice ice, though the cold night yielded some dinnerplating on the bulges.  Above the main flow, the drainage continued for 300-400 Meters of really fun ice (WI 2) which I was able to solo up and get high enough to have some amazing views and bask in the sun.  We then top roped some of the steeper ice on the main flow that looked a little too chandeliered  to lead (though I suspect that will form in over the next several cold nights). 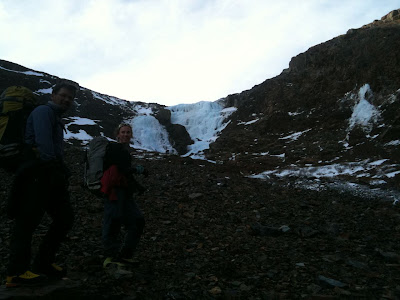 Dave and Lyra (SMG guides) approaching the ice (it really was steeper than it looks- the left flow is WI 2-3 and the right flow is WI 3-4)
We noticed several other thinner flows on the north side of the canyon, though the sun hits the tops of them and they may contain rotten or unstable ice. 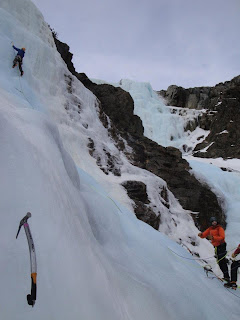 Overall a great adventure with a nice remote feel and every aspect of the day being really fun (except for the icy cold breeze)  we were greeted by a full moon rising on the last leg of our hike out which topped off a perfect day of adventure in the Eastern Sierra. 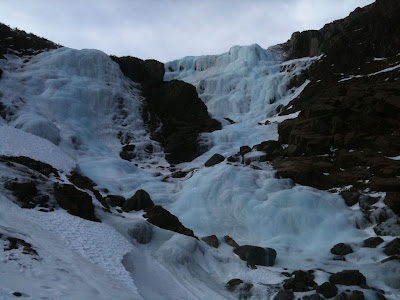 This is one of the better venues to teach ice climbing … the approach is just a little long for these short days, and the trail-head will get shut down once we get our first big storm.  The fun lower angle ice down low is a great way to ease into the season, but will get buried by snow making the flow quite a bit shorter.  Get it while it’s good!
~Viren P.