Mount Whitney: East Face vs. East Buttress. Which is better?

Posted at 14:54h in From the Range of Light & Fast, Guide Tips by Howie Schwartz

Which route is better, the East Face or the East Buttress?

The classic question we get regarding technical routes on Mount Whitney. Well, do you like chocolate or vanilla? Very different flavors, both immensely pleasurable. Let’s break it down.

One of the major considerations when evaluating the aesthetics of a climbing route is the line. Does it appear natural, allowing for consistent and continuous climbing progress? Does the climbing finish on an obvious high point like a summit? How much of the climbing is fun, not overly awkward, uncomfortable, or otherwise unpleasurable? Is the rock quality solid? How is the route exposed to the weather – sun, shade, wind, water, precipitation? How is the position – meaning the stances, features, views, and exposure one gets to experience on the route. How long is the climb, does the fun last a long time? Does the technical ropework or routefinding detract from the enjoyment of the climbing experience? Is there an historical element that adds to the experience? What is the approach/descent:climbing fun ratio (is the climb worth the effort to get to and from it)? What is the commitment or adventure factor?

Obviously, the evaluation of many of these factors is entirely subjective. Since the approach and descent are nearly identical, and the technical difficulty rating is the same at 5.7, these two routes measure up similarly, and contrast based on aesthetics and preferences of a given climbing team. Here are the differences to consider: 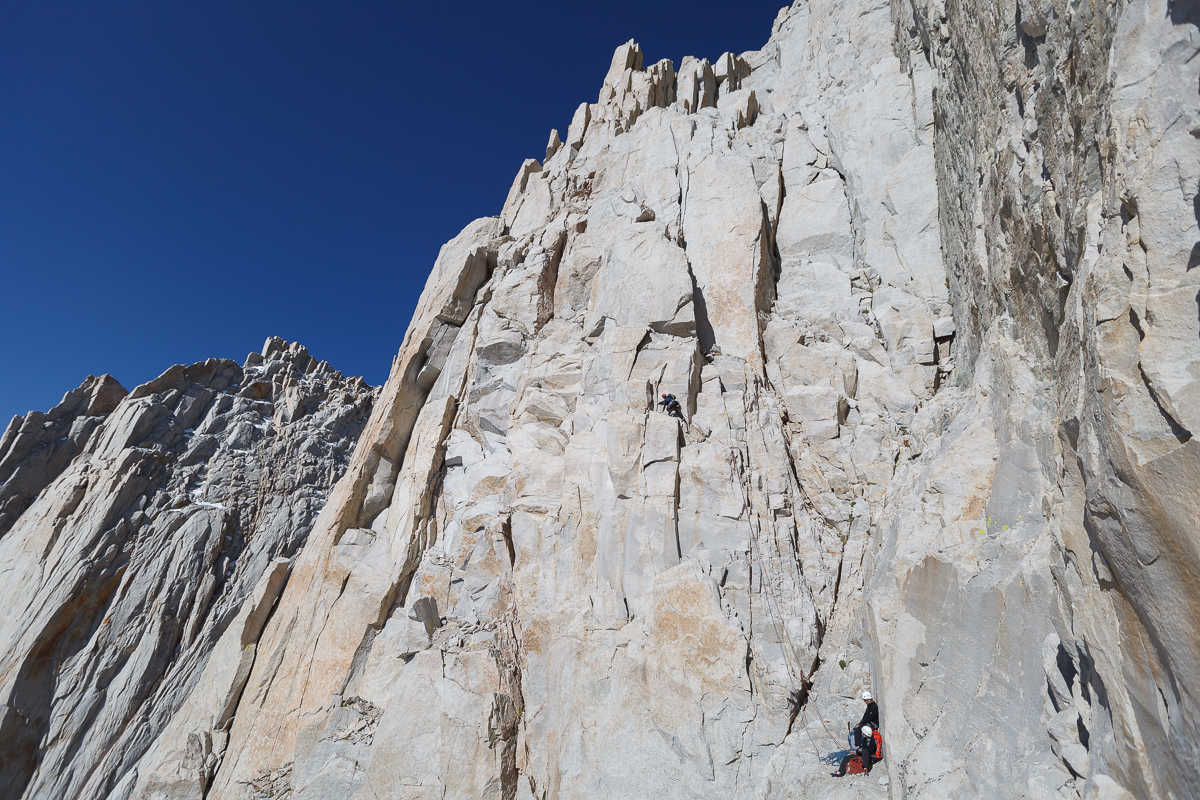 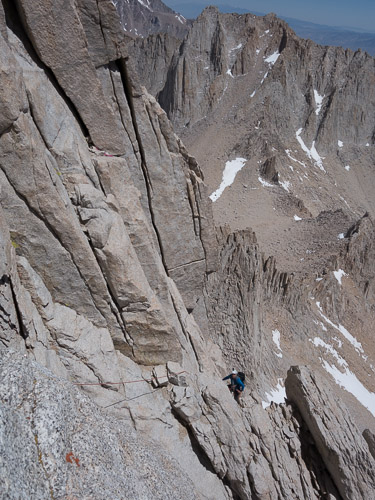 Sending the East Buttress with IFMGA guide Howie Schwartz and Vatche B.

So… which is the better route? That is going to be up to you. And the only way to know is to do both and compare! I have, many times,  and if I had to choose one, it would depend on the people I am with, the weather for the day, and perhaps the group’s inspiration at the time. These routes are so good that really they should both be on your list. If there is any doubt about members of the group or the weather, the East Buttress is a bit less committing, especially low on the route, and it is more simple to keep the risk factor lower for the second with good rope management skills and climbing systems.

A note about choosing the East Face:

It used to be that the East Buttress was rated 5.7 and the East Face 5.6 in the guidebooks. Now it is generally accepted that both standard variations have very small sections of 5.7. On the East Face the 5.7 crux comes at the top of the Grand Staircase pitch, and the East Buttress has some 5.7 around pitch 3 where some guidebooks say there is “poor pro.” It is pretty easy to get 2 good small pieces, (a small nut and a ball nut or tiny TCU recommended) near some smashed pins in a scar right before the East Buttress crux. Some careful climbing will lead you through a 20 foot runout section to a ledge and another good piece of pro. If your leading is not quite up for that, there is some less fun but easier and more protectable (for the leader) 5.6 climbing to the right where you can avoid that pitch. In any case, the lower rating for the East Face and the “poor pro” on the crux of the East Buttress have caused more novice alpinists to gravitate toward the East Face over the East Buttress. We consider the East Face a more advanced guiding route and we carefully screen our climbers for it. As guides our job is to maximize safety, efficiency, and enjoyment for our guests. It actually takes more rope handling skill and situational savvy to guide the terrain of the East Face effectively. Because retreat is difficult on the Face, it is important that we are confident about both the ability of the people we climb with and the weather forecast. We have seen climbers with a fair amount of experience have various technical issues on this route. Here is an example of a video originally posted to You Tube of a guide from another (unknown) guide service taking his guests off route below the Fresh Air Traverse, nearly resulting in serious injuries in two separate falls. Yikes!

So treat the East Face with the respect it deserves and imagine yourself as Underhill, Dawson, Eichorn, and Clyde finding your way through that terrain for the first time ever in 1931 with a hemp rope, big boots, a giant sack full of pitons, and just a giant sack!