Posted at 20:44h in Trip Reports by Neil Satterfield

In The Good, the Great, and the Awesome Peter Croft says of Mt. Conness’s North Ridge, “This route has the most alpine feel of the Conness routes….” and describes it as “undeniably classic.” That’s exactly what we got climbing it this last Friday. Due to old man winter and his cronies hanging around longer this year, Conness looked more like the Sierra in March rather than late June. What is normally scree, scree and more scree was snow, snow, and more snow.

On the approach. This is summer?!
We got an early start, were around Saddlebag Lake in no time, and before long crampons were on, ice axes were out and it was on. 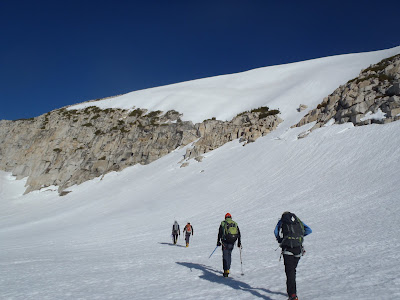 We headed up the snow field on the right, then climbed up and moved left along the snow toward the ridge where the climb began. 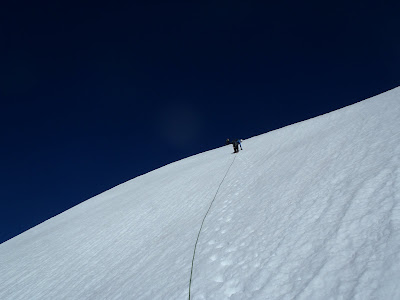 Pitching it out on what turned out to be fairly steep snow. One pitch up put us in a much better position.
We short-roped along the snowy ridge before and gained the first tower before we could finally ditch the crampons and do some normal climbing. The sound of crampons grinding on stone is none too pleasing.

Looking up the ridge, just after the initial snowfield climb.  This is before we took crampons off. 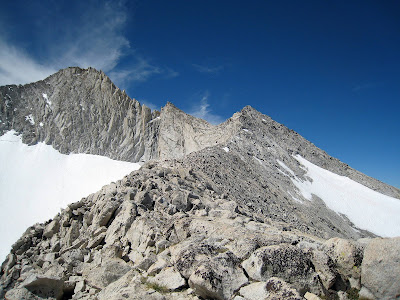 A similar photo, early season, from mountainproject.com.  Look at how much less snow there is than when we were there! 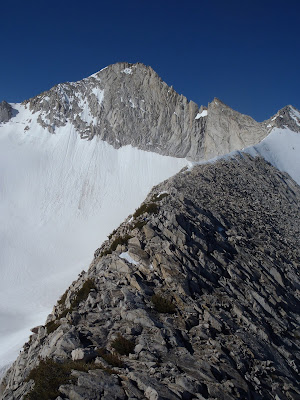 Another shot of the ridge. 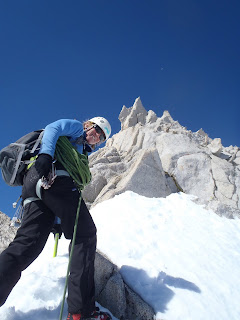 Barbara rocking it on lead. 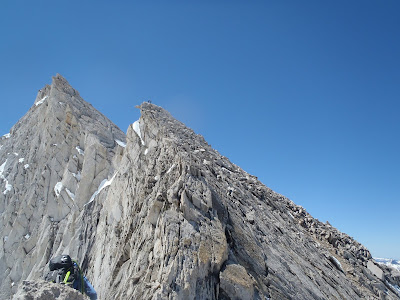 Steve and John on top of the first tower (on the right).
Once we gained the first tower it was 2 rappels before the 5th class climbing began.  After the rappels we roped up and headed for the summit.  We got the treat of ducking around a corner and climbing over some seriously exposed terrain.  Fun-scary, for sure!
A 360 from the summit.
We summited, but as you know, that’s only half the battle.  We had soft snow on the descent and definitely wanted to stay away from south-facing slopes.  What first seemed like it could have been a bit of a dicey descent was some down-climbing, a rappel, and lots of awesome glissading. 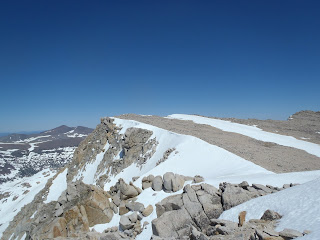 The plateau after downclimbing and before the rappel. 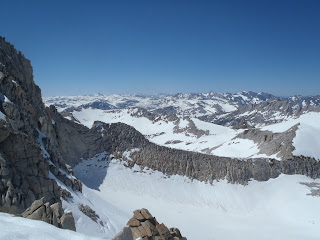 The ridge we climbed as seen from the descent.  The first steeper section and change in incline on the left, moving right to left, is the first tower.
Steve showing us how it’s done!
We ended up getting back to camp and continuing on down to the cars for a victory dinner at the Mobil.  An awesome alpine climb, snow, rock, beautiful weather, beautiful views, glissading; what more could you ask for?  What a great day.