Posted at 17:27h in Trip Reports by Howie Schwartz
There are a multitude of reasons for wanting to climb a mountain, particularly in winter, when the forecast is for high winds and brutal cold.”Because it’s there”might suffice as an answer if you were George Mallory and equipped with the nearly extinct elan that possessed his generation of climbers. Meeting the group that morning, appropriately if inauspiciously, at the Mt. Whitney cafe, I caught myself asking the same question. How do a group of nine people, whose backgrounds are as varied as a former British commando, a prison guard and a couple of special effects wizards, largely exclusive of each other come together and decide to climb a mountain? The answers, I was sure, would be as varied as the climbers themselves.
After checking our packs for the requisite items, and dividing group gear into the ever increasing piles of things that we were faced with carrying up a mountain we started in a convoy of three SUV’s up the Whitney Portal road. The drive consisted of a sinuous stretch of steady climbing, skirting an enormous Road Closed sign, and working our way through the kind of rock fall one would expect from the shaky camera footage of an Afghan war zone. The parking lot by comparison was cool, and the trail itself bordered by massive Jeffrey pines that provided an immediate sense of remoteness and adventure. Thirty minutes of walking found us in a broad snow filled canyon, battling willows for supremacy over the trail and back in the warm winter sun. Arriving at the base of the ledges we ferried the groups packs over the narrow and grit covered scramble that lead off the canyon floor and up to the last section of trail before our first camp. The sun was threatening to dip behind the mountains and plunge us back into the chill of winter as we arrived at Boy Scout lake. We set up camp and shortly had water boiling to combat the encroaching cold with steaming cups of hot chocolate. After Bernd and Lyra demonstrated their exemplary backcountry cooking skills with dinner and boiled another pot of water for a second round of hot drinks before the group dispersed to their tents for the night. 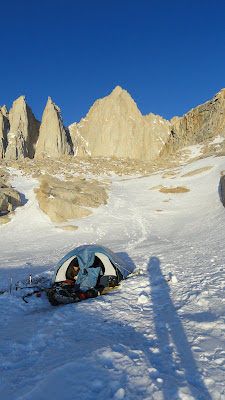 The sun, which from our vantage rose virtually unimpeded in the east shone on us early and we begrudgingly made our way out into the cold and begun to deconstruct our tents and repack our bags. The conditions above boy Scout lake alternated between firm wind bored snow, perfect for crampons, and post holing through feet of sugar and willows that was so bad it inspired one of our team, a hardened veteran of an Everest expedition to write a limerick lamenting his trials.There was also the view. Tiers of brilliantly blue water ice beckoned, to those heedless of the their natural apprehensions, to be climbed. The sun glowed red on the rock, clouds whipped by high winds into strands wavered like banners across the sky, and the spire of Whitney rose before us. We camped that evening on the moraine below Iceberg lake, re-hydrating with mugfuls of hot Miso soup and eating heaping bowls of pasta before turning in.
The morning of the summit we woke at some excruciating hour that left you immediately convinced that you’d only been asleep for a few minutes. After oatmeal, and enough coffee induced clarity to realize that we weren’t dreaming and that we were indeed going to climb a 14 thousand foot mountain in winter, we shouldered our light summit packs and move single file into the darkness. When the sun emerged it seemed to bring little warmth, our first break resembled a survival huddle and we were hard pressed to remove our down jackets for the next leg in spite of the level of exertion it promised. Now, the snow conditions could be described as something close to sublime, with each step cutting a perfect foothold in the snow. We climbed steeply up the Couloir, using a crossover step to switchback between the rock walls. Our next break saw us at the top of the Couloir with the rocky summit of Whitney ahead of us just beyond sight. The wind cut through layers of soft shell and insulation and brought with it a bone chilling cold as we removed our crampons and stowed our axes in preparation for the climb that stood between us and the summit. We stretched out our ropes, put gloved hands on the warmth leeching rock and began to climb. The team was fit, and moved with surprising grace and speed, sometimes on belay, sometimes completely relying on each others ability for that extra measure of safety. Soon we reached up and pulled over the last rock step and realized there was no more vertical terrain in front of us, that we were standing on top. The cold didn’t curb our enthusiasm, but the photos at the top were taken quickly, and after a quick snack and some water we began our descent retreating from the wind. 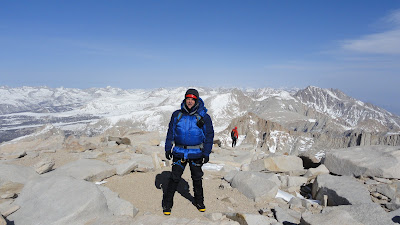 The last day the group got up and broke down camp as if running through some lifelong routine. The wind had abated and before long we were stopping to shed layers in the sudden warmth. The team dispensed with the descent of the ledges efficiently and before long we were back in the cool of the pines that offered a surprisingly welcome shade. A few days of dis-habituating in the wilds of the Sierra and Lone Pine had the buzz and tempo of New York, but we still retained our fundamental survival instincts and quickly made our way to a local pizza joint to celebrate and say our goodbyes 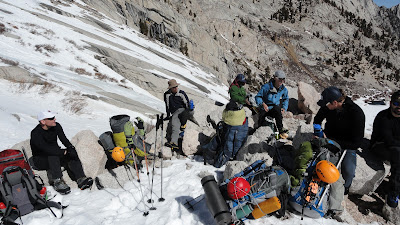 So why did a bunch of people from all over and America and the world show up and decide to climb a mountain. Probably no far reaching or transcendent purpose, certainly for reasons beneath divine interest. Most likely because there are few things that serve to challenge us as physically, mentally, emotionally as climbing a big mountain. Few things as incredible or inspiring, as being there with friends, and others that seek their inspiration in the thin air and stark beauty of the mountains. Or maybe just because it was there.