Posted at 21:00h in Trip Reports by Jediah Porter
Jon asked the typical questions.  “How many times have you done the Palisade Traverse?”  “Does it ever get boring?”  The first question does not have a ready answer, which is the reason that the second does.  First of all, it never gets boring in the Palisades.  That is because it is never the same twice.  I have indeed spent a lot of time on the ridge-crest between Thunderbolt and Sill.  Guiding and personal trips have had me up there linking at least four of the area’s five “14ers” eight times in the last four years.  And that doesn’t count the attempts that came up short.  I can honestly say that no two of those trips were at all alike.  This trip with ultra-running and self-deprecating B.A. Jon A. was no exception.  We wanted to get Jon up there early in the season, and keep us both in approach shoes the entire way.  We wanted to get some huge days of traversing under our harnesses.  Fulfilling these objectives would get Jon on his way to his next big mission.  Stay tuned, and in the meantime ponder that this was just Jon’s “warm-up”.

Anyway, we set out to tweak the standard guided Palisade Traverse itinerary.  Inspired by our very own Peter Croft‘s interpretation of this mega-classic traverse, we set out to approach and exit on the east and connect Winchell Col and Mt. Sill via the crest.  Measured on Google Earth (using my new favorite tech tool, USGS topo overlays available here) this section of ridge is a mile and a half.  The “meat” of it is found between Thunderbolt and Polemonium.  This section contains the best rock in the Palisades and the highest concentration of technical 14ers in the country.  And this section is just a half-mile long.  The often, and understandably, skipped NW ridge of Thunderbolt is a half-mile long on its own.  The mathematician will quickly deduce that the section from Polemonium to Sill is a half-mile long also.  In any case, we couldn’t let Jon settle for anything less than the whole beast. 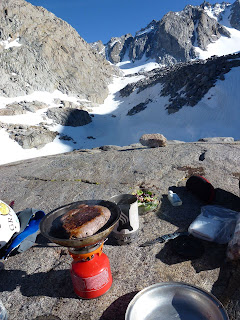 Jon and I met in Bishop on Tuesday morning to talk logistics and gear, then headed out to the North Fork of Big Pine Creek.  We busted in, as quickly as we could, to the Thunderbolt Glacier tarn camp.  We napped on Yosemite-style glacier polish and grubbed on a big fat steak.  That’s livin’.

We woke with the sun on the chilly first morning and strode over to Winchell Col.  That NW ridge has rock that is a little looser than further along, but it is a totally worthy addition to the traverse.  We found mainly dry Cali rock, but did have to do some icy PataLaska style tunneling.

I hate to say it, but the section from Thunderbolt to North Palisade was almost “routine”.  What a joy to traverse very familiar terrain with a strong partner.  I don’t pretend to think that Jon felt it was routine, nor do I mean any disrespect to this chunk of terrain.  I was simply content to remember my first trip through that section a few years back and reflect on the accumulation of experiences there.  Jon, in his way, will down-play his own performance.  But, mark my words, the guy can move and tough it out.  As much as he talks about enjoying suffering, I can only guess the misery this 100 mile runner can stand.

We woke, again with the sun, on the morning of day 3 high in the S. Bowl of North Pal.  We knew we had made better than excellent progress, and even had the hubris to propose making the trailhead a whole day early.  In the end we did exactly that, going from North Palisade over Polemonium to Sill and down and out.  This last day was long, but felt like the wind-down after the prior day’s blitz.  All that, and we didn’t short ourselves on anything:  We slept, ate, and drank what we needed.  We gathered a bazillion gigs of data via a total of five cameras.  We never walked or climbed by headlamp.  We did indeed work hard, but, as Sam Ewing said “Hard work spotlights the character of people:  some turn up their sleeves, some turn up their noses, and some don’t turn up at all.”  Jon turned up and turned it on.  He very well may cite various challenges faced up in those Palisades, but as an observer, I can vouch for smooth adaptation to considerable difficulty.