Posted at 09:57h in Trip Reports by Neil Satterfield
After our adventure on Roseg we woke up to 20cm of new snow at the hut.  We were planning on climbing the Biancograt but decided to head down the valley back to Pontresina.  It was a beautiful hike and the trail put us right in town.  We spent some time repacking and then caught the train to the Diavollezza.  We rode the cable car up to the hotel and checked in.  After a great dinner we turned in early.  Another 3am start found us ready to give Piz Palu a try.  It was a cold and cloudy morning when we began our trek to the peak.  We hit the glacier and began breaking trail through all the new snow.  At daybreak we were treated to an amazing sunrise and our first views of the peaks.  To be standing in the middle of a huge glacier caught in the glow of sunrise and surrounded by huge peaks was very special.  As we got higher the snow got deeper and more wind effected making the going tough.  At one point we started to see other groups coming up the glacier behind us.  We made for the saddle on the shoulder of Piz Palu and took a well-deserved break.  The other guided groups caught up to us at the shoulder and were very thankful for the track we had put in.  Instead of passing us the other groups let us continue up to be first to the summit.  Some steep snow climbing and a long knife-edge snow ridge let us over the three summits of Palu. We retraced out steps back to the Diavollezza and had a great lunch after a great day. 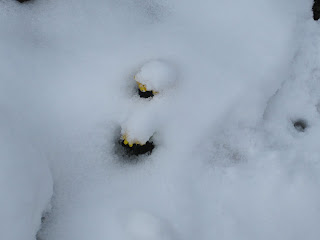