Posted at 11:12h in Trip Reports by Neil Satterfield
Yet another 3am start found us winding our way up the moraine in the dark following the reflector trail.  We got on the glacier and wound above the huge icefall to the couloir leading to the first col of the day.  Another beautiful sunrise greeted us we saw the objectives ahead of us.  The couloir offered some ice, snow and rock climbing on our way to the summit of Dirruhorn (4035m).  We climbed back down the ridge to the col and continued on steep snow and mixed climbing to our second peak of the day Hoberghorn (4218m).  From there a steep mixed ridge let us to our third summit of the day Stedknadelhorn (4241m).  With views of the Matterhorn, Dom and the grand Alps we were in awe.  Another knife-edge snow ridge led us to a steep traverse under the north face of the Nadelhorn.  When we reached the ridge we decided we were done for the day and descended to the Windjoch (wind col).  We dropped down the other side of the Windjoch in the clouds and descended to the Mischabel hut.  When all was said and done we had climbed three 4000m peaks using all our climbing skills along the way.  Considering the grim weather in other places we had a fantastic day in the hills.  After finding out that we needed a 3:30am start the next day we hit the sack for some well-deserved rest.  The next morning found us tired but in good spirits as we climbed back up to the Windjoch.  We retraced out steps up the steep ridge of the Nadelhorn (4327m) and continued to the summit with some fun mixed snow, ice, and rock climbing. We retraced out steps back down to the Windjoch and then climbed more steep snow to the summit of the Ulrichshorn (3925).  Then began the long decent back to the Bodier hut and a great hot lunch.  The weather was threatening again as we made our way back to the cars.  After just three days we had packed 5 summits, over 10,000 feet of climbing and descending, and two different huts into our weather window. 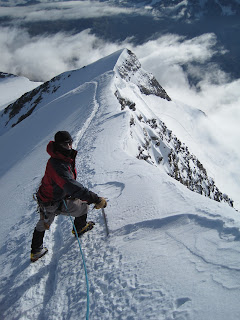