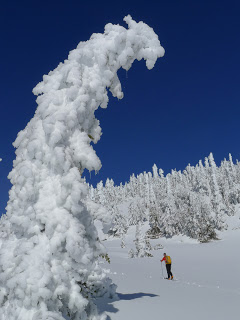 What an interesting season it has been so far. The winter started off perfectly with big wet storms in early December,
followed by high ratio snow dumps with uncharacteristically calm winds. This all gave us a very memorable early season of deep light powder skiing throughout the Sierra. It feels like a distant memory now. January featured it’s usual June-uary thaw and began a drought that plagued us all producing record breaking low precip for the two month Jan-Feb time period. March came in like a lamb, and since then it has been highly variable, and unremarkable weather in the Sierra. We have experienced intense warming with little freeze, as well as profound low temps that resulted in some icy and firm backcountry conditions. There has been decent corn skiing for those who have hit it right and/or been willing to carry skis a bit for it. Weak storm systems that split upon reaching our mountains, or just brushed past them produced storms averaging around 2-8 inches of snow at a time and giving us fleeting moments of fun, powdery skiing on top of a mix of
crusts and sugary facets. The winds have finally come to the range with the last storms where winds up to 120 mph were measured. This has smoothed out some sun effects and should help create some decent corn skiing in the coming weeks.

A few highlights to show conditions over the season:

What does this mean for us as backcountry skiers and snowboarders? Well, first of all, get it while you still can. Soon the roads will open and allow a nice wave of access to deeper snowpacks. But it won’t last very long, at least not unless we have some sort of unlikely miracle event in May. Until then, target backcountry trips where the snow is, and that is pretty predictable these days.

Here is how I would describe where to find it: The best High Sierra snow coverage is currently located above 10,000 feet, North of the Palisades and just West of the Sierra Crest. The map below shows this graphically, where the green line and above is the approximate area of most snow, the yellow line and above represents marginal coverage, and the red line and above marks hiking terrain. (below the red line is considered foothills/valleys that are obviously snow free at this time)

In addition to what you can represent on a map, upper elevation slopes and gullies more exposed to wind and sun are shockingly barren throughout the range. Along the Eastside there is already not enough snow down low on many sunny aspect slopes and couloirs, so the corn season could be better in May when when roads open further and more northerly aspects get more sun. Crest Tours are generally not recommended this spring, except in places like the Ritter Range, Goddard Divide, and perhaps the Sawtooths. Trans-Sierra tours like the High Route should be low tide but OK, just be prepared for significant extra hiking on the in and the out and understand that you may have to portage your skis across barren patches with relative frequency.

Be strategic for the rest of the season in planning your ski outings. For example:

Enjoy what we have, and remember that this is the season to milk and savor every last turn. Hammer on those ski boots and fill them with mud. Scrape those edges on the rocks and don’t worry too much about it. The snowline is rising and pretty soon it will be prime alpine climbing season. And next to more skiing and riding, what could be better than that? – Howie