What a season. It is hard to process it all, but suffice it to say that it has been the best in years. Sure, the El Niño turned into something of an el None yo, and that left a lingering air of disappointment that many just couldn’t get over. On the bright side, complaints about snow quantity were tempered by consistently high snow quality. There were very few days this season where the goods could not be found, whether that was cold smoke pow, hot pow, surface facet slashing, carveable buttery windbuff, false corn, or true corn, it was all incredibly good. The last month in particular, has been a period of magical convergence of adequate snow coverage, outstanding riding conditions of both winter and spring persuasions, mostly stable avalanche conditions, and California high pressure with sunny, calm days and crisp nights. If the season (or the world?) were to end tomorrow, it is these last 4-5 weeks that will be remembered from 2015-16.

But alas, the season is far from over. This is our annual spring snow conditions report for the Eastern Sierra where we let you, our backcountry community, know where we stand as we head into the last several weeks of the season before transitioning our reporting to summer alpine conditions. We hope it is useful for your trip planning.

Let’s start with the Sierra snowpack. April 1 is the benchmark for the snowpack year maximum. Our friends at the California Cooperative Snow Surveys are reporting the following % of April 1 averages from the Sierra Nevada:

The bottom three in the list above represent most of our Eastern Sierra backcountry terrain. Sites form the basins that are at least above 90% of average are, not surprisingly: Sonora Pass, Tioga Pass, Ellery Lake, & Mammoth Pass. This reflects the the concentration and distribution of storms and snowfall that we received this season. Breaking it down a bit more, we can see the following interesting stats:

This reflects that most storms of the season were focused in the Mammoth area and north, and that the snowline was often relatively high, above 9000 feet. There were a bare handful of days this season where we were able to ski into the desert or enjoy the terrain south of Rock Creek without a decent bit of hiking through sagebrush. In the Mount Whitney region it was possible to hike without skis or snowshoes to Upper Boy Scout Lake since late February.

Looking up at the Eastern escarpment from anywhere along Highway 395 makes it seem like the backcountry season is wrapping up in short order. Many locals have started once again shaving their legs for cycling (why do they do that anyway?) and rock climbing at mid elevation venues such as Rock Creek Canyon and Whitney Portal are mostly snow free and easy to access. That being the case, one need only to venture upward near the Sierra crest to see the peak of the spring skiing that still awaits those willing to venture out a little further and deeper (to conjure a bit of Jeremy Jones) into the mountains.

As the snow recedes from the Eastern Sierra slopes, the roads begin to open to vehicles and the access changes. Here is the status at the time of this writing (and a current stormy period may change some of this) of what we know (some first hand, some based on reports from guides, locals, and Inyo NF representatives – please let us know if you have more updated information) of some of the more well used access points from north to south: 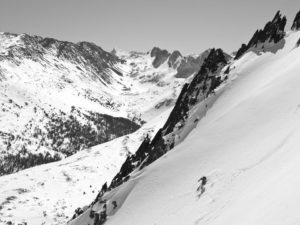 At this time, a cutoff low west of Baja is spinning up moisture into southern California and he High Sierra. This is warm air with a snow line around 9000 feet and has relatively little wind for a storm that is currently forecast to precipitate between 1-3″ of water. Bishop just received about 0.6″ of rain in the last 18 hours. Mammoth Ski Resort received 0.3″ of water equivalent in a mix of rain and snow at 9000′ since this morning. One of our guides reported dense but fun storm skiing conditions today int he June Mountain backcountry. Though it is almost mid-April and rain will destroy what little is left of the low elevation snowpack, it will provide welcome refreshment and dense coverage at upper elevations. This will help to increase the length and quality of the spring touring season. Classic steep lines such as the NE couloir on Split Mountain, the U-notch couloir, N face of Mount Gilbert, and the Checkered Demon couloir could use some more heavy snow to stick to big ice smears and rock outcrops before we can say they are in good form. When the weather stabilizes next, we should start to see another exceptional window of backcountry conditions. The long range forecast models current suggest showery weather until at least the middle of the month which will help to prolong the season a bit. Perhaps we will avoid a period of excessive winds that are common in April and we will continue to be enjoying corn up high into late May, but that will remain to be seen.

Until then, ride it while you can. Share the mountains. You will likely find more backcountry enthusiasts out there then ever before. The stoke remains high. The other day we shared the summit of Mount Locke with 10 people in 4 separate groups, so that might be some kind of record? Enjoy the season, but be safe. Be heads up for rapid changes in snow conditions and avalanche danger. It is worth pointing out that in the last decade or so, 4 out of 5 avalanche fatalities in the Eastern Sierra have occurred in the spring. Keep checking the Eastern Sierra Avalanche Center website for snowpack summaries that will be posted 3 times/week until May 1.

We have some big tours coming up in the Sawtooths and the Ritter Range with some space if any fit and experienced ski mountaineers would like to join. Great season to put together a custom guided trip to the wild Ionian Basin and the Evolution Range as well if anyone would like to talk to us about that. And of course Sierra peak descents will be the goto for corn harvesting until the final bell is rung and we try to forget all about the spirit of glisse in the Range of Light… at least for a month or two! 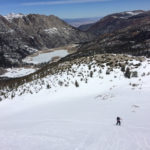 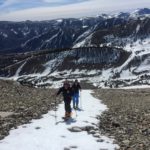 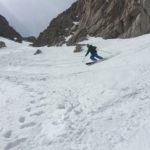 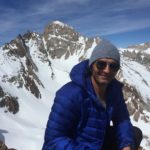 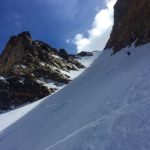 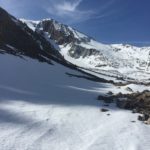 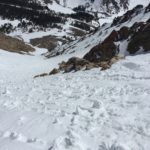 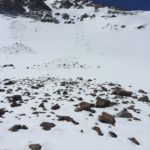 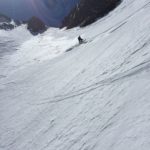 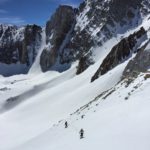 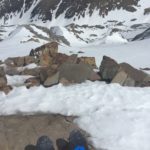 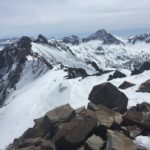 Looking out toward Red Slate from Morrison on 3/24 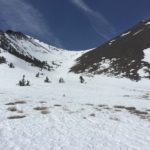 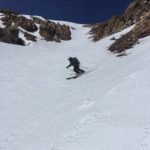 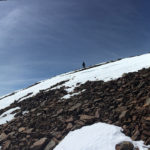 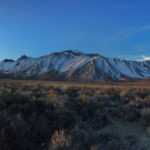 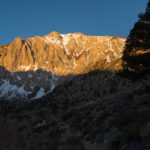 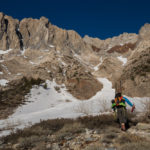 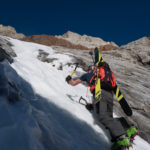 Climbing to ski the Mendenhall, during a rare window of good skiing and good stability, 3/26 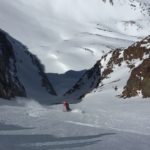 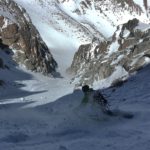 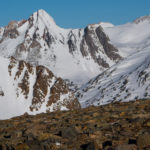 Near the Northern Yosemite border 3/17 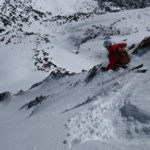 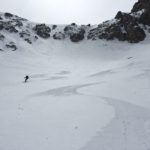 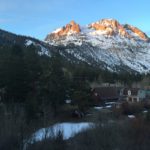 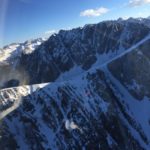 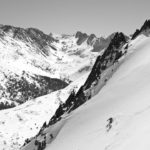 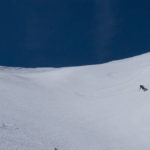