Skiers and Snowboarders! Here we are, in March of historic 2014. This is officially the driest year in California since records started being kept in the 1850’s. For all we know, it is the driest year in CA since dinosaurs walked the Earth. Other than one or two marginal days in late December my first time in the Eastern Sierra backcountry this season was February 2nd. Yes, Groundhog Day, one of the greatest holidays ever created by Americans. Punxatawney Phil saw his shadow and promised us 6 more weeks of winter. I guess you can only do so much from over there on the East Coast. He certainly delivered on that side of the continent, but over here we have been barely able to squeak by and temps into the 70s are forecasted yet again in Bishop. After a few feeble attempts, nature squashed the creatively named “ridiculously resilient ridge” of high pressure that has been blocking all of our weather for the past year-plus for a few days. The last storm hit relatively hard on the last day of February providing us with over 4 feet of new snow at upper elevations. In its wake, we have enjoyed a melange of avalanche problems from wind slab to persistent slab to deep slab to wet loose. Things have calmed and warmed and stabilized a bit but there is still a concerning layer of weak, faceted snow at the bottom of the not-so-deep Sierra snowpack. 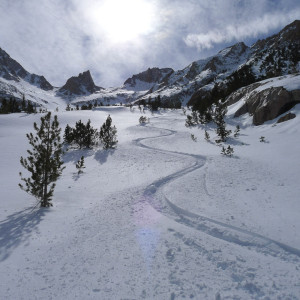 Snowpack depth across the mountains is highly variable at all elevations, maxing out at around 1.5-2 meters in the most windloaded and shaded pockets. There are still plenty of subnivean obstacles such as trees, stumps, rocks, etc. to scratch your boards on everywhere. The deepest snow and best coverage can be found just west of the Sierra Crest particularly in the Mammoth to June Lake zone. If you are planning some spring ski tours in the Sierra, it is advised not to wait too long this year. Bring your walking shoes.

Where there is snow, it is not too bad. Sheltered shaded slopes still have good boot-top powder near and above treeline. Below 9000′ the sun, warmth, and recent rain have taken a toll on ski quality and snow coverage. Up higher on sunny aspects the transitional pseudo-corn season is starting to take hold. Upper elevation shaded aspects have a mix of faceted powder, supportable, and unsupportable wind crust. This weekend, some showers should freshen the surface up and put lipstick on the pig. The 2 week outlook is still looking pretty dry, but it could change, as it has so many times this season so far. Only time will tell if March and April can deliver enough precipitation to keep us skiing into May. At this point though we can certainly write off any pre-season dreams of a decent or even salvageable winter. Let us fondly recall way back in 2011, when we had more than 650 inches of snow at Mammoth, how we took for granted the pleasures of skiing everywhere we felt like, from atop lofty Sierra summits and deep into the high desert.

Who is to blame for this pathetic season? Is it climate change? Is it a conspiracy of rock climbers? Is it congress? It was you wasn’t it?? You who did not do your snow dance?! Well, it is not too late! Put on that tutu and say it with me now – Oh, the weather outside is frightful, and the backcountry is so delightful, and since we have few places to go, let it snow, let it snow, let it SNOW!  Until then, here is a slideshow recap of some of our short season to date here. The pictures tell all…