Posted at 23:29h in Trip Reports by Howie Schwartz 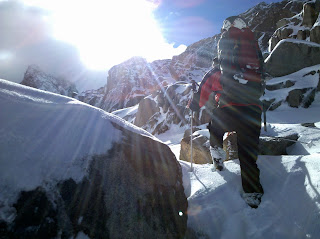 Its not often in the Sierra that we get to climb in a true storm. First of all, the Sierra doesn’t receive too much stormy weather so we are pretty spoiled in that respect. Summertime brings the occasional afternoon thunderstorm which we steer clear from. In the winter, storms are usually associated with high avalanche danger so we find other options on those days and weeks. But this time of year, as we’ve said before, brings a variety of conditions to think about. 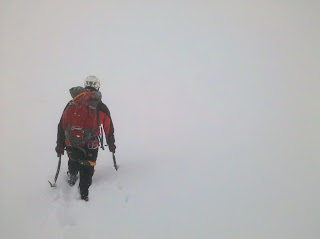 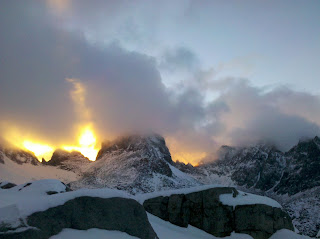 Jon A. is an SMG client that loves a good adventure. Fit, fast, and with the mouth of a sailor, he is a guy we love spending a couple of days with in the woods. When personal life took over his summer and thwarted his Evolution Traverse plans he decided to squeeze in a Palisades climb before winter took over entirely.

Little did he know that October had other things in mind. From 3rd lake onward, he and his guide Jed Porter,  were walking in snow and by the time they hit the glacier it was knee deep. Their plan was to climb the V notch and moderate temps and low wind allowed for this wintry ascent. Whiteout navigation and postholing on the glacier verified Jon’s decision to take a guide. Bergshrund crossing was fairly straightforward and the V notch was covered with 6-8 inches of new snow over the icy couloir. The top of the couloir was ice free but the ridge was covered in icy rime. 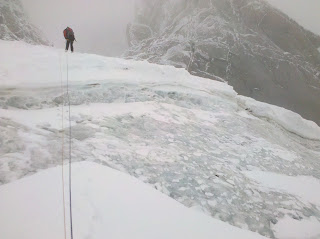 Overall the guys had a great and unusually wintry ascent of the V notch. Thanks Jon!