Tom and Andy are a couple of very intelligent and engineers from the Eastern US. They work for the Department of Defense to help keep all of us Americans safe. They are also experienced mountaineers. Why then have they had so much trouble summiting mountains in the Sierra together over the past decade?

Altitude is probably blamed by many as the number one reason for aborting High Sierra climbs. It’s usually not conditions, as so many of the peaks are mostly rock. It can certainly be weather, but Sierra weather is so good generally in the summer/fall climbing season that it only occasionally thwarts climbing objectives. Sometimes it is underestimating technical difficulties. Other times it is simply running out of time. It’s hard to believe, but Tom and Andy told me stories of failure for all of the above reasons over the years. I have to give full respect for their sense of adventure and willingness to go for it, but a tiny bit of guidance in managing their previous climbing trips would have likely prevented some of their Quixotic adventures from going slightly awry. Fortunately they avoided major accidents. 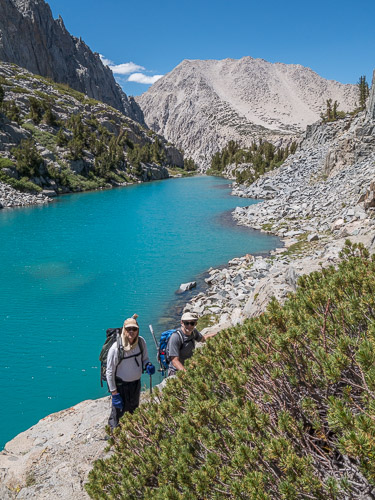 I met Tom and Andy recently on a warm July evening at Finger Lake, just after dinner time. Due to the extensiveness of their climbing/camping experience (albeit with relatively few successful summits) we agreed to help them save some trip costs by meeting them in the backcountry. We allow for this on occasion, when people seem to have the experience and desire to do part of the trip on their own. They also wanted to allow an extra day to acclimate at Finger Lake and they had arrived a whole day prior. When I arrived, they seemed to be slightly anxious about the upcoming climb of Middle Palisade, which stands towering and imposing above the camp. It was quickly apparent that they were not sure which mountain Middle Palisade was, or where our route would go. I assured them in a calm manner that in spite of some recently unstable weather, the forecast looked pretty good with still a slight chance of isolated thunderstorms in the afternoon, and that we should plan to have a fine alpine day if we can move early and efficiently. I told them we should leave camp by 4:30, giving us about 45 minutes of hiking darkness. For most guided groups, eating breakfast, drinking 1-2 cups of coffee/tea, bathroom, and final packing takes around 1.5 hours, and that we should wake up at 3am. At that point Andy choked and said, “You know, I am really not a morning person at all and I prefer to get up later when I climb.” My response was, “I rarely have started too early in the mountains. This is how we set ourselves up for success and allow time for the unforeseen.” I also pointed out that since they were from the East Coast, the time difference should put them at a casual wake up time. Andy reluctantly agreed. Tom was pretty amenable to it all.

Throughout the trip, more details of Tom and Andy’s approach and acclimatization plan started to emerge. As it turns out, their approach the day prior was 7+ hours and they lost the trail forcing them up a steep and bushy drainage. (for comparison it took me 2.5 hours on my own and carrying my own 2 person tent and the technical climbing equipment). They had a GPS with map software but inexplicably were unable to use it to find the trail after they lost it. Their packs contained unnecessary added weight, so they were knackered by the time they arrived at camp. Their extra day of acclimating consisted of sitting in camp all day. Though this likely had some beneficial effect, a light hike up to higher elevations would have been more effective and also helped tired muscles to recover from the approach effort. On the morning of the climb, I expected them to eat a healthy breakfast and hydrate. They each ate 2 Ding Dongs and had no hot drinks. I jokingly called it a “breakfast of champions” but tried to encourage them to eat and drink more/better. 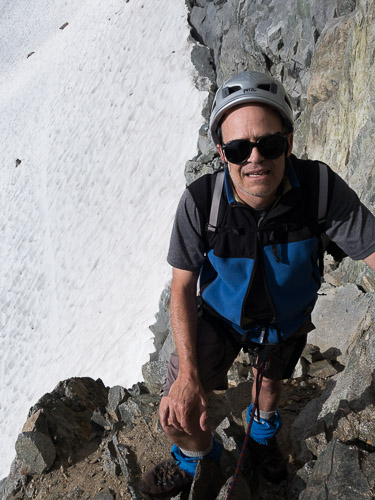 After 1.5 hours of morning approach, interrupted by a 20 minute break, Andy was done. Climbing up the steep moraine slope he moved for 5 minutes, then stopped for 5 minutes. He had zero signs of altitude illness (and he was on prophylactic Diamox) but he just didn’t have the energy to move slowly upward anymore. Tom was doing pretty well, and he was surprised that Andy was faltering. Tom said, “but Andy is in much better shape than I am,” (though this did not appear to be the case to this outside observer). Andy agreed to hang out by a nice waterfall on a sunny bench where he could take a nap and wanted to make sure Tom could still climb. Tom and I continued upward.

Tom felt bad for Andy, and so did I. Andy was Tom’s mentor in the mountains. After Andy got into climbing mountains with guides (he had been on many Cascade Volcanoes and even to one of the lower camps on Cho Oyu), he convinced Tom to join him on some unguided climbing adventures. Tom had greatly enjoyed being in the mountains, but he admitted to me that this would probably be his last trip – after he climbed Mt. Russell next.

They planned to climb Mt. Russell’s East Ridge this year without a guide again. They had actually been there 4 times before. They had tried to climb Middle Pal before too in 2011, but it was too snowy. They didn’t realize this until they ran into snow somewhere on the approach above Willow Lake and turned around. Tom told me about their Mt. Russell adventures. They had a couple failures, including one where, while approaching off-route, Tom tripped and broke his ankle, requiring a helicopter evacuation. One time they tried to climb it in a day from the car but they had very little alpine rock climbing experience and they pitched out every inch of the ridge (probably more dangerous than soloing for some people). They had to turn around and reverse it the same way when they ran out of daylight. I asked when they started from the car… 7am.

During the climb on Middle Palisade, Tom was becoming increasingly sold on the benefits of a guide. The pacing, tracksetting, and added security was working for him and he said the climbing felt easy. The routefinding was tricky in his mind and he admitted he would have had no chance of finding the route on his own. I offered that we could provide a guide for them on Mt. Russell if they would like. He agreed that sounded like a great idea, to increase their chances of success for their 5th attempt, especially since Andy had to tap out on Middle Pal. We summited and descended in style and at the base of the snow I suggested we have a snack and a drink before the long remaining scree and talus descent to Andy. Tom said, “yeah that sounds fine, but I am out of food.” I looked at my watch. It was 11:45am. I said, “Tom do you want some of my food, I have extra.” He said, “No thanks, this is how I usually do it in the mountains.” I said, “What if we were going to be up here until late afternoon?” and he sort of finally acknowledged that maybe he should have done something a bit differently than he was habitually accustomed to. 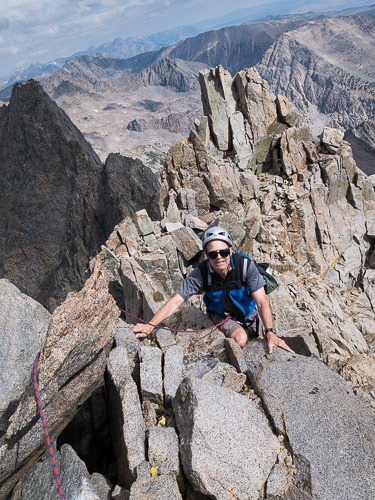 When we reunited with Andy on his bench at around 1:30pm, he was doing just fine. Bummed that he didn’t have the energy to join us on the summit, but knowing that he just didn’t have it on that day. He said, “This is how it usually goes for me. I don’t make it on the first climb of the trip.” As we descended together, I overheard Tom and Andy talking about the next Middle Pal climb for Andy, and Tom gave a glowing recommendation for using a guide. Tom also suggested a guide on their upcoming Mt. Russell climb, an idea that Andy dismissed outright with a scoff akin to “hell no, don’t worry, I’ve got this.” Talking more to Andy, it became clear that other than 2 Ding Dongs that morning, he had eaten very little on the entire trip. He said he just didn’t have an appetite, except for Ding Dongs. I explained that especially after the effort of their approach day, it was important to have adequate nutrition. All they had was junk food, and they didn’t even eat enough of that. I suggested they try meal replacement shakes next time to help them get down the calories and nutrition they need.

We have been running a lot of trips this summer where we meet folks out in the mountains for the technical guiding part. Most of the time it works out pretty well, with the right people, but often the value of the guide in the beginning of the trip is overlooked as critical to the success of the climbing. Guiding an East Buttress of Whitney earlier this season we saw a stark contrast between 2 different approaches. We slowly and steadily hiked up the North Fork of Lone Pine Creek and below the Ebersbacher Ledges, a group emerged from the brush like rabbits. It was a reasonably fit looking climber misleading his group of 2 other friends off route. They found themselves bushwhacking frantically with time and energy lost. One of their group members looked fully worked, already. At altitude, you don’t get wasted energy back easily. They said they were headed to Iceberg Lake to camp and then the East Face route the next day. We watched as their route finding error and inefficiency in the first 40 minutes, compounded and plagued their entire trip. Though they were younger, fitter, and generally faster than us, our steady, efficient pace, and spot on navigation allowed us to arrive to camp 4 hours ahead of them. They arrived as it started to get dark. This resulted in a late wake up late the next morning and they opted out of the East Face for the Mountaineer’s Route. This climb then took them all day and they were stuck navigating snowy 3rd class terrain in the dark. They did not bring crampons or ropes because the snow was soft in the daytime, but by the time they got there it was becoming firm and we watched them take a very long time to find their way down as night fell. We had to stake their poorly secured tent down to prevent it from blowing away in increasing winds, an outcome that would have led to quite an epic finale. I suspect that had their approach been more efficient, they may have had a better and more enjoyable climb, and maybe been able to try their originally intended technical route. I am not sure that they would share the same analysis.

People sometimes forget what guides can do to help make a technical climbing trip successful, even in a friendly mountain range like the Sierra, and even where the terrain is nontechnical.

As for the story of Tom and Andy… they went back to Mt. Russell, and Andy bailed again, early on the approach. Tom called me, a bit exasperated, “Andy is done. Can you still get me a guide this week for Mt. Russell?”
“Absolutely! But this time, you approach with the guide, eh?”
He agreed and, on his 6th attempt, with thunderstorms in the forecast, in spite of his habitual insistence on bringing up his extra climbing shoes and 3 litres of water, Tom and IFMGA mountain guide Neil Satterfield made it to the top in just over 3 hours, then back down and out just before the first drops of rain hit the Portal.

Tom’s parting words: “What should we climb next?”