The North Ridge of Mount Conness

Posted at 00:06h in Trip Reports by Howie Schwartz
I met Jim at his hotel in Lee Vining at 5am.  We wanted to get an early start to make sure we were off the summit before the forecasted thunderstorms hit.  We threw his gear in the car and drove up the the Saddlebag trailhead.  The first boat taxi wasn’t until 7am so we did the hike around the lake and caught the sunrise on Conness with perfect alpenglow.  We hit the start of the ridge at 8:30am and we could already see some harmless puffy clouds starting to form.  We decided to go for under the pretext that we would try to be as efficient as possible and bail if the weather came in on us.  Jim did great on the ridge and moved well as we surmounted the first tower and did the rappels to the start of the fifth class.  After changing into his rock shoes Jim sent the upper pitches of the North Ridge enjoying the great rock and awesome exposure. We reached the summit (12,590) at noon, took a few photos and started our descent as the previously harmless looking clouds were getting darker and bigger.  About a mile from the car we enjoyed the thunder and rain for the rest of the trip. Thanks to Jim for a great day out! 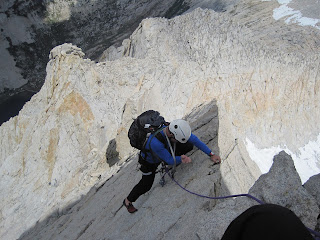 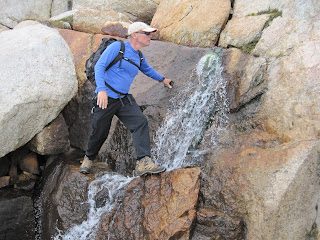 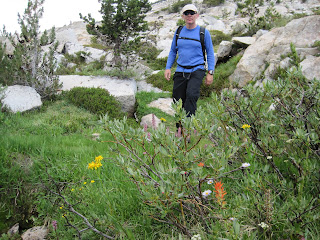