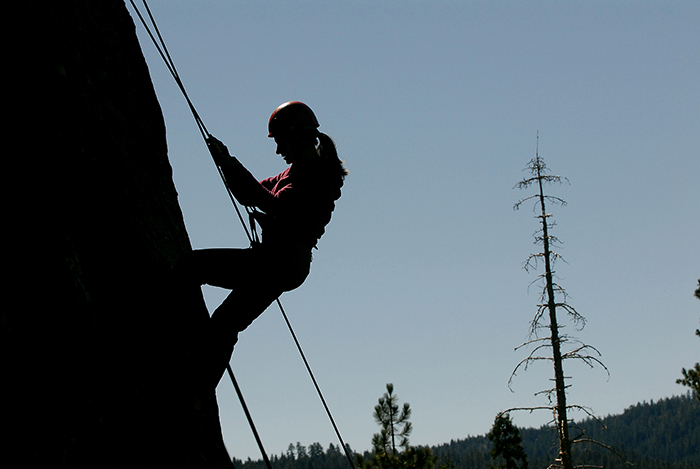 The Leap is an incredible and accessible venue for rock climbing.

The Leap is an incredible and accessible venue for rock climbing. We offer regular day climbs for all levels on this outstanding Sierra granite cliff.

An amazing place to climb and train for all of your High Sierra alpine rock aspirations.

Tucked away in the sleepy little community of Strawberry just east of echo summit lies a moderate trad climber’s paradise. Nobody climbed at The Leap until 1950 due to the dominance of Yosemite Valley climbing and the fact that at the time the Leap was a very dirty cliff. The first published record of a leap climb was in 1953 and soon after a couple of classic climbs were established including Bear’s Reach 5.7. The rest of the fifties and early sixties were fairly uneventful until 1965 when TM Herbert and Doug Tompkins climbed The Line that went at 5.5 A3 due to all the dirt in the crack. Traveler Buttress was freed in 1966 one of North America’s 50 classic climbs and possibly the Leap’s first 5.9. The years from 1963 to 1978 the Golden Age of climbing at the Leap was when almost all the classic lines were established by some of the most iconic climbers of their time including TM Herbert, Dick Long, Warren Harding, Tom Higgins,  and Royal Robbins. Royal Robbins even ran a climbing school at the Leap from approximately 1967-1971 putting up new routes like Fantasia 5.9 R and introducing people to the joys of climbing.

The Golden age is over but there is still plenty of adventure for anyone ready to learn the prerequisite skills needed to climb multi pitch trad. The wide variety of moderate climbing styles including slab, face, and crack are stacked up one after the other giving the aspiring trad climber plenty of variety. The traditional climbing ethics of the area means there are bolts only where necessary and very few bolted anchors giving you ample opportunity to hone your skills placing protection and building anchors. The choice of different itineraries in various different areas means you can easily plan a day around your climbing ability starting with a 5.5, 5.6 day to a 5.10 day all on well protected predominantly solid granite. Despite the generally lower commitment of the climbs there is still some loose rock to be aware of and you will need to leave gear behind if you have to quickly escape a route helping you to start acquiring the judgement necessary for more committing routes. All of these unique qualities coupled with ease of access make Lover’s Leap an amazing place to climb and train for all of your High Sierra alpine rock aspirations.