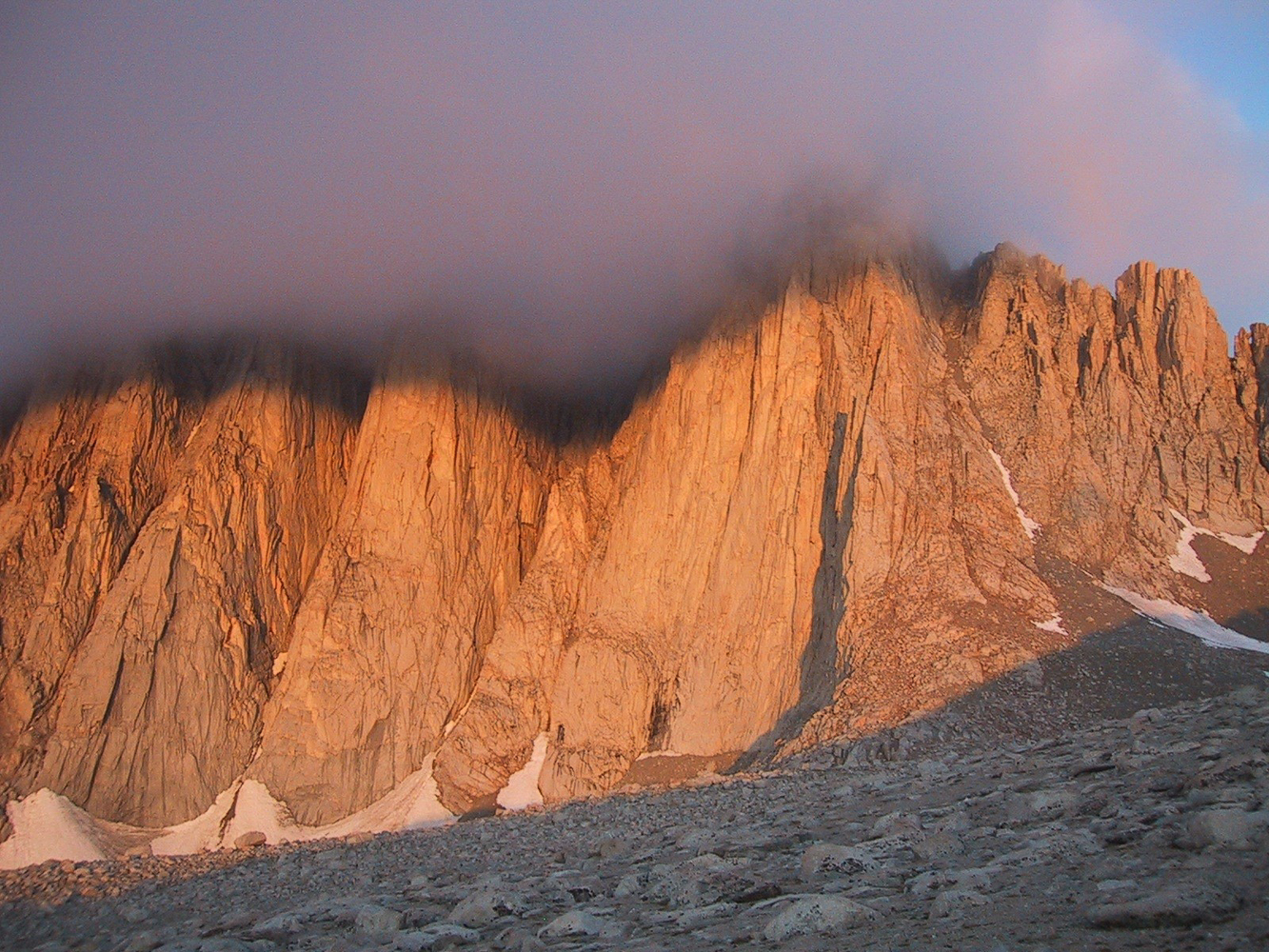 Climb Mount Whitney, the highest peak in the 48 states, by a classic technical rock climb from the East.

Climb Mount Whitney, the highest peak in the 48 states, by a classic technical rock climb from the East. Choose the East Face or the East Buttress. Which is better? Tough call and often debated. Climbing them both is the only way to know for sure!

Access to Mount Whitney is closely regulated and as a result we have limited first-come first-serve availability for mid-summer climbs. We recommend booking early. Before July 4th and after Labor Day, we have much more availability.

The dates we have scheduled here have a minimum of 2 to run and a maximum guiding ratio of 2:1. This trip is also offered as a Custom Private Trip at our Custom Private rates.

Mt. Whitney is the highest peak in the lower 48 United States at 14,505 feet above sea level.

Mt. Whitney is the highest peak in the lower 48 United States at 14,505 feet above sea level. The survey marker at the summit still says 14, 494 feet, but the latest surveys show it is higher than that. It is still not totally agreed upon what the mountain’s altitude is and much depends on what exactly is considered the “sea level” that will be used as the baseline. The consensus among surveyors seems to be that the elevation of Mt. Whitney will only be corrected upwards if at all in the years to come, and the mountain is in fact growing along with the rest of the range on a geologic time scale. We certainly hope though that we will see it rise enough in our lifetime that Sierra peaks like Mt. Barnard and Mt. Humphreys are raised to 14’er status. We just think that would be infinitely amusing (but did you really need another reason to go climb those amazing peaks?).

Almost named “Fisherman’s Peak” Mt. Whitney was first climbed in 1873 by the “fishermen”; John Lucas, Charles Begole and Albert H. Johnson.  The local Paiute Indians, named Mt. Whitney, Too-man-go-yah- (the very old man) and as legend has it a Great Spirit lives inside the mountain and watches over the people from his high perch.  People of all ability levels flock to stand on its broad summit.  The overwhelming majorities stumble to the top via the Mount Whitney Trail.  In the summer months it is not uncommon to have several hundred bleary-eyed people talking on cell phones and making movies on the summit. From the east the peak is much quieter and looks much more impressive guarded by its sheer granite walls. We offer trips on several different east side routes including the Mountaineer’s Route, the East Face, and the East Buttress. The latter two are some of the best 5.7 alpine climbs in the range for rock quality and aesthetics of position.

“Which route is better, East Face or East Buttress.”  Read more here to find out.

East Face (5.7)
The East Face route is one of the 50 Classic Climbs in North America. Get your game on early with the “Tower Traverse” that delicately climbs along narrow ledges above the full relief of the East Face of Mt. Whitney. You’ll be blown away by the, “The Fresh Air Traverse” with airy position and big handholds. Dr. Robert Underhill, a member of the first party to climb the route in 1931 exclaimed, “The beauty of the climb in general lies chiefly in its unexpected possibility, up the apparent precipice, and in the intimate contact it affords with the features that lend Mt. Whitney its real impressiveness.”

East Buttress (5.7)
The East Buttress is only slightly more difficult and sustained than the East Face. It was originally named the “Sunshine Peewee” route by the first accent party. This route represents the cleanest, most direct line from high camp to summit. It features high-quality climbing on good granite up the buttress to the “Peewee Pillar”, a gigantic block precariously perched on the buttress. The route continues around the pillar for a few more perfect crack pitches to the summit.