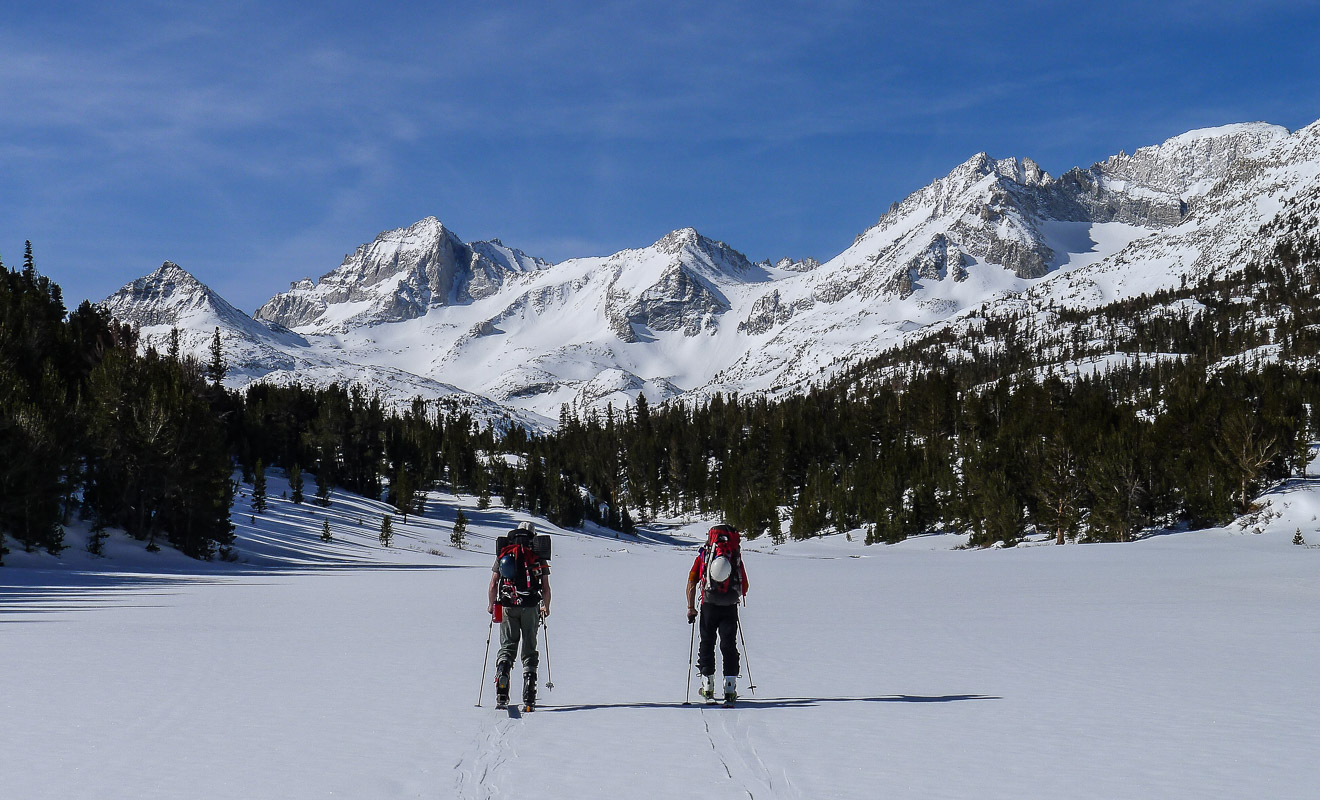 Rock Creek to Mammoth traverses over 30 miles of rugged and wild high country while tagging some of the baddest and most coveted ski lines in the Range of Light in an adventurous 8-day itinerary.

One of the grand tours of the Sierra Crest, Rock Creek to Mammoth traverses over 30 miles of rugged and wild high country while tagging some of the baddest and most coveted ski lines in the Range of Light in an adventurous 8-day itinerary. Not intended as an introduction to ski mountaineering, but rather as a graduation from a healthy apprenticeship in the art of light, fast, and technical ski travel. Not a recommended tour for snowboarders, but we can put together a custom variation upon request.

This tour is being offered at this price with a minimum of 2 to run on April 3-10, 2022, or on a custom, private basis.Best season is generally mid-March through mid-April.

The ski options are endless and the scenery is spectacular.

Like many of the finer things in life, ski terrain improves with age. Geologically, the colorful “roof pendant” rock formations were formed from ancient sea beds before the Sierra Nevada Range existed. When tectonic forces pushed granitic rock through the roof of this strata it lifted and cracked the Earth’s overlying crust. The subsequent erosion has given us a magnificent ski mountaineering paradise. The biggest and best steep ski lines in the Sierra are found in long swath of ancient stone on the Eastern side of the Sierra from near Independence all the way to Bridgeport. Rock Creek to Mammoth contains some of the most dramatic, remote, and skiable terrain of all of it. This tour starts in the granite of Rock Creek and traverses west of the Crest to access Mount Gabb and Mount Mills then north through the Mono Recesses to reach the colorful McGee Creek headwaters, Red & White Mountain, Red Slate Mountain, upper Convict Creek, and finally Bloody Mountain to finish in the Mammoth Lakes area.

This 8-day adventure is an accessible tour that starts in the comfort of the Mosquito Flat Hut. It proceeds to travel through some of the most remote, yet classic ski mountaineering terrain in the range. The ski options are endless and the scenery is spectacular. If you have the time and the skills for it, this one is tough to beat.

Meet for equipment check and final packing in the morning in Mammoth Lakes. 5 miles to Mosquito Flat Hut and then off for a warm-up ski tour in the vicinity.

Breakfast at the hut and tour up the beautiful Rock Creek drainage. Surmount Cox Col on the shoulder of Bear Creek Spire to access camp on the west side of the Sierra Crest.

From here we will pick a ski objective based on the group and conditions. We could go to Bear Creek Spire or Mt. Abbot for a steep, rocky summit and ski down, or something on the Mono Divide, like Mount Gabb which has challenging steep skiing lines on its North and South faces. Over Gabbot Pass and down to Upper Mills Creek Lake for the evening.

Ascend steep slopes in boots and crampons toward an elusive passage we discovered which leads to the north side of Mount Mills. We then ski the grand North Face of Mount Mills from a high point and descend the upper 4th Recess to a col that allows us to access the 3rd Recess. If conditions are good we may stay and ski some steeper lines in the 3rd Recess. Otherwise we will descend the beautiful drainage all the way into the trees in Mono Creek and up the other side into Hopkins Creek. Camp at Upper Hopkins Lakes.

Early start and ascend north to Hopkins Pass. This is a very cool place to be on skis. The north slope drops us to the base of the Southeast Face of Red and White Mountain, one of the finest ski peaks in the Sierra. If conditions are right we will ski from the summit down the face, pick up our gear and descend to camp near Big McGee Lake.

Upper McGee Creek is a ski mountaineering paradise. We can ski another line on Red and White or ski countless other beautiful features in the colorful rock of the area. The south face of Red Slate Mountain is a steep and proud line that does not get skied very often. Return to camp.

Between McGee Creek and Convict Creek there is a wild passage that was built for ski travel we follow this weakness, dubbed "Corridor Pass" easily to Constance Lake where we drop extra weight and prepare to ski a line on the crown jewel of the northern High Sierra - Red Slate Mountain. The Red Slate Couloir from the summit is the ski mountaineering pinnacle of achievement for most diehard Sierra skiers. If you are up for it and conditions are perfect, we'll go there. Otherwise, we will look at the Northwest Face or another line. After the ski we will follow a series of drainages and lakes northward toward Lake Genevieve to camp.

The final day is spectacular and has a few different options. The ideal option for most will be to ascend to the Bloody-Laurel Col and drop into the Laurel Lakes Basin. From there we can stage an ascent of the north side of Bloody Mountain to access the Bloody Couloir. Descend this classic Mammoth big line and ultimately descend to the Sherwin Creek Road in Mammoth. An alternative is to descend Convict Canyon and possibly ski a line on Mount Laurel or Mount Baldwin on the way.

$1335
The Sawtooth Range lies on the northern border of Yosemite and contains one of the most rugged and beautiful ridges on the Sierra Crest. This is a classic tour that we offer with a new variation we discovered that provides more exciting skiing.
4 Days