Jimmy and Jack are some pretty cool cats, and they are down for adventure. Hailing from the east coast they have also fallen in love with the eastside of the Sierra with its blue skies and granite peaks. They have shared views of these peaks with their families and they have dreamed of the opportunity to climb them with a local, professional guide. I met Jimmy and Jack last summer during a crack climbing and self-rescue skills day we did in Rock Creek. They put the climbing training to good use on a climb they did together, unguided, on the West ridge of Mount Conness, a Yosemite alpine classic.

Ready for more, Jack and Jimmy began planning this summer’s alpine adventure in January. They had been dreaming about more sunny Sierra ridge climbing. We decided to go for the ultra-classic Palisade Traverse, from Thunderbolt Peak to Mount Sill. The Palisade Traverse is an enchainment of five 14,000 foot peaks. Though it is often traversed by strong and unroped alpinists in a day, it is fun to do it more safely with a rope and as an overnight. There is nothing as spectacular as waking up to alpenglow while spooning a 14,000 foot high block of granite. Starting at Thunderbolt Peak and the V0 boulder problem to summit the adventure follows the ridgeline to the airy “milk bottle” summit of Starlight Peak, and then continues rather technically to the summit of North Palisade. Our plan was to bivouac near that summit and on the 2nd climbing day move on to do 2 rapells down into the U-Notch and up to the next summit of Polemonium Peak, named after the blow-pop shaped purple flowers that grow only in the high alpine around granite boulders and in cracks called “sky pilot” or Polemonium. The last stop on this traverse is the mighty Mount Sill, which divides the drainages of the north and south forks of Big Pine Creek, as well as the Owens Valley from Kings Canyon.

Most of these 14ers in California require some technical skills and gear to access them and their summits are often times remote, many miles from the nearest trailhead. There have been several occasions where guests of mine who have in the past climbed many or all of the Colorado 14ers have been humbled by the short list of California 14ers. That is not to say that all of the 14ers in California are challenging objectives. There are a few with trails right to the summit – such as Mt. Whitney that has an 11 mile circuitous trail that John Muir famously states was for soft, succulent folks. Mt. Muir has a short scramble from the Whitney Trail, and Mt. Langley and Mt. Russell are not too difficult or far off the beaten trail. The easiest to attain 14’er is White Mountain which has a road most of the way up the peak and an easy walk up a gated road to the summit. The High peaks of the Palisade group require at least 3rd class scrambling and often some wickedly exposed class 4-5 cruxes, not to mention and some navigation skills, solid preparations, and good mountain judgment. The Palisades are about as big as the entire Teton Range in Wyoming, and every bit as alpine.

With Jimmy and Jack, our planning for this trip continued into the spring. We talked a lot about the amount of snow that we could expect in June. After 4 drought years in California – we were finally seeing an average year in snowfall amounts, and cooler spring temps were keeping things snowy in the elevations above 10,000 ft. Prior to Jimmy and Jack flying out, California experienced a week of heat that had the valley temps below the palisades sitting near daytime highs for several days nearing triple digits. This in conjunction to our planning to do the traverse close to the summer solstice (combined with a rare full moon on the solstice) made it look like we would have a snow free ridgeline to traverse with the added bonus of snow patches in the shaded areas. 3 days before the start of our trip the mountains had a different plan.

3 days before the start of our trip the mountains had a different plan.

On the weekend of June 11-12, the skies opened up and the mountains were socked in with lots of moisture. Cold and heavy rain fell in the lower elevations causing the hostels, campgrounds, and bars in both Mammoth and Bishop to swell in numbers with PCT hikers evacuating the backcountry to dry out gear and get out of the snow.

Jimmy and Jack got to observe the storms while working on their acclimatization for a few days before we met by doing some day hikes to ~11,000 feet that I had suggested, and getting some remote work days done during the rain and bad weather from their hotel room in Mammoth Lakes at almost 9,000 feet. We discussed some possible alternatives to avoid challenging conditions in the high moutnains, but like true alpinists, Jimmy and Jack were motivated to get into the mountains. We stuck with our Palisades plan.

I’ve often said that Bernd is “curiously strong,” like an Altoid Peppermint.

Austrian IFMGA guide Bernd Zeugswetter and I would be the SMG guides on this trip and I was excited to work and spend some time in the mountains with Bernd. Bernd initially comes off as an intelligent quiet and well-mannered individual. Skinny with glasses Bernd reminds me of high school friends of mine who excelled at math and chemistry more than sports. He accents his outward appearance with discussions about his wedding photography website and homeschooling his 9 year old son. Somewhere beneath this “Clark Kent” like exterior lies a very talented climber. Bernd has ascents in the Alps and Patagonia under his belt, and can throw down 5.hard sport routes like nobody’s business. I’ve often said that Bernd is “curiously strong,” like an Altoid Peppermint. As I spend time catching up with Bernd on the trail approach I learn about his plans to sneak over to the valley for a quick one day attempt of the Freerider variation of the Salathe wall… Objectives like this tend to lie out of reach for us working class guides who rarely get to climb extremely difficult pitches while working but Bernd manages the life, work, family, climbing, and guiding balance with what appears to be enthusiasm and ease. [Editor’s note: Viren has a slight crush on Bernd.].

After our morning gear shakedown and group food distribution, as well as a few last minute purchases in the categories of boots and warmer gloves, we began our hike out of the South Lake parking area. We were greeted by stiff winds that peaked at 55mph gusts later in the day.

Clear skies turned to isolated clouds ripping across the crest as we hiked into the snowline, and after some elevation gain we were kicking steps in the new snow.

Our plan was to camp right near Thunderbolt Col on the west side of the Palisades, but due to the high winds and an unappealing thought of digging out a snow platform, we opted for camping about 30 minutes below the col at a flat bench below Mt. Winchell in stunning Dusy Basin. The wind sheltered camp was a great place to view the constant clouds ripping overhead that seemed to remind all of us of watching a very high speed time lapse video. Once we had finished our dinner and water was filled for the morning we hunkered down in our tents as the temperatures dropped below freezing overnight.

The next morning we woke early and after hot drinks and some breakfast cruised up the final slope to Thunderbolt Col. Often times this is steep and blocky but our morning hike was on nice frozen Styrofoam neve snow that took a crampon and required little effort to ascend. We quickly reconfigured to harnesses and helmets at the Col before entering in the Southwest Chutes #1. We spent a few hours walking up the firm snow in crampons with one technical pitch of rock. At the top of the couloir the large boulder that we often tunnel under was buried and we had to mantle on top of it to get a view of the final pitch before the summit block. I was happy to have a belay as I plugged in gear before doing exposed moves in crampons to avoid wallowing in the snowed in cracks. Bernd and I belayed from a flat ledge below the summit block. As Jimmy and Jack gazed across at the snow covered ridgeline we discussed our options. It was a really neat opportunity to do a wild alpine traverse with Alaska or Patagonia style conditions, but in California sunshine and temps. Due to the fresh snow we would be climbing that day to the notch between and up to Starlight and the bivy sites on North Palisade. The combination of Jack’s cold fingers, Jimmy’s onset of acute altitude illness, and the 30+ pitched out sections of climbing mixed rock and snow terrain in crampons ahead led to the ultimate decision to turn back in favor of climbing warm, dry rock at lower elevations.

The wind sheltered camp was a great place to view the constant clouds ripping overhead that seemed to remind all of us of watching a very high speed time lapse video.

It was bittersweet to leave the Palisades. It is always special for me climbing on that ridge, and the conditions were a rare anomaly where it was more mixed and wintery, with more sections of climbing in crampons in June than people often experience in winter. It is truly fortunate to experience such an incredible place with such great mountain spirits as Jimmy, Jack, and Bernd. We all recognized that abandoning our original objective was the right thing to do. We climb mountains on their timeline, whenever they allow us passage. We did not summit 5 14’ers, but the reward of climbing just one in conditions like that with reasonable safety and enjoyment was in many ways an incredible and memorable accomplishment for all of us. Good thing we had plenty of fun climbing to do down in the Owens Valley. No doubt Jimmy and Jack will be back soon for another Palisades high alpine adventure! 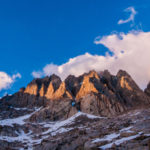 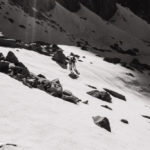 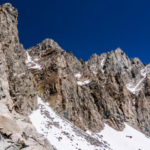 The Palisades from Thunderbolt Col 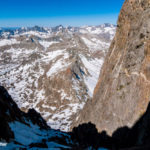 Looking to the west into Kings Canyon 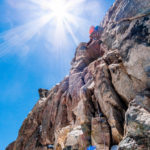 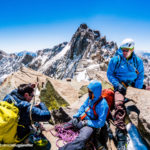 Jimmy, Jack, and Viren on the bench below the summit of Thunderbolt Peak with North Palisade and Starlight Peak in the background. 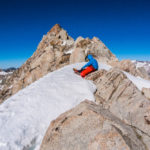 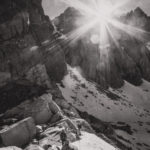 Our team transitions at Thunderbolt Col with harnesses and Helmets as we warm up in the first sun rays of the morning. 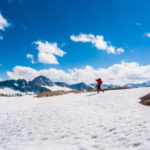 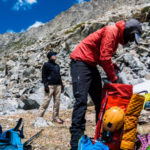 Viren digs in his pack for yet another snack 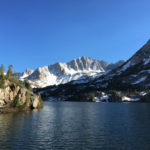 Long Lake and Mt. Goode in the background. One of the best views relatively close to the car.