A Letter to Dustin

09 Aug A Letter to Dustin

Posted at 16:41h in From the Range of Light & Fast, Guide Tips by Howie Schwartz

On a beautiful trip to the Williamson Bowl in the High Sierra this week, we set up camp near one of the pristine alpine lakes at around 12,200 feet. Soon after setting up our tent, we discovered, in a rock hollow, your cache. At first we thought perhaps this camp area had already been claimed by someone, but then we noticed it was just a small hydration pack with an old (first generation vintage) Therm-a-rest sleeping pad attached to it. This seemed an unusual selection of gear to leave temporarily. I touched the pack and realized it was soaked with water and covered in dark blotches of mildew, indicating it had been abandoned for some time, and certainly from during this summer season. We left it alone and finished setting up camp and cooking dinner.

The next morning, we awoke and prepared to move camp. We were uncertain about what to do with the mysterious cache. Could it have been left in distress by a hiker or mountaineer in an emergency? Could it be a clue to the whereabouts of someone lost in the mountains? Was it simply forgotten, or left accidentally by someone who could not find where they cached it in the dark hours of night? We decided to open it to see if we could glean more information.

Inside we assessed the contents, all of which were growing mold: 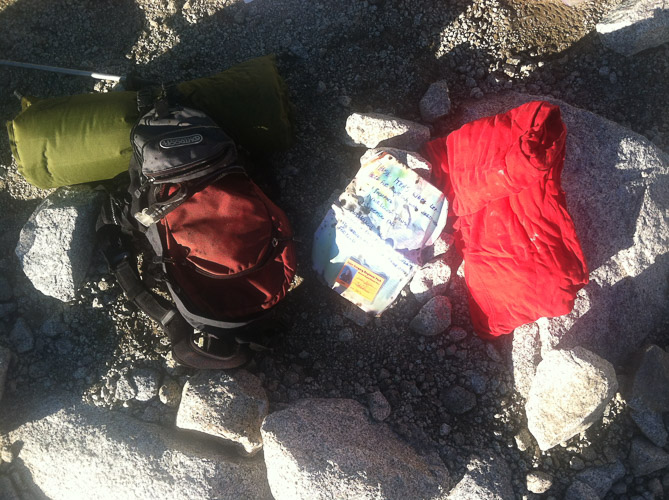 THESE ITEMS WERE LEFT FOR ANYBODY WHO NEEDS THEM.
– 1 BACKPACK
– 1 PAIR LONG JOHNS
– 1 SLEEPING PAD

ALTHOUGH THE
SLEEPING PAD DOES NOT INFLATE,
IT SERVES AS A NICE BARRIER FOR COLD. 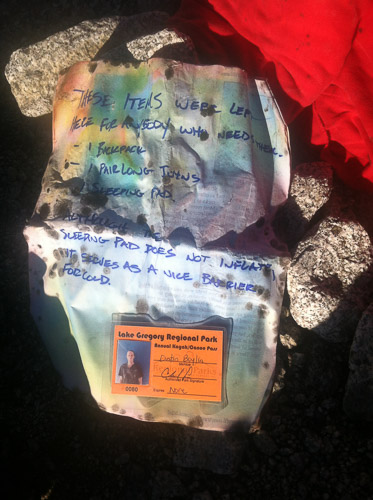 Thank you for being a concerned and considerate fellow wilderness traveler and citizen. Your gift of items for the rest of us is very generous indeed. I am sure that it eased your burden to not have to hike out from such a remote location with that extra gear, and it likely made you feel that you were doing something beneficial for others at the same time. A win-win situation. On the other hand, there are several seemingly obvious reasons why leaving this gear up there was not such a bright idea:

1.  Nobody wants to put on your long underwear. It would have to be the most dire of survival circumstances to put on someone else’s found, potentially pre-worn underwear of any kind. In the impossible circumstance that someone was actually desperate enough to put on your soaked and moldy skivvies, it would have only made their situation MUCH worse. They might even die instantly. 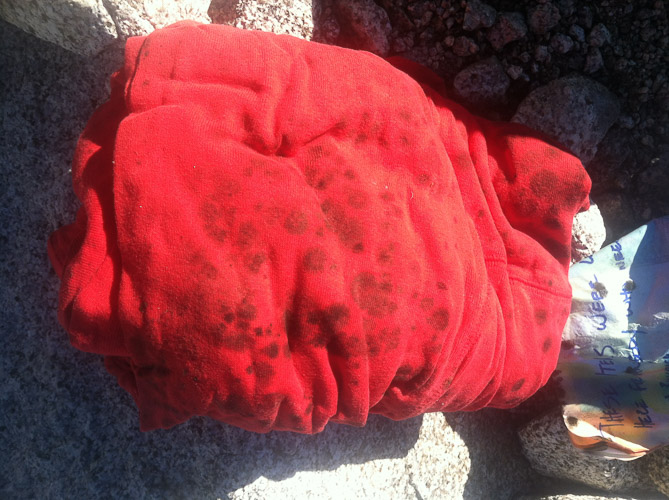 2.  An inflatable mattress with a hole in it is about as useful as a chocolate teapot. The old Therm-a-rest was one of the most heavy duty and comfortable inflatable pads ever made. Unfortunately, one with a hole in it is really not comfortable, nor does it serve as much of a “nice barrier for cold.” It would be much warmer to crawl inside a trash bag and curl up on a backpack. Who would intentionally come up to Williamson bowl to spend the night without a sleeping pad of their own already packed? Perhaps a straggling day hiker attempting to descend in the dark could use the sleeping mattress, but such a person would have found your emergency cache about as easily as you finding your car keys if they fell out of the boat sometime during an hour tour of Lake Gregory.

3.  Nobody who goes up to visit Williamson Bowl needs your backpack. If they had no backpack to get them that far, then what would they need to put in a backpack at that point? Were you thinking, “Hey this could be useful for all those people who are tired of carrying their extra food and clothing in a grocery sack all day?”

4.  In the mountains, things get wet from precipitation. It may take slightly longer to get things wet in a rock hollow, but they do get wet. Once they are wet they will also take longer to dry in such a shady location. In this case, the pack and its water absorbing contents stayed very wet and promoted the growth of mold, which rendered all of the items completely useless.

5.  A Sharpie? Is this for using your stuff as a makeshift register for all future users? People could write things like, “August 18th: used long underwear bottoms but not tops. Great pack, carried well but smelled funny. Sleeping pad was great barrier for cold.”

6.  A cache like this will get destroyed very quickly in the mountain environment. The elements of sun, wind, water, and microorganisms will eat away at fabrics. Rodents and birds will chew and peck on these things and make a mess, which gets into the water sources and into the digestive systems of the animals. The seasonal Sierra snowpack as it settles, creeps, and glides is strong enough to bend fence posts and crush cars. It tears outdoor fabrics to shreds.

Ethically, we should all study and practice the principles of Leave No Trace to preserve the quality of the wilderness experience for everyone. If everyone adheres to these ethics, there will be no need for fellow users to leave emergency caches for others. Did you pack it in? Then pack it out. Be self-sufficient and prepared in the event of an emergency. Respect other mountain travelers and their experiences. Protect wildlife and prevent animals from getting into your things. And know the regulations for the areas you visit so you can be a good steward. Leaving your things as you did violates all of these important principles.

Dustin, I hope that you can now see and understand that your cache was nothing more than useless trash. The only benefit of leaving it was for yourself, by enlightening your burden for your return to civilization. My companion and I were compelled to haul out your waterlogged waste that had amassed to around 4 pounds. This impacted us in a negative way, but gave us the opportunity to remember why we need to respect the mountains and preserve the wild experiences we are all fortunate to be able to enjoy. 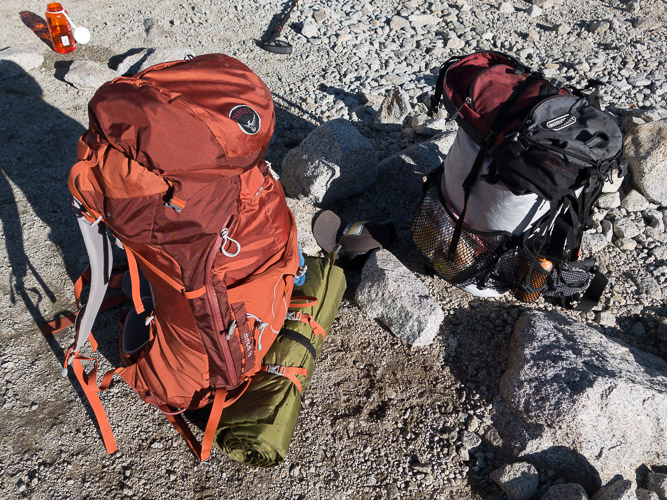 Our ultralight backpacks with an extra 4 pounds of garbage.

As for your identification card… not sure if this sort of letter of gratitude was your intent of leaving that behind. It may be unlikely that you ever come across this on our website, and the opportunity for learning will be lost. For that reason, we will pass it along to our colleagues who manage Sequoia National Park and the Inyo National Forest. If you obtained a wilderness permit, then they should be able to easily track you down and pass this information along, so that next time you will know the deal.